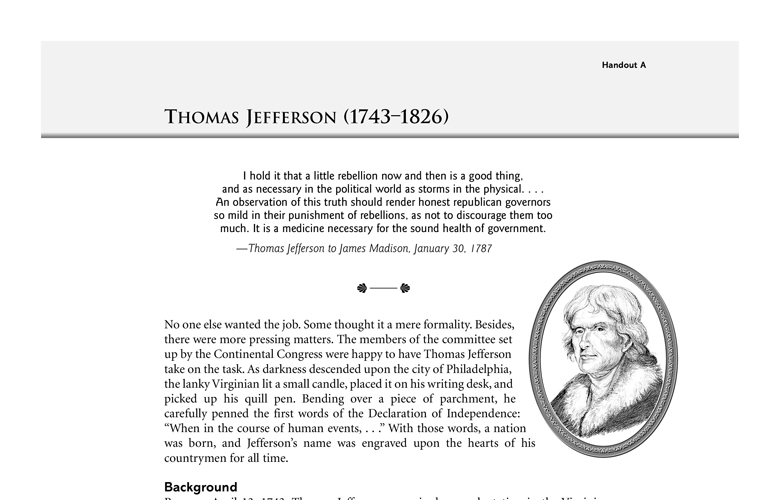 I hold it that a little rebellion now and then is a good thing, and as necessary in the political world as storms in the physical. . . . An observation of this truth should render honest republican governors so mild in their punishment of rebellions, as not to discourage them too much. It is a medicine necessary for the sound health of government. – Thomas Jefferson to James Madison (1787)

No one else wanted the job. Some thought it a mere formality. Besides, there were more pressing matters. The members of the committee set up by the Continental Congress were happy to have Thomas Jefferson take on the task. As darkness descended upon the city of Philadelphia, the lanky Virginian lit a small candle, placed it on his writing desk, and picked up his quill pen. Bending over a piece of parchment, he carefully penned the first words of the Declaration of Independence: “When in the course of human events, . . .” With those words, a nation was born, and Jefferson’s name was engraved upon the hearts of his countrymen for all time.

Born on April 13, 1743, Thomas Jefferson was raised on a plantation in the Virginia wilderness. He began the study of books at an early age. Jefferson was admitted to the Virginia Bar in April 1767 and was later recognized as one of America’s best legal minds. At age twenty-five, he was elected to the House of Burgesses, colonial Virginia’s legislature.

Jefferson soon became known as a champion of American and individual liberty. He worked on the Virginia Committee of Correspondence to oppose British policies toward the colonies. He served in the Virginia House of Delegates from 1776 to 1779. In 1779, he was elected to the office of governor of Virginia. In his Notes on the State of Virginia of 1781, Jefferson expressed his ideas about religious freedom, universal education for white boys and girls, and the importance of property to a free people. He was also successful in pushing through the legislature a bill that established freedom of religion in the state.

The Declaration of Independence

In the Declaration, Jefferson listed King George III’s violations of the rights of Americans. He accused the king of trying to establish “an absolute Tyranny over these States.” Jefferson insisted that all men “are created equal” and that they possessed the rights to “life, liberty and the pursuit of happiness,” which no one could take away. Jefferson’s ideas about rights were not new. He was influenced by the writings of English thinkers Algernon Sidney and John Locke.

The Declaration’s promises of equality and liberty did not apply to African Americans in the late 1700s. Indeed, many of the leaders of the Revolution owned slaves. Jefferson himself had mixed feelings about slavery. He warned that the institution might one day tear the Union apart. He condemned the slave trade and proposed a plan for ending it. But Jefferson owned more than 200 slaves who lived on and near his great plantation of Monticello, and he freed none of them while he lived. He did provide in his will for the emancipation of seven of his slaves, including Sally Hemings (the slave with whom Jefferson is alleged to have had a sexual relationship), her five children, and her nephew.

Jefferson and the Bill of Rights

Jefferson did not participate in the Constitutional Convention in Philadelphia. He was serving as a trade delegate and minister to France from 1784 to 1789. But he was concerned that the people’s rights be protected. He therefore wrote to James Madison about a bill of rights while the convention was in session. Jefferson stated that a bill of rights was “necessary by way of supplement” to the rights already protected within the Constitution.

Jefferson supported many ideas that found their way into the final version of the Bill of Rights. He believed that “no freeman should be debarred the use of arms.” He supported the free exercise of religion and opposed the government’s support of any particular religion. Jefferson also supported the rights of people accused of crimes.

Leader of the Republican Opposition

In 1789, George Washington appointed Jefferson the first secretary of state. Jefferson and Secretary of the Treasury Alexander Hamilton soon became bitter adversaries. Hamilton favored a strong central government and supported Britain in foreign affairs. His success in creating a Bank of the United States was especially alarming to Jefferson. In an effort to block Hamilton’s programs, Jefferson formed what became the nation’s first political party, the Democratic-Republicans (often called simply, “Republicans”). The Federalist Party emerged in support of Hamilton’s policies.

Jefferson resigned his post after three years in office. He ran for election for president against John Adams in 1796 but lost by three electoral votes. Under the original electoral system, Jefferson became vice-president. While in this office, he opposed many of the Federalists’ policies. For example, Jefferson denounced the Alien and Sedition Acts, which were aimed at silencing Republican criticism of the government. Jefferson argued that these laws violated the principle of free speech. In 1798, he wrote the Kentucky Resolutions, which declared that states had the right to disregard federal laws they found unconstitutional.

Jefferson ran for election for president against John Adams again in 1800. The campaign was nasty. The Federalists accused the Virginian of being a “man of party,” not a man of principle. But Jefferson was victorious, and he tried to make peace between the parties. In his inaugural address to the nation, he declared, “We are all federalists—we are all republicans.” In the war between Britain and Napoleonic France, Jefferson accepted the wisdom of Washington’s policy of neutrality in foreign affairs.

During his first term, Jefferson worked to reduce the size and power of the federal government. “That government is best which governs the least,” he declared. To this end, Jefferson reduced the number of public employees, cut military spending, and lowered the national debt. But he put aside his concerns about government power in 1803 when he purchased the Louisiana Territory from Napoleon for $15 million. This land, Jefferson believed, was necessary for America’s future development. It would provide enough space so that Americans could live as independent farmers for a “thousand generations.”

Jefferson easily won re-election in 1804. His second term, however, was a time of foreign and domestic trouble. On the high seas, the British Navy forced American sailors into service on British vessels. This led Jefferson to sign the Embargo Act of 1807, which outlawed American trade with foreign countries. Jefferson dealt harshly with violators of the law. In doing so, he violated the civil liberties of many Americans. Jefferson hoped, however, that the policy would prevent the United States from being drawn into the Napoleonic Wars. The Embargo Act sank the economy into a depression. As a result, the United States was ill-prepared for the war with England that began in 1812.

Jefferson retired to Monticello after his second term. The achievement of which he was most proud during these years was the founding of the University of Virginia in 1819. He designed and supervised the construction of the university and also hired its original faculty. Jefferson died on July 4, 1826, exactly fifty years after the adoption of the Declaration of Independence. A few hours before his death, he asked, “Is it the fourth?” These were his last words.