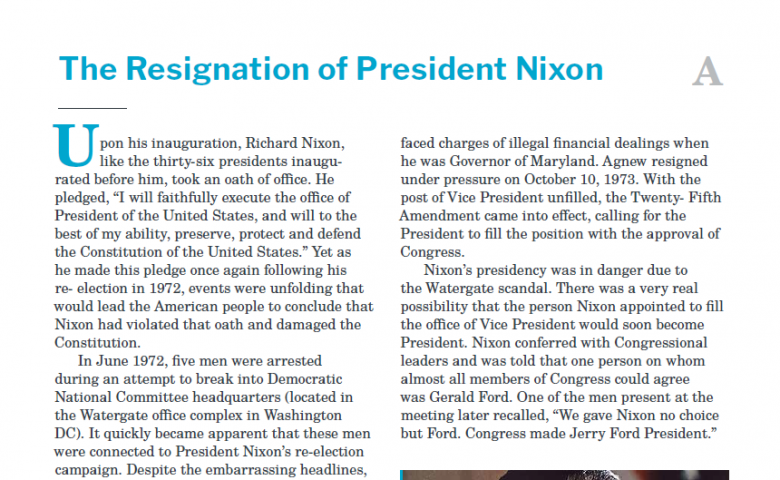 The Resignation of President Nixon

Upon his inauguration, Richard Nixon, like the thirty-six presidents inaugurated before him, took an oath of office. He pledged, “I will faithfully execute the office of President of the United States, and will to the best of my ability, preserve, protect and defend the Constitution of the United States.” Yet as he made this pledge once again following his re- election in 1972, events were unfolding that would lead the American people to conclude that Nixon had violated that oath and damaged the Constitution.

In June 1972, five men were arrested during an attempt to break into Democratic National Committee headquarters (located in the Watergate office complex in Washington DC). It quickly became apparent that these men were connected to President Nixon’s re-election campaign. Despite the embarrassing headlines, Nixon won re-election in a landslide, taking 520 electoral votes and over sixty percent of the popular vote as compared to his opponent (George McGovern) who won just seventeen electoral votes and thirty-eight percent of the popular vote.

Questions about the role of the White House and of President Nixon in the break-in and in attempts to cover it up only intensified after the election. Nixon refused for as long as he could to cooperate with a series of investigations, arguing fiercely that Presidents legitimately have the power—“executive privilege”—to carry out certain important duties without the interference of the other branches. His arguments failed to persuade his supporters in Congress and in the American public. The House Judiciary Committee adopted articles of impeachment on July 27, 1974. Nixon, having been told by Republicans in Congress that he would not survive an impeachment battle, resigned a week later.

In the midst of Watergate investigations, Richard Nixon’s Vice President, Spiro Agnew, faced charges of illegal financial dealings when he was Governor of Maryland. Agnew resigned under pressure on October 10, 1973. With the post of Vice President unfilled, the Twenty-Fifth Amendment came into effect, calling for the President to fill the position with the approval of Congress.

Nixon’s presidency was in danger due to the Watergate scandal. There was a very real possibility that the person Nixon appointed to fill the office of Vice President would soon become President. Nixon conferred with Congressional leaders and was told that one person on whom almost all members of Congress could agree was Gerald Ford. One of the men present at the meeting later recalled, “We gave Nixon no choice but Ford. Congress made Jerry Ford President.”

“I Cannot Prolong the Bad Dreams”

Vice President Gerald Ford was sworn in as President of the United States on August 9, 1974, never having been elected Vice President or President. He consoled Americans with the words, “Our long national nightmare is over. Our Constitution works; our great Republic is a government of laws and not of men.” He also asked Americans, who “have not elected me as your President by your ballots, …to confirm me as your President with your prayers.” Americans did, in a way, confirm Ford as their President; after taking the oath of office, Ford enjoyed an approval rating of seventy-one percent.

Though Ford observed that “our great Republic is a government of laws,” he refused to be limited by the letter of the law in handling the ongoing effort to investigate, and possibly prosecute, the disgraced Nixon. He made the extremely unpopular decision of issuing Nixon a full pardon “for all offenses against the United States.”

In explaining his pardon, Ford stated, “there is a higher Power, by whatever name we honor Him, who ordains not only righteousness but love, not only justice but mercy.” Ford argued that justice could not be impartial in dealing with a former President. He doubted that Nixon would receive the presumption of innocence at trial. He expected that it would be impossible for Nixon to receive a speedy trial, and he feared that a trial would reopen painful old wounds. He also suspected that without issuing a pardon, the investigation and possible prosecution of Richard Nixon for obstruction of justice would make it impossible for Ford to govern. Arguing that “Richard Nixon and his loved ones have suffered enough and will continue to suffer,” Ford exercised the power entrusted to the President in Article II, Section 2 of the Constitution to “grant a full, free, and absolute pardon unto Richard Nixon….

Ford’s decision was highly controversial. Barely a third of Americans approved of the pardon at the time it was issued. Ford’s popularity rating instantly plummeted more than twenty percentage points, and ultimately fell below forty percent. By the time the 1976 campaign began, Ford was still so unpopular that his own party almost nominated another candidate. He ultimately lost the general election.

Despite the immediate unpopularity of Ford’s pardon, Americans have slowly come to see the wisdom of it. When he passed away in 2006, he was widely honored for guiding the nation through a moment of crisis, and about two-thirds of Americans now say they approve of his pardon. Though Ford did not consult public opinion in making his decision, he recalled late in life that he made the decision for the good of the country.