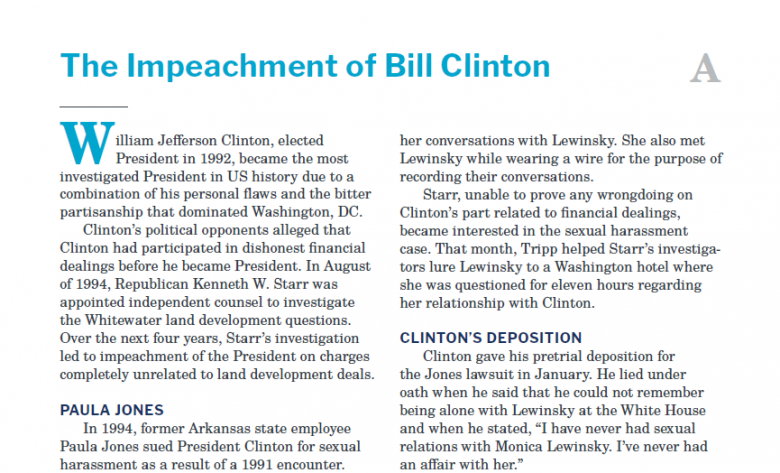 William Jefferson Clinton, elected President in 1992, became the most investigated President in US history due to a combination of his personal flaws and the bitter partisanship that dominated Washington, DC.

Clinton’s political opponents alleged that Clinton had participated in dishonest financial dealings before he became President. In August of 1994, Republican Kenneth W. Starr was appointed independent counsel to investigate the Whitewater land development questions. Over the next four years, Starr’s investigation led to impeachment of the President on charges completely unrelated to land development deals.

Tripp had befriended an unpaid intern named Monica Lewinsky. Lewinsky, then age 22, claimed that she had had a sexual affair with Clinton beginning in November, 1995. She described encounters that took place in the Oval Office. Without telling Lewinsky she was doing so, Tripp began to record their conversations in late September, 1997.

Throughout this time, Lewinsky maintained contact with the President. While she wanted to return to work in the White House, President Clinton asked an adviser to find a job for Lewinsky in New York.

Paula Jones’s lawyers, trying to establish a pattern of Clinton’s sexual misconduct, called Tripp, Lewinsky, and others to testify. In January of 1998, Lewinsky signed an affidavit in the Jones investigation, denying the affair.

At this time, Tripp gave Starr recordings of her conversations with Lewinsky. She also met Lewinsky while wearing a wire for the purpose of recording their conversations.

Starr, unable to prove any wrongdoing on Clinton’s part related to financial dealings, became interested in the sexual harassment case. That month, Tripp helped Starr’s investigators lure Lewinsky to a Washington hotel where she was questioned for eleven hours regarding her relationship with Clinton.

Clinton gave his pretrial deposition for the Jones lawsuit in January. He lied under oath when he said that he could not remember being alone with Lewinsky at the White House and when he stated, “I have never had sexual relations with Monica Lewinsky. I’ve never had an affair with her.”

Several days later, Clinton said at a press conference, “I did not have sexual relations with that woman, Ms. Lewinsky.” The denial would become one of the most infamous sound-bytes of his Presidency.

In April, the Jones lawsuit was dismissed. The judge ruled that Clinton’s conduct did not meet the legal definition necessary for a sexual harassment lawsuit. (Jones later agreed to drop her appeal in exchange for an $850,000 settlement.) Starr, however, continued his investigation into possible perjury and obstruction of justice by the President.

Starr had empaneled a grand jury. He called White House staff, Clinton’s friends and advisors, Secret Service agents, and even Lewinsky’s mother to testify. He subpoenaed records from a bookstore where Lewinsky shopped. Starr demanded and received a sample of the President’s DNA.

In July, Starr granted full immunity to Lewinsky in return for her cooperation in his investigation. She admitted that she had lied when denying her relationship with the President. She turned over to Starr a dress with a stain later determined to provide proof of sexual contact with Clinton.

In August, Clinton appeared before the same grand jury, testifying from the White House through a live closed-circuit television connection. He repeatedly refused to answer specific questions about his actions with Lewinsky.

That night, the President made a televised address to the American people. He admitted an inappropriate relationship with Lewinsky and apologized to his family and to the nation for his misleading statements about the affair.

In September 1998, Kenneth Starr delivered to the House Judiciary Committee the report of his four-year investigation which he said provided proof of eleven impeachable offences. The Starr Report was published in its entirety (accompanied by warnings about graphic content) in newspapers across the US on September 11, 1998. Clinton’s approval ratings went up throughout this time.

The House of Representatives approved two articles of impeachment, all dealing with the President’s lies regarding his relationship with Monica Lewinsky. In the trial before the Senate that began in January, 1999, House prosecutors stated that Clinton was guilty of “willful, premeditated, deliberate corruption of the nation’s system of justice through perjury and obstruction of justice.” The President’s lawyers responded, “The House Republicans’ case ends as it began, an unsubstantiated, circumstantial case that does not meet the constitutional standard to remove the President from office.”

The President’s job approval rating was over seventy percent, and informal head counts in the Senate indicated that the required two-thirds vote to convict could not be achieved. Both sides wanted to bring the impeachment proceeding to a quick end. One month later, forty-five Senators voted that the President was guilty of perjury, and fifty found him guilty of obstruction of justice. Since fewer than sixty-seven Senators found him guilty, President Clinton would continue to serve out his second term which ended in January, 2001.