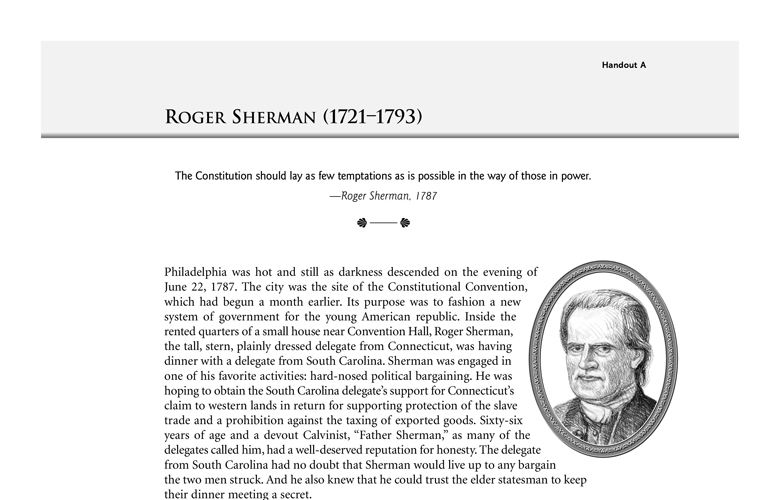 The Constitution should lay as few temptations as is possible in the way of those in power. – Roger Sherman, 1787

Philadelphia was hot and still as darkness descended on the evening of June 22, 1787. The city was the site of the Constitutional Convention, which had begun a month earlier. Its purpose was to fashion a new system of government for the young American republic. Inside the rented quarters of a small house near Convention Hall, Roger Sherman, the tall, stern, plainly dressed delegate from Connecticut, was having dinner with a delegate from South Carolina. Sherman was engaged in one of his favorite activities: hard-nosed political bargaining. He was hoping to obtain the South Carolina delegate’s support for Connecticut’s claim to western lands in return for supporting protection of the slave trade and a prohibition against the taxing of exported goods. Sixty-six years of age and a devout Calvinist, “Father Sherman,” as many of the delegates called him, had a well-deserved reputation for honesty. The delegate from South Carolina had no doubt that Sherman would live up to any bargain the two men struck. And he also knew that he could trust the elder statesman to keep their dinner meeting a secret.

Roger Sherman was born in 1721 in Newton, Massachusetts, the son of a farmer. When he was two years old, his family moved to Stoughton. There, Sherman attended the common school and learned the practice of shoemaking from his father. He spent his spare time studying theology, mathematics, history, and law. In 1743, two years after his father’s death, Sherman and his family joined his older brother in New Milford, Connecticut.

In New Milford, Sherman opened a shoemaker—or “cobbler”—shop and earned a position as the county surveyor in 1745. The income from this office enabled him to buy land and to earn a favorable reputation throughout the county. Sherman published a series of almanacs between 1750 and 1761. He also studied law on his own, passing the bar in 1754.

During the next few years, Sherman served in the General Assembly, as a justice of the peace, and as a justice of the county court. In 1761, he gave up practicing law and moved to New Haven, Connecticut. There he opened a large general store and later served as treasurer of Yale College.

During the 1760s, Sherman became a leader of American resistance to British tyranny. Ever moderate and practical, however, he initially favored peaceful forms of protest, such as boycotts and petitions. In order to devote more time to public affairs, he retired from business in 1772. Two years later, Connecticut sent him as a representative to the First Continental Congress.

Continental Congress and the Declaration of Independence

While in Philadelphia, Sherman established himself as a peer among the most respected and well-educated men of the colonies. He voiced his opinions with clarity, if without eloquence. The Continental Congress passed the Articles of Association, which established a nonimportation and nonexportation policy in the colonies. The colonies vowed to boycott goods coming from Great Britain and to refrain from delivering goods to the mother country.

In 1775, Sherman returned for the Second Continental Congress, where he served on various committees dealing with foreign trade and military supply and planning. That same year, fighting broke out between colonial and British forces, and so the issue of formally creating an independent nation soon arose. When the time came to pick a committee to draft a declaration of independence, Sherman was chosen along with John Adams, Robert Livingston, Benjamin Franklin, and Thomas Jefferson. They were known as the Committee of Five.

The committee outlined the declaration and chose Jefferson to write the actual document. Jefferson presented his draft to Sherman and the other members of the committee, who made revisions. In June 1776, the committee agreed upon a final draft, which was presented to Congress. Once the delegates approved the document, Roger Sherman signed his name to the Declaration of Independence.

Sherman kept busy in committees throughout the Second Continental Congress. The military committees were soon organized into the Board of War. Sherman’s business background qualified him to handle purchasing and distribution of supplies. He also dealt with military correspondence and served on committees that handled economic issues and Indian affairs.

In June 1776, Congress appointed Sherman to the committee that drafted a plan of union for the colonies. The Articles of Confederation were approved by Congress the next year. But concerns about representation and taxation delayed ratification of the document by the states until 1781.

While debate about the Articles of Confederation continued in the states, Sherman maintained his devotion to public service and Connecticut politics. He served in the state senate, on the Council of Safety, and as judge of the superior court. In 1783, he returned to Congress to approve the Treaty of Paris. The next year he was elected the first mayor of New Haven.

Constitution of the United States

In 1787, at the age of sixty-six, Sherman was chosen as one of Connecticut’s delegates to a convention whose purpose was to revise the Articles of Confederation. Soon after the convention began in Philadelphia, it became clear that most of the delegates wanted to create an entirely new government.

Sherman consented to the writing of a new constitution, but he was afraid of making the central government too strong. During the convention, therefore, he worked to guard the power of the states against the national government. He believed that the authority of the national government should be carefully restricted to a few areas. “All other matters civil & criminal,” Sherman proclaimed on June 6, 1787, “would be much better in the hands of the States.”

In order to protect the people’s liberty, Sherman also argued for placing the balance of the national government’s power in the legislature. He asserted that the executive was “nothing more than an institution for carrying the will of the Legislature into effect.” To this end, Sherman proposed that the president be chosen by Congress and serve at its pleasure.

Sherman spoke at least one hundred thirty-eight times during the convention on a variety of subjects. He consistently argued for the careful limiting of government power. He also proposed the Great Compromise, which decided the method of representation in the Congress. By this agreement, the Congress would be divided into two houses. In the Senate, each state would have an equal vote. In the House of Representatives, each state would be represented according to its population. The Great Compromise settled the most difficult issue dividing the large and small states.

Sherman opposed listing the people’s rights in the Constitution. He feared that such a bill of rights would give the federal government the authority to intervene in state affairs. Also, any such list would surely omit certain rights held by the people. This could be used by tyrants to take away the people’s rights.

Ratification and the First Congress

In 1789, Sherman took a seat in the new House of Representatives. In the first Congress, he supported James Madison’s effort to add a bill of rights to the Constitution. Ever flexible, Sherman had changed his mind on this issue. He came to favor a bill of rights because the people of Connecticut supported one. In 1791, the seventy-year-old Sherman was appointed to the United States Senate, where he served until his death in July 1793.