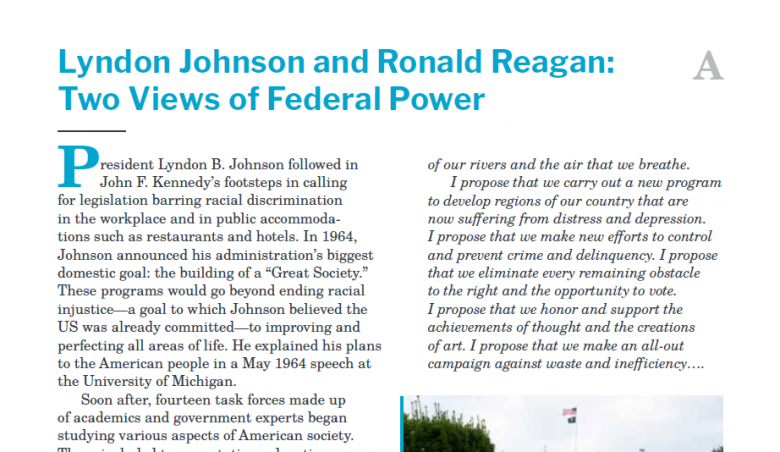 Directions: Read the essay and answer the Comprehension and Critical Thinking Questions

President Lyndon B. Johnson followed in John F. Kennedy’s footsteps in calling for legislation barring racial discrimination in the workplace and in public accommodations such as restaurants and hotels. In 1964, Johnson announced his administration’s biggest domestic goal: the building of a “Great Society.” These programs would go beyond ending racial injustice—a goal to which Johnson believed the US was already committed—to improving and perfecting all areas of life. He explained his plans to the American people in a May 1964 speech at the University of Michigan.

Soon after, fourteen task forces made up of academics and government experts began studying various aspects of American society. These included transportation, education, preservation of natural beauty, and civil rights. Every task force worked directly for the President. Their findings and recommendations were shared among government officials.

Johnson was elected President in 1964, carrying all but six states, with 61 percent of the popular vote. In his State of the Union Address the following January, Johnson noted that in a time of great prosperity, it was time to “turn increased attention to the character of American life.”

Johnson outlined some of the measures he recommended to Congress:

The President has no power to make law; he can only propose laws to Congress. Johnson submitted eighty-seven bills to Congress. Congress passed eighty-four, and Johnson signed them into law. Great Society programs included Medicare and Medicaid, which provide health care to the elderly and the disadvantaged, and Head Start, which provides preschool and other educational services for poor families.

Critics of Lyndon Johnson charged that he had tried to convince Americans that government could create a utopia—a perfect world. They criticized the goals of his programs as outside the ability of government to achieve. Further, they charged that some of the legislation he had asked for and signed into law was outside the constitutional powers of Congress to enact.

About fifteen years later, the prosperity that had marked Johnson’s time was over and the economy was in a deep recession. Inflation was approaching twelve percent, and more than ten percent of Americans were out of work. Presidential candidate Ronald Reagan ran a campaign based on the promises of lower taxes, a strong national defense, and less government involvement in individuals’ lives.

Reagan was elected President in 1980, carrying forty-four states. In his First Inaugural Address, he stressed the importance of persevering and the power of individuals to control their own destinies. Government, he said, was not the solution to the problem, government was the problem. He asked, “If no one among us is capable of governing himself, then who among us has the capacity to govern someone else?”

Throughout his Presidency, Reagan worked to decrease the size of the federal government, and advocated policies and reforms that he believed empowered individuals. He called for a thirty percent tax cut over three years. Congress passed a twenty-five percent cut, which Reagan signed into law. In eight years as President, he signed a total of nine tax bills providing across the board tax cuts.

Reagan also worked to dramatically cut federal spending on domestic programs, because of his concerns about the constitutionality of these programs. He called for $41.4 billion in budget cuts, mostly from Great Society programs. While not touching Medicare and Social Security, Reagan approved cuts in federal education programs, food stamp programs, workplace programs, and other non-military domestic programs.

Believing the US had neglected the military after the Vietnam War, and as the Cold War continued, Reagan asked for increased funds to strengthen the armed forces. By the time he left office, military spending was approximately forty percent greater than at the height of the Vietnam War.

The decrease in taxes and increase in military spending resulted in the biggest budget deficits in the country’s history to that time. The deficits continued each year, but Reagan vowed to veto any tax increases Congress passed.

Unemployment peaked at 10.8 percent in December 1982, higher than any time since the Great Depression, and then steadily went down through the rest of Reagan’s time in office. Sixteen million new jobs were created, and inflation decreased significantly. By the mid 1980s, the economy was booming again.

In 1988, Ronald Reagan, referring to Johnson’s initiatives, declared that the US had fought a war on poverty but that poverty had won. Today, historians and economists debate the constitutionality as well as the outcomes of both presidents’ policies. Some charge that many of Johnson’s programs, while well-intended, have not achieved their goals and should be discontinued. Reagan’s critics assert that his tax plan unfairly benefited the wealthy, and blamed “trickle-down economics” for producing large deficits that deepened the national debt.