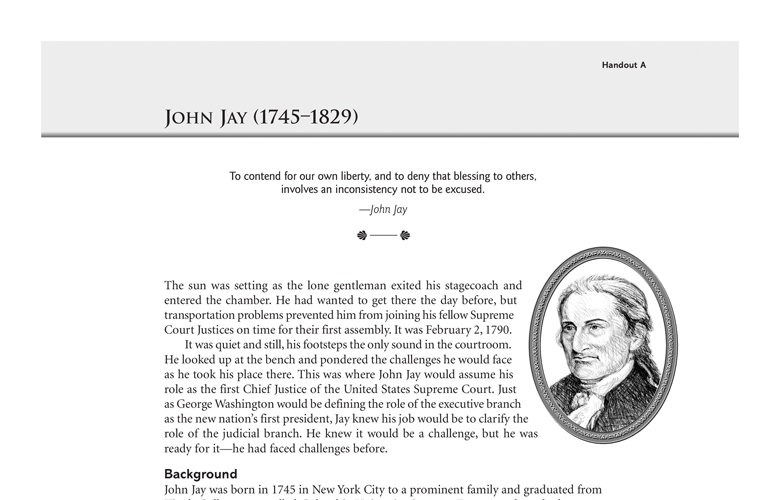 To contend for our own liberty, and to deny that blessing to others, involves an inconsistency not to be excused. – John Jay

The sun was setting as the lone gentleman exited his stagecoach and entered the chamber. He had wanted to get there the day before, but transportation problems prevented him from joining his fellow Supreme Court Justices on time for their first assembly. It was February 2, 1790.

It was quiet and still, his footsteps the only sound in the courtroom. He looked up at the bench and pondered the challenges he would face as he took his place there. This was where John Jay would assume his role as the first Chief Justice of the United States Supreme Court. Just as George Washington would be defining the role of the executive branch as the new nation’s first president, Jay knew his job would be to clarify the role of the judicial branch. He knew it would be a challenge, but he was ready for it—he had faced challenges before.

John Jay was born in 1745 in New York City to a prominent family and graduated from King’s College, now called Columbia University, in 1764. Four years later, he began to practice law. Through his work, Jay gained notoriety throughout New York. Britain’s aggressive response to the Boston Tea Party convinced Jay to support the Patriots’ efforts against taxation without representation. He became well known in the patriotic circles of New York. As a result, Jay was elected to serve in the First Continental Congress. He soon wrote the Address to the People of Great Britain. In the Address, he argued that the American colonists deserved the same rights and privileges that British subjects received in England. He defended many rights that would later be guaranteed in the Bill of Rights— property, jury trial, due process, and religion.

Although Jay opposed many British policies, he did not support independence from Great Britain in 1774. Like many of his time, he favored a more moderate approach. He passionately opposed Parliament’s actions toward the colonies. However, he hoped the colonies could restore their relationship with Britain.

At the Second Continental Congress in 1775, he encouraged a moderate approach to Britain. The majority of the delegates insisted on independence instead. Jay resigned from Congress rather than sign the Declaration of Independence. But he joined his fellow Patriots once the rest of the colonists rallied behind the action.

Like many Congressmen, Jay returned to state matters in 1777. He drafted the New York constitution and served as Chief Justice of New York. New Yorkers selected Jay as a delegate to the Continental Congress in 1778. His fellow delegates elected him to serve as President of the Assembly, the highest office in the nation under the Articles of Confederation.

The Diplomat and Chief Justice

Following his one-year term as president of the Assembly, Congress sent Jay on a series of diplomatic missions. He visited Spain to gain financial aid and official recognition of the new nation, but his efforts failed. He then set off to join Benjamin Franklin and John Adams in Paris to successfully establish a peace treaty with Great Britain.

Jay returned to the United States of America in 1784. While he was away, Congress appointed him the secretary of foreign affairs. He found the job difficult to execute under the Articles of the Confederation, though, because each state was free to act alone. He had no power to make meaningful treaties with other nations. The experience strengthened his resolve for a centralized federal government. Consequently, he wrote five of The Federalist Papers to encourage ratification of the new Constitution. Upon ratification of the new Constitution in 1789, George Washington appointed Jay Chief Justice of the first Supreme Court. Jay accepted the position and began clarifying the role of the judiciary in the new government.

In 1794, George Washington asked Jay to take a leave of absence from the Court. The British recently had seized American trading ships in the French West Indies, a large source of trade revenue and goods for the United States. The end of trade in the region could have crippled America’s fragile economy. Washington hoped to avoid economic destruction by striking an agreement with the British. He sent Jay to do the job.

Jay’s Treaty, as it would be called, was signed in June 1794. A number of treaty provisions favored the United States, but some Americans believed the British had gained an economic advantage. Reaction to the treaty was so hostile that Jay was burned in effigy in some cities. The United States secured equal access to Great Britain and the East Indies, but received harsh restrictions on trade in the British West Indies. In contrast, the treaty granted Britain the status of most favored nation in trade at American ports.

In addition, Jay failed to secure compensation for slaves taken by the British, or protection from imprisonment for American sailors. Southern slave-owners believed that Jay, an abolitionist, did not support compensation. They accused Jay of intentionally compromising on the issue. Many Americans claimed Jay had given the British everything they wanted and had weakened American power as a result. While the treaty received a negative reception in the United States, it accomplished the United States’s goal of avoiding war with Britain.

Upon returning to the United States from England in 1795, John Jay learned he had been elected governor of New York. He never requested or agreed to the job. Nevertheless, he permanently resigned from the Supreme Court and took on the position. As governor, Jay fought for the emancipation of slaves. Throughout his years of public service, Jay had battled against slavery. In 1785, he created the New York Manumission Society. The Society organized anti-slavery actions, such as lawsuits and boycotts. As a result of consistent efforts, Jay signed an emancipation bill passed by the New York legislature in 1799.

The next year, John Adams requested that Jay return to his role of Chief Justice, but the retired governor refused. Jay had grown disillusioned with the court system, especially with judges serving on lower courts. He decided not to participate until the system was reformed. Instead, he spent his remaining days on his farm in Westchester until his death in 1829.