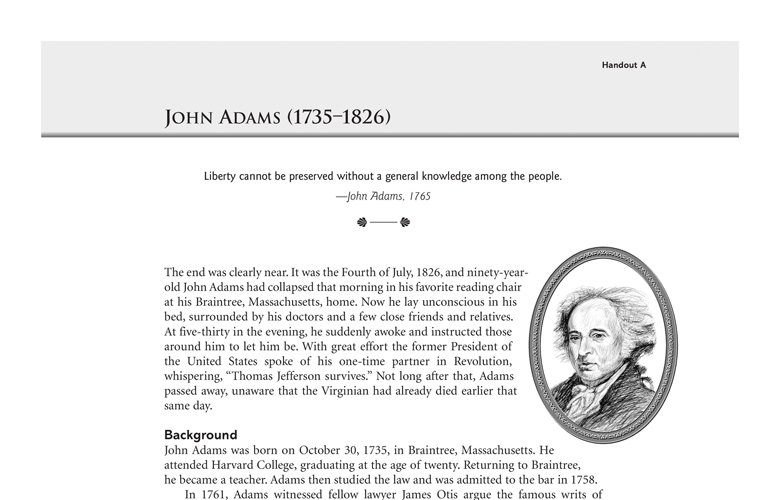 Liberty cannot be preserved without a general knowledge among the people. —John Adams, 1765

The end was clearly near. It was the Fourth of July, 1826, and ninety-year old John Adams had collapsed that morning in his favorite reading chair at his Braintree, Massachusetts, home. Now he lay unconscious in his bed, surrounded by his doctors and a few close friends and relatives. At five-thirty in the evening, he suddenly awoke and instructed those around him to let him be. With great effort the former President of the United States spoke of his one-time partner in Revolution, whispering, “Thomas Jefferson survives.” Not long after that, Adams passed away, unaware that the Virginian had already died earlier that same day.

John Adams was born on October 30, 1735, in Braintree, Massachusetts. He attended Harvard College, graduating at the age of twenty. Returning to Braintree, he became a teacher. Adams then studied the law and was admitted to the bar in 1758.

In 1761, Adams witnessed fellow lawyer James Otis argue the famous writs of assistance case in a Boston courtroom. In this case, Otis challenged the legality of search warrants that gave British customs officials broad authority to inspect American ships, warehouses, and private homes. Though Otis lost the case, Adams was inspired by his arguments, which used natural law to defend American rights.

Dissertation on the Canon and Feudal Law

Fired by Otis’s speech, Adams became a defender of American liberty. In 1765 he began writing a series of essays, A Dissertation on the Canon and Feudal Law. When British Parliament passed the Stamp Act that same year, Adams concluded the Dissertation with an attack on this hated law. Adams called for Americans to stand fast in defense of their rights.

Parliament repealed the Stamp Act in 1766, and anti-British sentiment died down in the colonies. That same year Adams moved to Boston, where he continued to practice law. On March 5, 1770, a group of British soldiers fired on a mob of Bostonians who had been taunting the soldiers and pelting them with snowballs and various objects. Five citizens were shot and killed.

Nine soldiers were arrested and tried in Boston, and Adams agreed to act as their lawyer. Though he detested the presence of British troops in Boston, Adams also deplored mob violence. “Facts are stubborn things,” Adams said to the jury in the case. “Whatever may be our wishes . . . they cannot alter the state of facts and evidence.” The jury found seven of the soldiers not guilty, and found two guilty of a lesser charge of manslaughter. These men were branded on the thumb and let go.

Adams’s popularity among his fellow Bostonians suffered for a time as a result of his defense of the soldiers. Still, he was elected to the Massachusetts legislature in 1770 and served in the First Continental Congress in 1774. Adams played a leading role in Congress, serving on ninety committees and chairing twenty-five of these.

Adams was an early advocate of independence from Great Britain. In 1776 he penned his Thoughts on Government. In this essay, Adams described how an independent American government should be arranged. That summer he headed the committee charged with writing the Declaration of Independence. Congress then appointed Adams minister to France.

Adams returned home in 1779. The next year, he drafted a new constitution for Massachusetts. Included in the document was a declaration of rights, which declared that all men were “born free and equal” with certain “natural, essential, and unalienable rights.” Among those rights were “freedom of deliberation, speech, and debate” and “liberty of the press.” The declaration also guaranteed the right to trial by jury, prohibitions against unreasonable searches and seizures, and expanded religious freedom in the state.

The Constitution and Bill of Rights

In 1780, Adams accepted another diplomatic assignment from Congress and returned to Europe. He served on the commission that negotiated the Treaty of Paris, which ended the Revolutionary War. He then served as American minister to London from 1783–1788.

While in London, Adams followed the events at the Constitutional Convention taking place in Philadelphia in the summer of 1787. He corresponded with his friend, Thomas Jefferson, who was serving in Paris. Both urged Congress to yield to the Anti-Federalist demand for a bill of rights as a condition for ratifying the proposed Constitution.

President of the United States

The Constitution was ratified in 1789. Adams was elected the first Vice President of the United States, serving under George Washington from 1789 to 1797. In 1796, Adams was elected President. During the 1790s, the first American party system developed. Adams sided in spirit with the Federalists against the Democratic-Republicans (or simply, Republicans), headed by Jefferson.

Early in Adams’s term, the United States entered a “quasi-war” (or undeclared war) with France. Much of Europe was at war with France at this time. Adams, who saw war as a last resort, was facing a dilemma. Many within his party wanted a declaration of war. Many within the Republican Party, though, had publicly stated their sympathy for the French Revolutionaries and accused Adams of being a monarchist.

In response to this crisis, the Federalist-controlled Congress passed a series of laws known as the Alien and Sedition Acts in 1798. These laws gave the government the authority to deport aliens and to lengthen the period of naturalization for immigrants. (Immigrants tended to become Republicans). Though John Adams signed these laws, he never asked for or personally used them. Adams, much later, explained that he saw the Alien Acts as war measures. “I knew there was need of them both, and I consented to them.”

The Sedition Act, more controversially, limited freedom of the press and permitted authorities to jail citizens who criticized the government. (Again, those who were jailed were all Republicans.) This law arguably violated the First Amendment, but the Federalists insisted it was a war measure. Several Republican newspaper editors were arrested under the Sedition Act.

Jefferson defeated Adams for the presidency in the election of 1800. The Republican controlled Congress repealed the Naturalization Act and allowed the other laws to expire between 1800 and 1802.

By this time, political disagreements between Adams and Jefferson had declined into personal animosity. The one-time collaborators would not communicate with each other for twelve years. Near the end of their lives, though, Adams and Jefferson reconciled. Adams assured Jefferson that “while I breathe I shall be your friend.” The end for both men came on July 4, 1826, the fiftieth anniversary of the adoption of the Declaration of Independence.