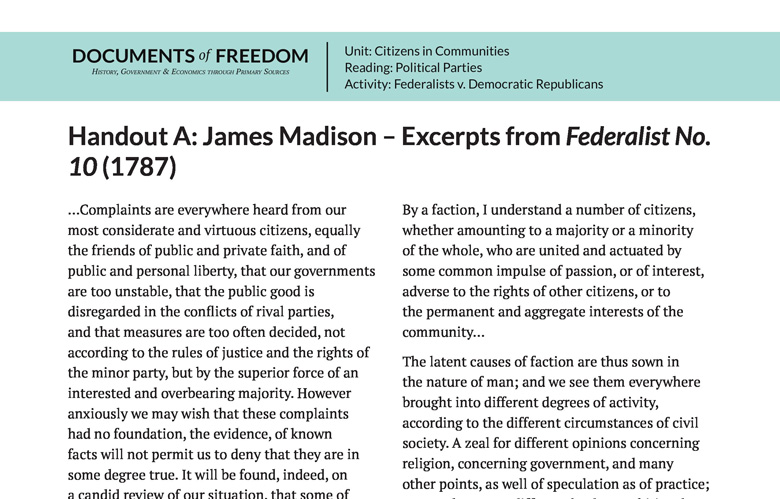 …Complaints are everywhere heard from our most considerate and virtuous citizens, equally the friends of public and private faith, and of public and personal liberty, that our governments are too unstable, that the public good is disregarded in the conflicts of rival parties, and that measures are too often decided, not according to the rules of justice and the rights of the minor party, but by the superior force of an interested and overbearing majority. However anxiously we may wish that these complaints had no foundation, the evidence, of known facts will not permit us to deny that they are in some degree true. It will be found, indeed, on a candid review of our situation, that some of the distresses under which we labor have been erroneously charged on the operation of our governments; but it will be found, at the same time, that other causes will not alone account for many of our heaviest misfortunes; and, particularly, for that prevailing and increasing distrust of public engagements, and alarm for private rights, which are echoed from one end of the continent to the other. These must be chiefly, if not wholly, effects of the unsteadiness and injustice with which a factious spirit has tainted our public administrations.

By a faction, I understand a number of citizens, whether amounting to a majority or a minority of the whole, who are united and actuated by some common impulse of passion, or of interest, adverse to the rights of other citizens, or to the permanent and aggregate interests of the community…

The latent causes of faction are thus sown in the nature of man; and we see them everywhere brought into different degrees of activity, according to the different circumstances of civil society. A zeal for different opinions concerning religion, concerning government, and many other points, as well of speculation as of practice; an attachment to different leaders ambitiously contending for pre-eminence and power; or to persons of other descriptions whose fortunes have been interesting to the human passions, have, in turn, divided mankind into parties, inflamed them with mutual animosity, and rendered them much more disposed to vex and oppress each other than to co-operate for their common good. So strong is this propensity of mankind to fall into mutual animosities, that where no substantial occasion presents itself, the most frivolous and fanciful distinctions have been sufficient to kindle their unfriendly passions and excite their most violent conflicts.