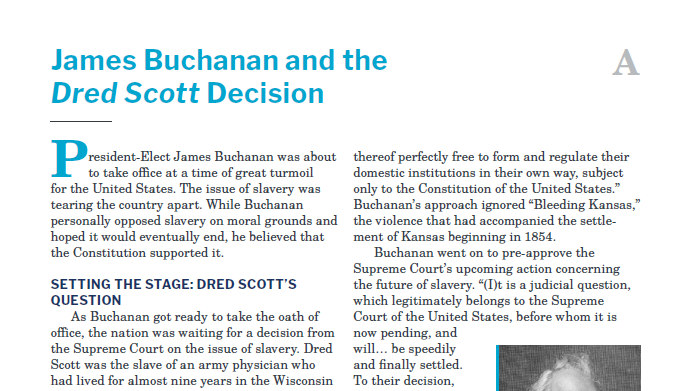 President-Elect James Buchanan was about to take office at a time of great turmoil for the United States. The issue of slavery was tearing the country apart. While Buchanan personally opposed slavery on moral grounds and hoped it would eventually end, he believed that the Constitution supported it.

As Buchanan got ready to take the oath of office, the nation was waiting for a decision from the Supreme Court on the issue of slavery. Dred Scott was the slave of an army physician who had lived for almost nine years in the Wisconsin Territory (now Minnesota), where the Missouri Compromise had outlawed slavery. Upon returning to Missouri, Scott sued for his freedom on the grounds that he had once lived in a free territory. His case eventually made its way to the US Supreme Court. This decision would affect not only Scott and his family, but also the larger question of whether Congress could regulate the spread of slavery.

Buchanan secretly consulted with Supreme Court Justice James Grier and learned that the Supreme Court was going to hand down a pro-Southern decision. Buchanan hoped to put to rest forever the controversy regarding the spread of slavery.

In his Inaugural Address, Buchanan endorsed the principle known as “popular sovereignty.” Voters in a territory would hold an election to determine whether slavery could exist in that territory. Referring to the Kansas-Nebraska Act of 1854, he said, “…this simple rule, that the will of the majority shall govern, [should settle] the question of domestic slavery in the Territories. Congress is … to leave the people thereof perfectly free to form and regulate their domestic institutions in their own way, subject only to the Constitution of the United States.” Buchanan’s approach ignored “Bleeding Kansas,” the violence that had accompanied the settlement of Kansas beginning in 1854.

Buchanan went on to pre-approve the Supreme Court’s upcoming action concerning the future of slavery. “(I)t is a judicial question, which legitimately belongs to the Supreme Court of the United States, before whom it is now pending, and will… be speedily and finally settled. To their decision, in common with all good citizens, I shall cheerfully submit, whatever this may be… all agree that under the Constitution slavery in the states is beyond the reach of any human power except that of the respective states themselves wherein it exists. May we not, then, hope that the long agitation on this subject is approaching its end…?”

Buchanan pretended not to know what the Court’s decision would be, and made it clear that everyone should accept the Court’s interpretation of this constitutional issue as the final answer. Buchanan hoped and believed that, since all three branches of the federal government agreed that the Constitution protected the spread of slavery, the divisive issue would be resolved and slavery would spread –or not—according to the wishes of the voters in their respective states.

Two days later, the Supreme Court announced a 7-2 ruling against Dred Scott. The Court ruled that Congress had no power to prohibit slavery in the territories and that the Missouri Compromise had been unconstitutional. Moreover, neither Scott nor any black person had any legal rights because blacks were not considered part of the political community when the Constitution was ratified. Slaves were property, and slave owners could not be deprived of their property without due process.

Justice Benjamin Curtis wrote a lengthy dissent. He pointed out that in 1787, free blacks voted in several states, including Massachusetts, New Hampshire, and New York. Therefore, according to Curtis, they were part of the political community and had always been citizens. Furthermore, Curtis supported the constitutionality of the Missouri Compromise because it had been accepted as law for more than three decades.

The Court’s majority opinion supported the idea that there could be “property” in people, as opposed to supporting the rights of enslaved individuals. Far from settling the question of the spread of slavery, the Court’s answer demonstrated that a political solution to the problem was impossible and helped set the stage for the Civil War.

Expansion of slavery became the dominant issue of Buchanan’s presidency. Throughout his term, he maintained that the Constitution protected the right of slaveowners to their property. In his last annual address to Congress on December 3, 1860, after the election of Abraham Lincoln, Buchanan blamed the crisis of disunion on the “long continued and intemperate interference of the Northern people with the question of slavery.”

Buchanan stated that Southern grievances regarding slavery were legitimate. He thought secession was illegal, but believed the President lacked the power under the Constitution to stop it. He denied that the federal government could legitimately force any state to remain in the Union. Repeating a point from his Inaugural Address, he explained that the only thing necessary to preserve the Union was for the slave states “to be let alone and permitted to manage their domestic institutions in their own way.” Buchanan even called for a constitutional amendment specifically recognizing the right of “property” in slaves.

President Buchanan’s hope that the nation would accept the Dred Scott ruling as a final settlement was misguided. And his understanding of the protection of slavery in the Constitution, while consistent with that of the majority both in Congress and in the Supreme Court, was inconsistent with the nation’s highest principles.