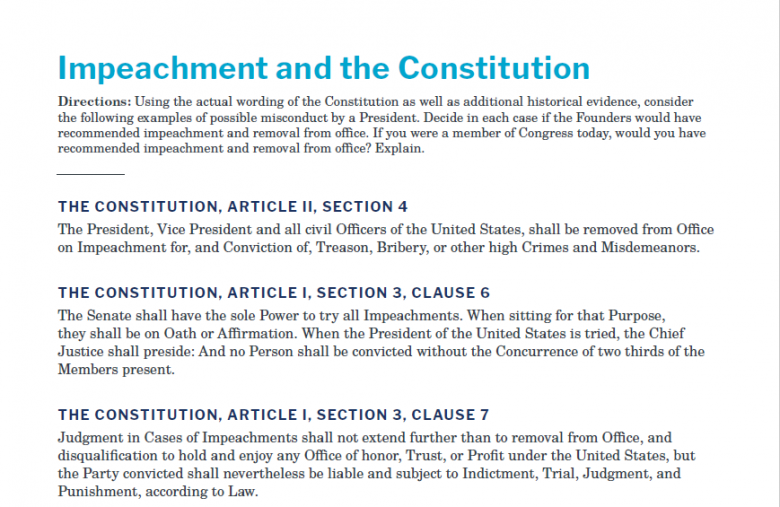 Impeachment and the Constitution

The President, Vice President and all civil Officers of the United States, shall be removed from Office on Impeachment for, and Conviction of, Treason, Bribery, or other high Crimes and Misdemeanors.

THE CONSTITUTION, ARTICLE I, SECTION 3, CLAUSE 6

The Senate shall have the sole Power to try all Impeachments. When sitting for that Purpose, they shall be on Oath or Affirmation. When the President of the United States is tried, the Chief Justice shall preside: And no Person shall be convicted without the Concurrence of two thirds of the Members present.

THE CONSTITUTION, ARTICLE I, SECTION 3, CLAUSE 7

Judgment in Cases of Impeachments shall not extend further than to removal from Office, and disqualification to hold and enjoy any Office of honor, Trust, or Profit under the United States, but the Party convicted shall nevertheless be liable and subject to Indictment, Trial, Judgment, and Punishment, according to Law.

THE FOUNDERS AND IMPEACHMENT

The specific wording of the infractions for which a President could be impeached was a matter of discussion throughout the Constitutional Convention. The Founders considered the following phrases:

Alexander Hamilton addressed the issue of impeachment in Federalist No. 65, and stated that Presidents could be impeached for: