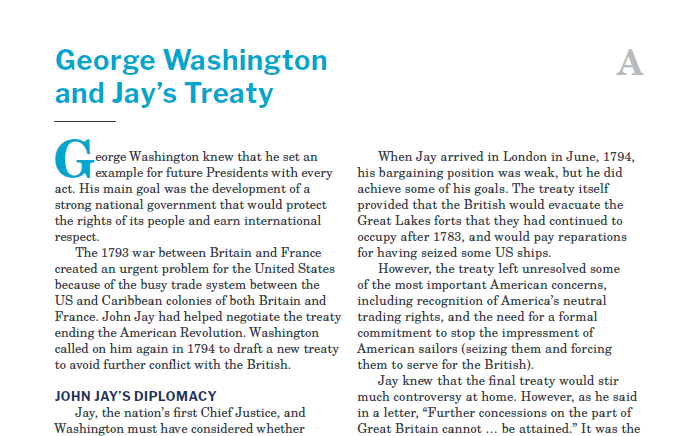 George Washington knew that he set an example for future Presidents with every act. His main goal was the development of a strong national government that would protect the rights of its people and earn international respect.

The 1793 war between Britain and France created an urgent problem for the United States because of the busy trade system between the US and Caribbean colonies of both Britain and France. John Jay had helped negotiate the treaty ending the American Revolution. Washington called on him again in 1794 to draft a new treaty to avoid further conflict with the British.

Jay, the nation’s first Chief Justice, and Washington must have considered whether it was constitutional for Jay to accept the diplomatic position. While the Constitution prohibits members of Congress from accepting other federal offices, it includes no such prohibition on Justices of the Supreme Court. Jay accepted the post and Washington immediately asked the Senate to confirm the appointment. Some Senators thought such a foreign appointment was unwise because it would harm the Constitution’s principle of separation of powers if judges thought they could gain high-paid positions dependent on the executive branch. However, after two days of debate, the Senate approved Washington’s choice.

Soon after, another constitutional question arose. Jay met with Secretary of the Treasury Alexander Hamilton and several Senators to define the goals of Jay’s mission. They discussed whether “advice and consent of the Senate” meant that the President needed to submit the specific details of Jay’s instructions to the Senate. They all agreed that such pre-clearance was unnecessary.

When Jay arrived in London in June, 1794, his bargaining position was weak, but he did achieve some of his goals. The treaty itself provided that the British would evacuate the Great Lakes forts that they had continued to occupy after 1783, and would pay reparations for having seized some US ships.

However, the treaty left unresolved some of the most important American concerns, including recognition of America’s neutral trading rights, and the need for a formal commitment to stop the impressment of American sailors (seizing them and forcing them to serve for the British).

Jay knew that the final treaty would stir much controversy at home. However, as he said in a letter, “Further concessions on the part of Great Britain cannot … be attained.” It was the best he could do.

Controversy Regarding the Treaty

Washington required the Senate to debate the treaty in secret. Republican newspapers attacked such secrecy, maintaining that it contradicted representative government. However, the Senate ratified the treaty, with the exception of one article in 1795. Soon newspapers published the entire treaty, and public protest against it swept the country for the next six weeks. Jay commented that he could have traveled across the whole country by the light of his burning effigies.

In July 1795, Washington explained his reasoning in his Letter to the Boston Citizens, “Without a predilection [preference] for my own judgment, I have weighed with attention every argument, which has at any time been brought into view. But the Constitution is the guide, which I never will abandon. It has assigned to the President the power of making treaties, with the advice and consent of the senate. It was doubtless supposed that these two branches of government would combine, without passion, (and with the best means of information), those facts and principles upon which the success of our foreign relations will always depend: that they ought not to substitute for their own conviction the opinions of others; or to scorn expect truth thro’ any channel but that of a temperate and well-informed investigation.”

In mid-August 1795, Washington signed Jay’s Treaty. He reasoned that it was the best he could get, and that rejection would make it appear that the US favored France—Britain’s enemy.

Since Congress has the power of the purse, costs as a result of the Treaty would have to be approved by the House of Representatives. Treaty opponents in the House demanded that Washington produce all papers relevant to the Treaty, but he refused since treaty approval belonged solely to the Senate. He thereby set an important precedent of executive privilege (though the term was not used at the time). The House finally voted in 1796 to fund the Treaty.

The Legacy of Jay’s Treaty

While Jay’s Treaty did not accomplish some of its important objectives, many of its results were noteworthy. Its most important goal of avoiding war with Britain was met at a time when the US probably could not have won. It provided a way to settle the boundary disputes and evacuate British troops from the Great Lakes forts, encouraging westward movement and an economic boom.