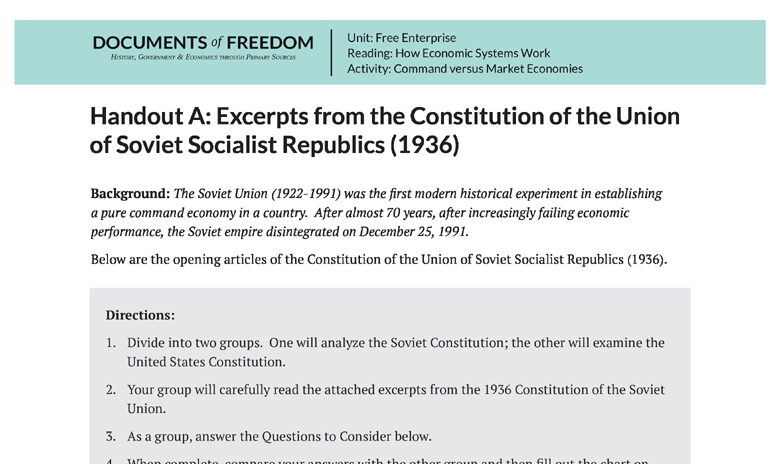 Handout A: Excerpts from the Constitution of the Union of Soviet Socialist Republics (1936)

Background: The Soviet Union (1922-1991) was the first modern historical experiment in establishing a pure command economy in a country. After almost 70 years, after increasingly failing economic performance, the Soviet empire disintegrated on December 25, 1991.

Below are the opening articles of the Constitution of the Union of Soviet Socialist Republics (1936).

When reading these constitutional articles, consider the following:

ARTICLE 1. The Union of Soviet Socialist Republics is a socialist state of workers and peasants.1

ARTICLE 6. The land, its natural deposits, waters, forests, mills, factories, mines, rail, water and air transport, banks, post, telegraph and telephones, large state-organized agricultural enterprises…as well as municipal enterprises and the bulk of the dwelling houses in the cities and industrial localities, are state property, that is, belong to the whole people.4

ARTICLE 9. Alongside the socialist system of economy, which is the predominant form of economy in the U.S.S.R., the law permits the small private economy of individual peasants and handicraftsman based on their personal labor and precluding the exploitation of the labor of others.6

ARTICLE 10. The right of citizens to personal ownership of their incomes from work and of their savings, of their dwelling houses and subsidiary household economy, their household furniture and utensils and articles of personal use and convenience, as well as the right of inheritance of personal property of citizens, is protected by law.7

ARTICLE 11. The economic life of the U.S.S.R. is determined and directed by the state national economic plan with the aim of increasing the public wealth, of steadily improving the material conditions of the working people and raising their cultural level, of consolidating the independence of the U.S.S.R. and strengthening its defensive capacity.8

1Note that there is no role for professionals or entrepreneurs.

2Capitalism is abolished. Private ownership of the means of production (capital) is ended.

3Property belongs to the state or to cooperatives/collectives.

4Almost all property belongs to the state, rather than individuals.

5In a collective or cooperative, nearly all property belongs to the collective. Workers may have a small piece of land to work for themselves.

6Peasants and workers may have a “small private economy” provided it is based on their own handiwork.

7What workers earn is their property. They may also own some minor personal articles. This is protected by law.

8The state controls economic activity through its central economic plan. The purpose of the economy is improving the material conditions of working and in strengthening the state.

9Work is a duty, not a choice.