Being an American: An American Primer

The Executive Branch: Readings and Dialogues on the Office and the People 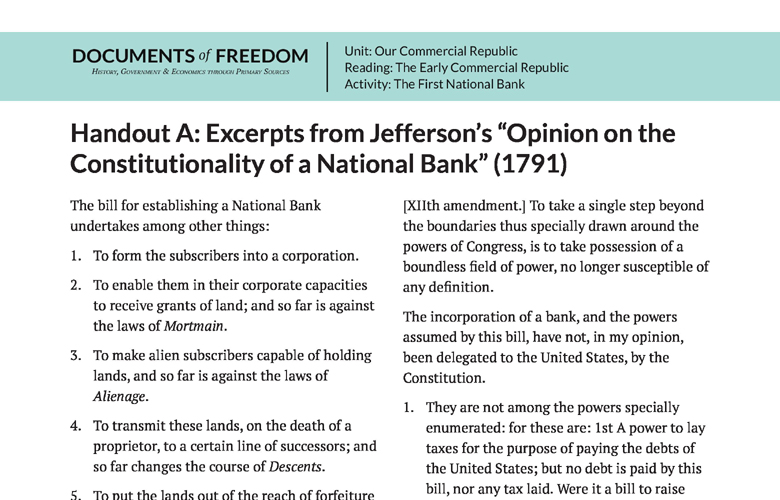 Handout A: Excerpts from Jefferson’s “Opinion on the Constitutionality of a National Bank” (1791)

The bill for establishing a National Bank undertakes among other things:

1. To form the subscribers into a corporation.

2. To enable them in their corporate capacities to receive grants of land; and so far is against the laws of Mortmain.

3. To make alien subscribers capable of holding lands, and so far is against the laws of Alienage.

4. To transmit these lands, on the death of a proprietor, to a certain line of successors; and so far changes the course of Descents.

5. To put the lands out of the reach of forfeiture or escheat, and so far is against the laws of Forfeiture and Escheat.

6. To transmit personal chattels to successors in a certain line and so far is against the laws of Distribution.

7. To give them the sole and exclusive right of banking under the national authority; and so far is against the laws of Monopoly.

8. To communicate to them a power to make laws paramount to the laws of the States; for so they must be construed, to protect the institution from the control of the State legislatures, and so, probably, they will be construed.

I consider the foundation of the Constitution as laid on this ground: That “all powers not delegated to the United States, by the Constitution, nor prohibited by it to the States, are reserved to the States or to the people.” [XIIth amendment.] To take a single step beyond the boundaries thus specially drawn around the powers of Congress, is to take possession of a boundless field of power, no longer susceptible of any definition.

The incorporation of a bank, and the powers assumed by this bill, have not, in my opinion, been delegated to the United States, by the Constitution.

1. They are not among the powers specially enumerated: for these are: 1st A power to lay taxes for the purpose of paying the debts of the United States; but no debt is paid by this bill, nor any tax laid. Were it a bill to raise money, its origination in the Senate would condemn it by the Constitution.

2. “To borrow money.” But this bill neither borrows money nor ensures the borrowing it. The proprietors of the bank will be just as free as any other money holders, to lend or not to lend their money to the public. The operation proposed in the bill first, to lend them two millions, and then to borrow them back again, cannot change the nature of the latter act, which will still be a payment, and not a loan, call it by what name you please.

3. To “regulate commerce with foreign nations, and among the States, and with the Indian tribes.” To erect a bank, and to regulate commerce, are very different acts. He who erects a bank, creates a subject of commerce in its bills, so does he who makes a bushel of wheat, or digs a dollar out of the mines; yet neither of these persons regulates commerce thereby. To make a thing which may be bought and sold, is not to prescribe regulations for buying and selling. Besides, if this was an exercise of the power of regulating commerce, it would be void, as extending as much to the internal commerce of every State, as to its external. For the power given to Congress by the Constitution does not extend to the internal regulation of the commerce of a State, (that is to say of the commerce between citizen and citizen,) which remain exclusively with its own legislature; but to its external commerce only, that is to say, its commerce with another State, or with foreign nations, or with the Indian tribes. Accordingly the bill does not propose the measure as a regulation of trace, but as “productive of considerable advantages to trade.” Still less are these powers covered by any other of the special enumerations.

II. Nor are they within either of the general phrases, which are the two following:

2. The second general phrase is, “to make all laws necessary and proper for carrying into execution the enumerated powers.” But they can all be carried into execution without a bank. A bank therefore is not necessary, and consequently not authorized by this phrase.

…The Constitution allows only the means which are “necessary,” not those which are merely “convenient” for effecting the enumerated powers. If such a latitude of construction be allowed to this phrase as to give any non-enumerated power, it will go to everyone, for there is not one which ingenuity may not torture into a convenience in some instance or other, to some one of so long a list of enumerated powers. It would swallow up all the delegated powers, and reduce the whole to one power, as before observed. Therefore it was that the Constitution restrained them to the necessary means, that is to say, to those means without which the grant of power would be nugatory.

…Every State will have to pay a sum of tax money into the treasury; and the treasury will have to pay, in every State, a part of the interest on the public debt, and salaries to the officers of government resident in that State. In most of the States there will still be a surplus of tax money to come up to the seat of government for the officers residing there. The payments of interest and salary in each State may he made by treasury orders on the State collector. This will take up the greater part of the money he has collected in his State, and consequently prevent the great mass of it from being drawn out of the State. If there be a balance of commerce in favor of that State against the one in which the government resides, the surplus of taxes will be remitted by the bills of exchange drawn for that commercial balance. And so it must be if there was a bank. But if there be no balance of commerce, either direct or circuitous, all the banks in the world could not bring up the surplus of taxes, but in the form of money. Treasury orders then, and bills of exchange may prevent the displacement of the main mass of the money collected, without the aid of any bank; and where these fail, it cannot be prevented even with that aid.

Perhaps, indeed, bank bills may be a more convenient vehicle than treasury orders. But a little difference in the degree of convenience cannot constitute the necessity which the Constitution makes the ground for assuming any non-enumerated power.

Besides, the existing banks will, without a doubt, enter into arrangements for lending their agency, and the more favorable, as there will be a competition among them for it; whereas the bill delivers us up bound to the national bank, who are free to refuse all arrangement, but on their own terms, and the public not free, on such refusal, to employ any other bank…

Can it be thought that the Constitution intended that for a shade or two of convenience, more or less, Congress should be authorized to break down the most ancient and fundamental laws of the several States; such as those against Mortmain, the laws of Alienage, the rules of descent, the acts of distribution, the laws of escheat and forfeiture, the laws of monopoly? Nothing but a necessity invincible by any other means, can justify such a prostitution of laws, which constitute the pillars of our whole system of jurisprudence. Will Congress be too strait-laced to carry the Constitution into honest effect, unless they may pass over the foundation-laws of the State government for the slightest convenience of theirs?

The negative of the President is the shield provided by the Constitution to protect against the invasions of the legislature: 1. The right of the Executive. 2. Of the Judiciary. 3. Of the States and State legislatures. The present is the case of a right remaining exclusively with the States, and consequently one of those intended by the Constitution to be placed under its protection,

It must be added, however, that unless the President’s mind on a view of everything which is urged for and against this bill, is tolerably clear that it is unauthorized by the Constitution; if the pro and the con hang so even as to balance his judgment, a just respect for the wisdom of the legislature would naturally decide the balance in favor of their opinion. It is chiefly for cases where they are clearly misled by error, ambition, or interest, that the Constitution has placed a check in the negative of the President.