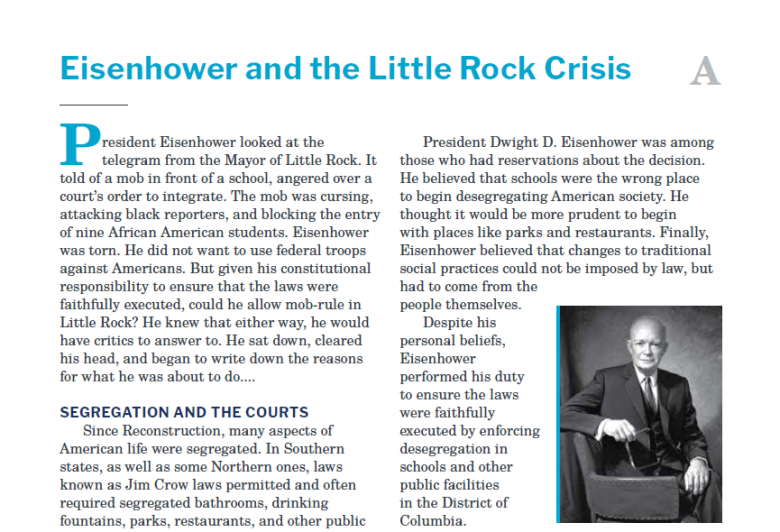 President Eisenhower looked at the telegram from the Mayor of Little Rock. It told of a mob in front of a school, angered over a court’s order to integrate. The mob was cursing, attacking black reporters, and blocking the entry of nine African American students. Eisenhower was torn. He did not want to use federal troops against Americans. But given his constitutional responsibility to ensure that the laws were faithfully executed, could he allow mob-rule in Little Rock? He knew that either way, he would have critics to answer to. He sat down, cleared his head, and began to write down the reasons for what he was about to do….

Segregation and the Courts

Since Reconstruction, many aspects of American life were segregated. In Southern states, as well as some Northern ones, laws known as Jim Crow laws permitted and often required segregated bathrooms, drinking fountains, parks, restaurants, and other public spaces. The Supreme Court upheld this legal practice in the case of Plessy v. Ferguson (1896).

A half century later, the Court reversed the Plessy decision. Brown v. Board of Education (1954) declared segregation in public schools “inherently unequal” and unconstitutional. In a related case known as Brown II (1955), the Court ordered schools to desegregate “with all deliberate speed.”

The Brown decision was hailed as a victory for equal treatment under law. It recognized the color-blind nature of the Constitution, and that government cannot treat people differently based on their race. But the decision was also criticized by some for not relying on strict constitutional principles and depending too heavily on social science. Southern resistance to the Brown II order was widespread. Many saw the decision as an infringement on powers reserved to the states under the Constitution.

President Dwight D. Eisenhower was among those who had reservations about the decision. He believed that schools were the wrong place to begin desegregating American society. He thought it would be more prudent to begin with places like parks and restaurants. Finally, Eisenhower believed that changes to traditional social practices could not be imposed by law, but had to come from the people themselves.

Despite his personal beliefs, Eisenhower performed his duty to ensure the laws were faithfully executed by enforcing desegregation in schools and other public facilities in the District of Columbia.

The Little Rock school board planned to start integration in the 1957-58 school year and the federal district court ordered it to begin. Nine African American students enrolled at Central High School. Segregationists threatened to protest. Arkansas Governor Orval Faubus ordered the state’s National Guard to the school to “keep order.” But in fact, the Guard members blocked the African American students from entering the school. The federal district court ordered Governor Faubus to withdraw the Guard, which he did.

They went in a rear door to avoid the angry mob that had once again gathered. African American journalists who had come to cover the event were attacked. Protesters soon forced their way into the building. For their own safety, police escorted the students out.

The Mayor of Little Rock sent President Eisenhower a telegram describing the events and concluding with a suggestion: “If the Justice Department desires to enforce the orders of the federal court in regard to integration in this city, the city police will be available to lend such support as you may require.”

Less than twenty-four hours later came a second telegram from the Mayor, telling of a mob larger than the day before and now begging for help: “I am pleading to you … in the interest of humanity, law, and order … to provide the necessary federal troops within several hours.”

Eisenhower hated the idea of using federal troops against Americans. However, he believed that his constitutional duty to enforce the law was, in his words, “inescapable.” His decision was the result of reflection and discussion with advisors. His handwritten notes show that he was concerned with protecting the image of the US as a nation committed to the rule of law.

The troops would be there “NOT to enforce integration, but to prevent opposition by violence to orders of a court.” He and his Attorney General discussed similar events from American history, including George Washington’s response to the Whiskey Rebellion. Finally, he reasoned that federalizing the Arkansas National Guard and sending the Army to Little Rock to enforce the court order would prevent pitting “brother against brother.”

Eisenhower issued a proclamation ordering the mob around the school to “disperse.” But again the mob returned. The next day, Eisenhower issued Executive Order 10730. This Order authorized military force “for the removal of obstruction of justice … with respect to matters relating to enrollment and attendance at public schools in the Little Rock School District, Little Rock, Arkansas.”

A thousand members from the 101st Airborne Division arrived to keep the peace. Exercising his constitutional power, the President also placed all 10,000 men of the Arkansas National Guard under federal control, removing them from the command of Governor Faubus. The soldiers kept the crowd under control, in some cases escorting protesters away at gunpoint.

The students were able to attend class almost a month into the school year. But images of US soldiers pointing rifles and other weapons at Americans shocked the nation. Governor Faubus protested Eisenhower’s actions, saying, “My fellow citizens, we are now an occupied territory … What is happening in America?” One US Senator from Georgia compared the US troops to Adolf Hitler’s storm troopers. Eisenhower did not make the decision lightly, and the debate over the wisdom of his response continues.