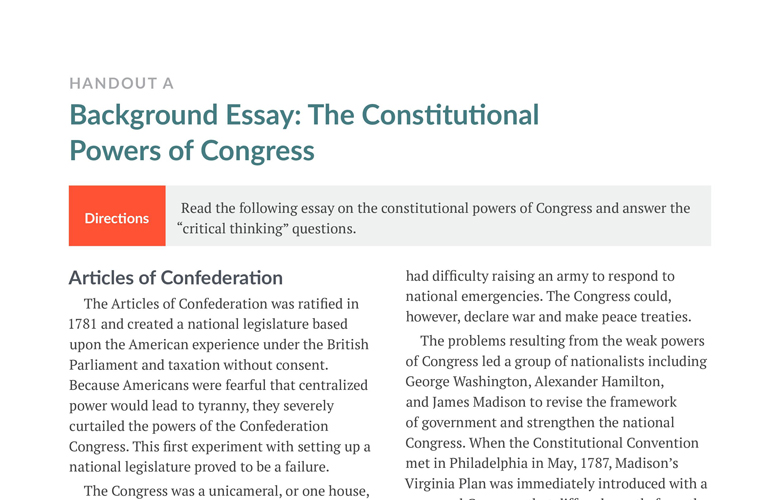 Directions: Read the following essay on the constitutional powers of Congress and answer the “critical thinking” questions.

The Articles of Confederation was ratified in 1781 and created a national legislature based upon the American experience under the British Parliament and taxation without consent. Because Americans were fearful that centralized power would lead to tyranny, they severely curtailed the powers of the Confederation Congress. This first experiment with setting up a national legislature proved to be a failure.

The Congress was a unicameral, or one house, legislature and therefore did not have the checks and balances that a bicameral, or two-house, legislature would have. Each state had only one vote regardless of the size of its population so Rhode Island had an equal vote to Virginia or Pennsylvania. Since laws or amendments to the Articles required a supermajority or unanimity in Congress, individual states such as Rhode Island often frustrated Congress from assuming adequate powers to govern the new nation.

The Congress also lacked the power to tax, regulate trade, and raise an army. The feebleness of Congress became especially problematic during the crises of the 1780s. States taxed each other’s trade and transportation and nearly fought several times. States routinely ignored the provisions of the 1783 Peace Treaty and requisitions of Congress for taxes. Most notably, Shays’ Rebellion demonstrated that the Congress had difficulty raising an army to respond to national emergencies. The Congress could, however, declare war and make peace treaties.

The problems resulting from the weak powers of Congress led a group of nationalists including George Washington, Alexander Hamilton, and James Madison to revise the framework of government and strengthen the national Congress. When the Constitutional Convention met in Philadelphia in May, 1787, Madison’s Virginia Plan was immediately introduced with a proposed Congress that differed greatly from the Confederation Congress.

The Virginia Plan proposed a bicameral Congress with both houses based upon proportional representation rather than the equality of states. Under the plan, the “first branch” of the legislature would be elected by the people, and the “second branch” elected by the first branch, from among those nominated by the state legislatures. The authors of the plan did not define the powers of Congress but made them more expansive than those of the Confederation Congress. Resolution 6 provided, “The National Legislature ought to be empowered to enjoy the Legislative Rights vested in Congress by the Confederation & moreover to legislate in all cases to which the separate States are incompetent.” The plan also gave the national legislature a power to veto state laws that conflicted with the Constitution, a provision which James Madison particularly favored.

The shape of the national legislature was subject to rancorous deliberation that bogged down the Convention in May and June. The deadlock ensued because of the fears about granting the Congress too many powers which would result in tyranny. The debate often split the large and small states and became even more acrimonious when William Paterson of New Jersey presented an alternative framework called the New Jersey Plan. Paterson offered a plan to preserve the unicameral legislature with equal suffrage that characterized the Confederation Congress. He simply wanted to grant Congress additional powers to tax and regulate trade that it lacked under the Articles.

Paterson proposed that, “The articles of Confederation ought to be so revised, corrected & enlarged, as to render the federal Constitution adequate to the exigencies of Government, & the preservation of the Union.”

In late June, Roger Sherman of Connecticut accurately told his fellow delegates, “We are now at a full stop.” Unless they devised a solution, the debate over the shape and powers of the Congress would destroy the Convention. Finally, in July, a committee proposed a compromise that narrowly passed over significant opposition especially by larger states.

The Powers of Congress

The powers of Congress were later enumerated in early August by a committee and included in Article I, Section 8. An “elastic clause” was included to allow Congress to make all “necessary and proper” laws related to specific powers that were listed. Article I, section 9 specifically prohibited Congress from exercising certain powers. Both the enumerated and restricted powers supported the principle of limited government. The House and Senate had similar legislative powers, though tax bills could not originate in the Senate because of the fear of an aristocracy. Finally, Article VI made the laws made by Congress, as well as treaties approved by the Senate, part of the supreme law of the land if they were consistent with the Constitution. In September, the Constitution was signed and eventually sent to state ratifying conventions. Supporters of the Constitution called “Federalists” and opponents called “Anti-Federalists” quickly wrote essays that appeared in newspapers to influence the public debate.

Anti-Federalist objections to congressional powers were numerous but centered on a few main arguments. First, they feared the enumerated powers granted to Congress. An Anti-Federalist writing anonymously under the pseudonym of Brutus warned in his first essay that “the power to lay taxes [is] unlimited.” He also warned that the power to raise armies would lead to standing armies and the “destruction of liberty.”

The “necessary and proper” clause caused several Anti-Federalists to raise a warning that this “indefinite” clause, as they termed it, would lead to greatly consolidated power in the new national government. This was particularly worrisome because of the federal supremacy clause of Article VI which made the national laws binding on all states. Many Anti-Federalists were keen to ensure that the rights of the states were not overshadowed by the national government’s new powers. Brutus later admitted in a fifth essay that the powers of Congress were constricted in Article I, Section 9, but feared the “restrictions are very limited” and would not restrain Congress from exercising unlimited powers.

The Federalists responded and explicated the powers and limits on Congress in several of their essays. They reminded readers of the feebleness of the Confederation Congress and the need for greater powers especially over taxation and regulation of interstate commerce. A weak government, they argued, would lead to more frequent acts of coercion against the states to compel obedience of federal law. Therefore, weakness actually caused tyranny.

The Federalists averred that the powers of government were limited and defined because the powers of Congress were enumerated in Article I, section 8. Alexander Hamilton argued in Federalist No. 33 that the “necessary and proper” clause was an essential means for carrying laws into execution. In other words, the laws of Congress must be necessary and proper according to its enumerated powers. It was not a grant to Congress to do whatever it wanted.

Finally, the Federalists disagreed that a legislature should mirror the people, being composed of the same interests, feelings, and opinions that the people have at large. They wanted a legislature where the wisest and most virtuous citizens could resist the will of the majority when it was in error. As James Madison famously proclaimed in Federalist No. 10, representation should “refine and enlarge the public views” by passing them through the medium of a chosen body of citizens, whose wisdom may best discern the true interest of their country, and whose patriotism and love of justice will be least likely to sacrifice it to temporary or partial considerations. Under such a regulation, it may well happen that the public voice, pronounced by the representatives of the people, will be more consonant to the public good than if pronounced by the people themselves, convened for the purpose.”

The Constitution was ratified and went into effect with the First Congress in 1789. Within a few years, Secretary of the Treasury Hamilton’s financial plan including a national bank caused a heated feud over the meaning of the “necessary and proper” clause when Thomas Jefferson and James Madison thought the national government was acting beyond its constitutional powers. In the mid-nineteenth century, a continuing debate occurred over whether “internal improvements” or infrastructure spending by the national government was constitutional. Throughout the twentieth century, clashes over the scale, scope, and constitutionality of congressional laws animated political discussion. The debates of the American Founding about the powers of Congress endured for centuries after the Constitution was made the law of the land.