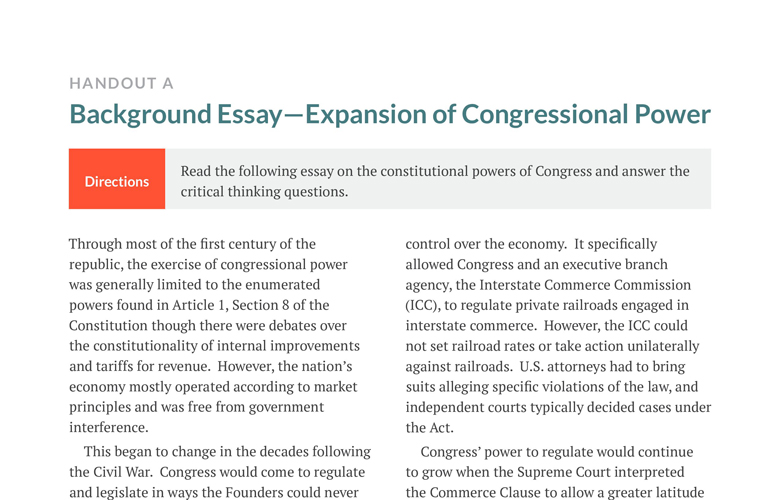 Directions: Read the following essay on the constitutional powers of Congress and answer the critical thinking questions.

Through most of the first century of the republic, the exercise of congressional power was generally limited to the enumerated powers found in Article 1, Section 8 of the Constitution though there were debates over the constitutionality of internal improvements and tariffs for revenue. However, the nation’s economy mostly operated according to market principles and was free from government interference.

This began to change in the decades following the Civil War. Congress would come to regulate and legislate in ways the Founders could never have imagined. Much of the expansion of federal power was justified by a new understanding of the Commerce Clause in Article I, section 8, which empowered Congress to, “regulate interstate commerce with foreign nations, and among the several states.” James Madison had clarified the Founders’ intent in crafting the Commerce Clause in a letter to Joseph Cabell in 1829:

“It was intended as a negative and preventive provision against injustice among the States themselves, rather than as a power to be used for the positive purposes of the General Government, in which alone, however, the remedial power could be lodged.”

With the passage of the Commerce Act of 1887, Congress began to impose more national control over the economy. It specifically allowed Congress and an executive branch agency, the Interstate Commerce Commission (ICC), to regulate private railroads engaged in interstate commerce. However, the ICC could not set railroad rates or take action unilaterally against railroads. U.S. attorneys had to bring suits alleging specific violations of the law, and independent courts typically decided cases under the Act.

Congress’ power to regulate would continue to grow when the Supreme Court interpreted the Commerce Clause to allow a greater latitude for the meaning of the Commerce Clause. In 1905, in the case of Swift v. U.S., the Court would establish the important precedent that the Commerce Clause did not necessarily only refer to actions of direct interstate commerce. The Swift case allowed the regulation of meatpackers, who operated only within specific states, because they were part of a “current of commerce,” that flowed between parties in multiple states.

One area over which the Court did not cede power to Congress was the regulation of the employee/employer relationship. Starting with the case of Lochner v. New York (1905), the Court ruled that individuals had the liberty to sell their labor for any rate they deemed acceptable, preserving a free market in labor. In Lochner, the court invalidated a New York state law that restricted the number of hours that bakery employees could work. In what would be referred to as the “Lochner Era” the Court would throw out minimum wage and working conditions legislation as an unconstitutional infringement of the individual liberty of employees. Even during this period, however, the courts upheld more restrictions on the liberty of contract than they overturned.

During the 1930s New Deal, the Supreme Court instituted a constitutional revolution with a fundamentally new understanding of the Commerce Clause. The Court had invalidated key pieces of New Deal legislation as unconstitutional congressional regulation of commerce within states. However, in the case of West Coast Hotel v. Parrish (1937), the Supreme Court upheld a Washington State minimum wage law. This ended the judicial resistance to New Deal legislation, which opened the floodgates to expanded congressional power under the Commerce Clause, and to the development of the modern administrative state. The case effectively ended the Lochner Era. In his opinion Charles Evans Hughes clearly threw out the laissez-faire interpretation that protected an individual’s right to contract their labor without congressional oversight:

“Constitution does not speak of freedom of contract. It speaks of liberty and prohibits the deprivation of liberty without due process of law. In prohibiting that deprivation, the Constitution does not recognize an absolute and uncontrollable liberty… But the liberty safeguarded is liberty in a social organization which requires the protection of law against the evils which menace the health, safety, morals and welfare of the people.”

Further, Hughes justified expanding congressional power because of what he saw as an unequal relationship between employers and employees:

“The proprietors of these establishments and their operatives do not stand upon an equality, and that their interests are, to a certain extent, conflicting…In such cases, self-interest is often an unsafe guide, and the legislature may properly interpose its authority.”

The regulatory interpretation of the Commerce Clause would be taken further by the case of U.S. v. Darby Lumber (1941). By upholding the Fair Labor Standards Act of 1938, the Supreme Court set a precedent allowing Congress to regulate any production process of any goods that would be eventually shipped across state lines. In the majority opinion of an 8-0 decision, Justice Harlan Stone took the interpretation a step further by affirming that congressional authority under the Commerce Clause was virtually unlimited:

“The power of Congress over interstate commerce “is complete in itself, may be exercised to its utmost extent, and acknowledges no limitations other than are prescribed in the Constitution.”

The doctrine explained by Stone would deny the courts a power to review any exercise of power under the Commerce Clause, unless it was an explicit violation of one of the denied powers of Congress in the Constitution. This was a great expansion of congressional power over interstate commerce beyond that authorized by the enumerated powers of the Constitution.

These precedents would lead to a tremendous growth of congressional power during the second half of the twentieth century. Congress would take on regulatory oversight of areas previously thought to be left in the domain of the states. It would create the Department of Health, Education, and Welfare in 1953 and the Department of Housing and Urban Development in 1965. These changes led to Congress having authority not only over what was previously left to the states but now to the local and individual spheres under the expansive understanding of the Commerce Clause.

In 1977, Congress created the Department of Education, giving unprecedented federal control over how the states delivered public education. The Congress would even apply the Commerce Clause to local gun control laws. It was this overreach that would lead the Supreme Court to change course after half of a century of expanded congressional powers in the name of the Commerce Clause.

The case of U.S. v. Lopez (1995) invalidated the Gun-Free School Zone Act of 1990. That act, in legislation that had nothing to do with interstate commerce, had forbidden the possession of firearms near schools. The Court rejected the constitutionality of the law and looked at the Commerce Clause through a new lens after fifty years. The Court stated that since there is no connection between interstate commerce and firearms possession, Congress could not regulate guns near schools based upon the Commerce Clause. As Chief Justice William Rehnquist wrote in the majority opinion:

“We would have to pile inference upon inference in a manner that would bid fair to convert congressional authority under the Commerce Clause to a general police power of the sort retained by the States.”

There has been a movement to further constrain the powers of Congress in the House of Representatives to ensure that legislation is based upon constitutional powers in Article I. In the 2011 “GOP Pledge to America,” Republican members promised to include a clause on any new bill, citing the section of the Constitution that had authorized it. After winning a majority, Republicans in Congress implemented a rules change for the House of Representatives of the 114th Congress.

“Clause 7 of Rule XII requires that each bill or joint resolution introduced in the House be accompanied by a Constitutional Authority Statement citing the power(s) granted to Congress in the Constitution to enact the proposed law.”

Although there are some signs of a change of course, the U.S. Congress remains empowered to take action in areas that have profound effect on the lives of American citizens and business under the Commerce Clause. Congressional powers significantly increased during the course of the twentieth century and were often exercised beyond constitutional authority.