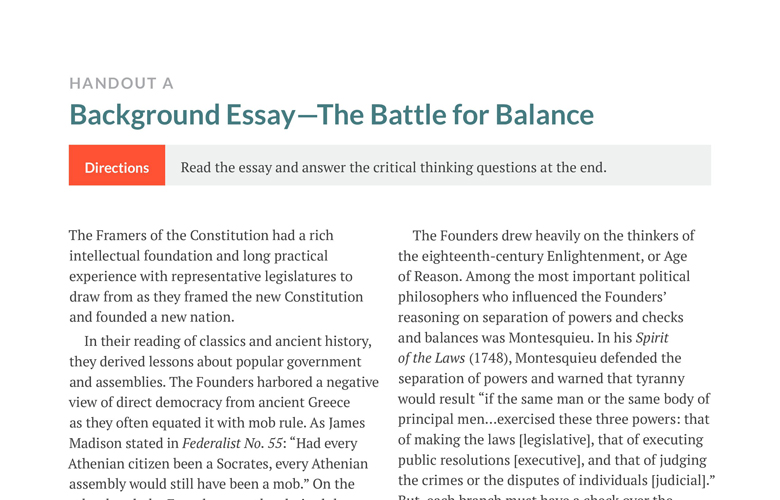 Background Essay: The Battle for Balance

Directions: Read the essay and answer the critical thinking questions at the end.

The Framers of the Constitution had a rich intellectual foundation and long practical experience with representative legislatures to draw from as they framed the new Constitution and founded a new nation.

The British tradition of constitutional monarchy with different branches of government and a representative Parliament divided into a House of Lords and a House of Commons also provided an example of government with separation of powers. Most of the American colonial legislatures, and those of the states after declaring independence, followed this example and were bicameral, or had two houses.

The Founders drew heavily on the thinkers of the eighteenth-century Enlightenment, or Age of Reason. Among the most important political philosophers who influenced the Founders’ reasoning on separation of powers and checks and balances was Montesquieu. In his Spirit of the Laws (1748), Montesquieu defended the separation of powers and warned that tyranny would result “if the same man or the same body of principal men…exercised these three powers: that of making the laws [legislative], that of executing public resolutions [executive], and that of judging the crimes or the disputes of individuals [judicial].” But, each branch must have a check over the others in order to “correct what has been ordered by another.”

The states ratified the Articles of Confederation in 1781. It included many principles that sought to limit national and executive power strictly in the framework of government, but those principles marred its practical effectiveness. The national Congress was unicameral and based upon equal suffrage regardless of the size of each state. Moreover, this “firm league of friendship” was more of an alliance of separate states than a plan of government with adequate powers for a strong nation-state. The federal principle at the time located sovereignty and the vast majority of powers in the states. The Articles delegated few powers to the national government which lacked power to tax, raise armies, or regulate interstate commerce. The Congress selected a weak national executive, and a national judiciary did not exist. Therefore, the Articles did not provide for a separation of powers in different branches or a system of checks and balances.

The Framers at the Constitutional Convention debated the principles of republican government, federalism, separation of powers, and checks and balances throughout the summer of 1787. They unanimously agreed that the government would be republican, or representative of the sovereign people, who gave their consent to form a government to protect their natural rights. James Madison (Virginia) considered “an election of one branch at least of the Legislature by the people immediately, as a clear principle of free Government.” James Wilson (Pennsylvania) agreed that the new government “ought to flow from the people at large.”

The idea of federalism was central to the discussion of the Congress as the Virginia and New Jersey Plans were debated throughout June and early July. Oliver Ellsworth (Connecticut), supported often by John Dickinson (Delaware) and George Mason (Virginia), defended the federal principle that the states would share powers in the national government by having state legislatures chose Senators who would represent the interests of the states. Ellsworth said, “An equality of voices was conformable to the federal principle and was necessary to secure the Small States against the large.”

When the delegates deliberated over a national executive and judiciary in July and August, they based their discussions upon the principles of a separation of powers and checks and balances. Each branch would have a different function and powers, but each would have a check over the other. For example, the legislature specifically would be checked by vetoes by the executive but could override vetoes by a two-thirds vote in both houses. The legislature could impeach and remove the executive and judges from office. The Senate would vote whether to ratify treaties made by the executive.

One key feature of both principles was embodied in the idea of a bicameral Congress with somewhat different powers in each house of Congress and the central provision that a bill would have to pass both houses to become law. Therefore the separation of powers encompassed not only the three branches of government, but also an internal separation of powers within the legislature itself. This was done to prevent the legislature from becoming too powerful and too beholden to an immediate majority. As Madison wrote in Federalist No. 51, “A dependence on the people is, no doubt, the primary control on the government, but experience has taught mankind the necessity of auxiliary precautions.” The precautions were the constitutional principles and devices of dividing and checking power. In republics, the “legislative authority necessarily predominates” and threatens to produce a legislative tyranny. Therefore, a control on that power was “to divide the legislature into different branches” with different terms and powers.

In Federalist No. 47, Madison explained the principles of separation of powers and checks and balances that were drawn from Montesquieu. “The accumulation of all powers, legislative, executive, and judiciary, in the same hands… may justly be pronounced the very definition of tyranny.” At the same time, however, Madison demonstrated that the Constitution and state constitutions have checks and balances of the separate branches over each other to prevent any branch from assuming too much power and creating tyranny.

The Anti-Federalists disagreed with the Federalist understanding of the new Constitution and its principles related to the legislative branch. In his first essay, Brutus warned that the republican principle would be violated in an expansive country because “the people at large would be acquainted with very few of their rulers.” One significant unifying concern of different Anti-Federalist writers was that so much power was consolidated in the national government that it destroyed the federal principle and the power of the states regardless of the existence of the Senate. Many other Anti-Federalists feared that a small and aristocratic Senate, pursuing privilege and self-interest, would subvert republican government by forming dangerous, corrupt combinations, especially with the executive. In addition, Anti-Federalists anticipated that the powerful new central government would violate the rights of the people, which led to their insistence that a bill of rights be added to the Constitution. The new government in the early republic worked out the specific boundaries of the constitutional powers of Congress in relation to the other branches and the states when specific circumstances arose. The arguments of the Federalists seemed to have been vindicated by good governance until after the Civil War when the constitutional lines between the branches of government and the national and state governments became increasingly blurred.