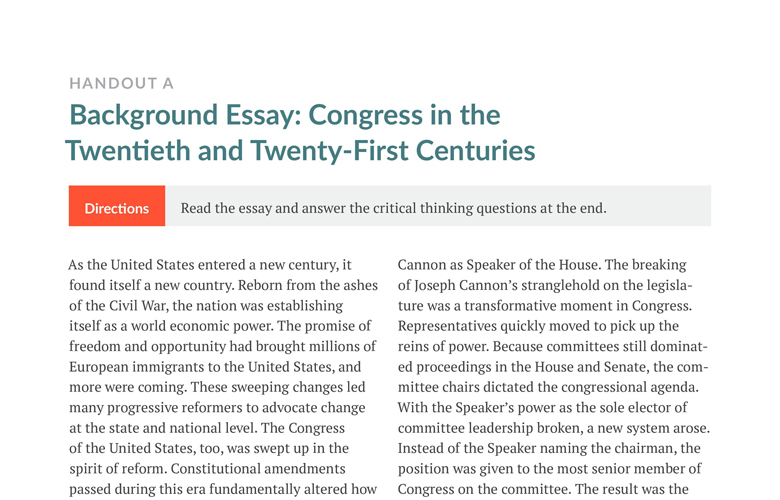 Background Essay: Congress in the Twentieth and Twenty-First Centuries

As the United States entered a new century, it found itself a new country. Reborn from the ashes of the Civil War, the nation was establishing itself as a world economic power. The promise of freedom and opportunity had brought millions of European immigrants to the United States, and more were coming. These sweeping changes led many progressive reformers to advocate change at the state and national level. The Congress of the United States, too, was swept up in the spirit of reform. Constitutional amendments passed during this era fundamentally altered how the Congress functions. In addition, Congress changed its rules to reduce the influence of party leadership and decentralize power, distributing it to individual members and committees. As the century progressed, the legislature continued to shift and adapt to better respond to its ever expanding reach.

Changes in the House of Representatives

During the latter part of the 1800s, the power of the Speaker of the House grew dramatically. It peaked under the speaker ship of Joseph Cannon(1903-1911), a representative from Illinois. His power rested on his chairmanship of the rules committee and his authority to name the chairmen of the various committees in Congress responsible for vetting legislation. In 1910, members tired of his control revolted and overthrew Cannon as Speaker of the House. The breaking of Joseph Cannon’s stranglehold on the legislature was a trans formative moment in Congress. Representatives quickly moved to pick up there in of power. Because committees still dominated proceedings in the House and Senate, the committee chairs dictated the congressional agenda.With the Speaker’s power as the sole elector of committee leadership broken, a new system arose. Instead of the Speaker naming the chairman, the position was given to the most senior member of Congress on the committee. The result was the increase in power of seniority in Congress.

Now, instead of party leaders controlling the Congress, the most senior members chairing the most powerful committees took control. Those members who made a career in Congress suddenly gained immense power. The most senior members were those in the South, where one party was dominant and most incumbents coasted to victory for decades. Power was decentralized down to committees, but centralized in the hands of the various committee chairs. The era of the “czars” was followed by an era of the committee “barons.”

Reform in the Senate

While the landscape of Congress was shifting, movements to reform the Senate were also under way. Many of the new progressive reformers demanded a change to the process of electing senators.

The Founders intended the Senate to be the more deliberative congressional body who would act in the interests of the states themselves. To accomplish this, they granted its members six-year terms and had senators selected indirectly by the state legislatures rather than directly by the people. This part of the “Great Compromise” was designed to craft a Senate that would, in the words of James Madison during the Constitutional Convention on June 26, 1787,

“select a portion of enlightened citizens, whose limited number, and firmness might seasonably interpose against impetuous councils.”

In this way, the Senate was meant to be a more stable branch of the federal government that could take the time to deliberate legislation. It would be,

“a firm, wise and impartial body, it might not only give stability to the General Government inits operations on individuals, but hold an even balance among different States.”

Political reformers, however, stated that this system was failing. They claimed that the system of indirectly electing senators had been co-opted by privileged classes, and that these senators were unresponsive to the true will of the people. This coincided with a drive to expand the electorate at a state and national level. States worked to democratize their own electoral systems and believed the federal government should follow suit. The result was the passage of the Seventeenth Amendment, providing for direct popular election of U.S. senators. This change led to a fundamental shift in the operations of the federal government and in the principle of federalism.

“The Senate of the United States is the only legislative body in the world which cannot act when its majority is ready for action. A little group of willful men, representing no opinion but their own, have rendered the great government of the United States helpless and contemptible.”

The Senate responded by passing Rule XXII, allowing for a two-thirds majority to vote for cloture, or the ending of debate on the topic, and so end a filibuster. Revised several times over the succeeding decades, the rule today requires three-fifths of the Senate (60 votes) for a vote of cloture. Then debate on a bill can proceed for only thirty more hours before it is brought up fora vote.

The New Deal and an Expanding Executive Branch

By the 1930s, Democrats established a firm grasp on both the House and Senate and passed the New Deal legislation in response to the Great Depression. During the New Deal, the reach of the federal government greatly expanded. The New Deal programs gave the government vast new administrative responsibilities, and Congress authorized dozens of new executive agencies. These agencies represented a massive growth in the power of the executive. By 1946,however, many believed the rules governing the day-to-day operations of Congress had become antiquated.

That year, in an effort to maintain their check on the executive branch, Congress required that each agency have congressional oversight. The power and vast number of standing congressional committees limited Congress’s ability to effectively pass timely legislation. In an effort to increase efficiency, Congress passed the Legislative Reorganization Act of 1946. The act decreased the number of committees in the House from 48 to 19 and in the Senate from 33 to 15. It also detailed specific committee jurisdictions to avoid overlapping duplication of efforts. In addition, it provided for professional committee staff to be hired to help develop complex legislation, and it established a pay raise for members of Congress and new disclosure requirements for lobbyists.

The Legislative Reorganization Act illustrated the new, decentralized Congress. In the era of party control, most decisions and policies were made first by party leaders, and then by the majority party voting on the floor of Congress. By the middle of the twentieth century, power shifted to smaller units within Congress. Having delegated its power to agencies, Congress strengthened the committees that had jurisdiction over the agencies’ policy areas so that they could shift from legislation to oversight. Now instead of passing legislation in response to the majority, the emphasis in Congress shifted to supervising the agencies’ policies that implemented existing programs. These committees reflected not the will of Congress and the majority as a whole, but the organized interests that were most concerned with that area of policy. Further reforms were made to the committee system in 1970. The Legislative Reform Act of 1970 lessened the power of committee chairs by ensuring greater transparency in committee meetings and more inclusion of minority views. This gave all members of the committee more power to direct legislative initiatives. In the middle of the 1970s power was decentralized even further, down to subcommittees that could hire their own staff and consider legislation without the permission of the chair of the committee under which they served.

In 1994, a minor reversal of this decentralization occurred. The internal organization of Congress shifted once again as Newt Gingrich assumed the role of Speaker of the House. Winning the first Republican majority in five decades, Gingrich was determined to achieve what he saw as crucial pieces of legislation. Under his stewardship, the Speaker once again gained power by naming committee appointments, selecting chairs, and controlling the congressional rules committees.

The Influence of Technology

As a result of historical changes, Congress has dramatically changed how it functions. Although outwardly the same, much of what drives Congress has changed. Instead of deliberating collectively on the floor, and engaging in great debates on the policy issues of the day, Congress has shifted its work into committees, where independent members can appeal to the constituencies that elect them. Technology has made this even easier. The Cable-Satellite Public Affairs Network, or C-SPAN, now allows anyone in the world to watch the day-to-day proceedings of Congress. Therefore, every floor speech is potentially a chance to campaign directly to constituents. Technology has also given members the ability to know the opinions of their constituents and communicate directly to them. At the same time, 24-hour news channels have increased the visibility of all members of Congress. All of these changes have made individual members independent of each other and less likely to compromise. Rather than working together, members of Congress are re-elected by building personal power bases and appealing to their own constituencies back in their districts. We are seeing the effects of these changes in the reduced ability of Congress to compromise for the sake of the good of the whole country.

Democratically elected republican government is slow, messy, and often frustrating. Throughout the history of the United States, the operations of Congress have been adapted. Majorities have shifted and fallen, coalitions have risen and faded. Long and often brutal legislative battles have played out. But, through it all, men and women elected by us, to speak for us, continue to create and pass legislation, shaping the nation for generations to come. Our government, of, by, and for the people continues to depend on their watchful participation more than ever.