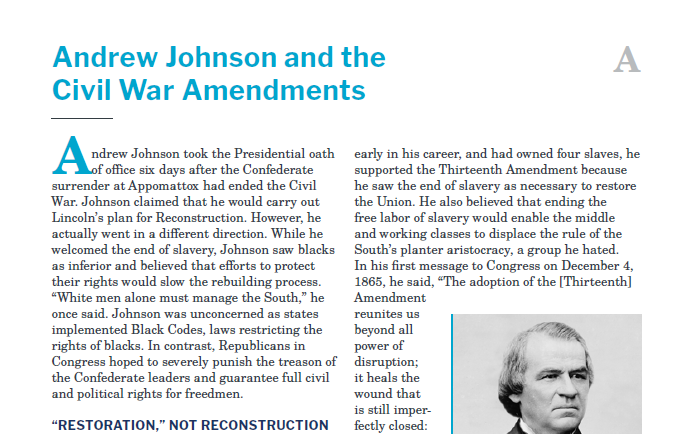 Andrew Johnson took the Presidential oath of office six days after the Confederate surrender at Appomattox had ended the Civil War. Johnson claimed that he would carry out Lincoln’s plan for Reconstruction. However, he actually went in a different direction. While he welcomed the end of slavery, Johnson saw blacks as inferior and believed that efforts to protect their rights would slow the rebuilding process. “White men alone must manage the South,” he once said. Johnson was unconcerned as states implemented Black Codes, laws restricting the rights of blacks. In contrast, Republicans in Congress hoped to severely punish the treason of the Confederate leaders and guarantee full civil and political rights for freedmen.

Johnson, like Lincoln, maintained throughout the war that the Southern states had not actually seceded. The unlawful rebellion of certain people in the Southern states had deprived those states of the republican form of government guaranteed by the Constitution. For Johnson, the purpose of the war was to restore the Union and its republican form of government—not to protect the rights of blacks. In his first Annual Message to Congress, he said, “The Constitution is the work of ‘the people of the United States,’ and it should be as indestructible as the people.”

The Constitution contained no set of rules for states leaving the Union, nor for their re-entry. Which branch of the national government would be in charge of Reconstruction? As President, Johnson maintained that Congress had no role in what he called the “restoration” process. While Congress was not in session in 1865, Johnson planned to restore the Southern states to the Union based mainly on their ratification of the Thirteenth Amendment which ended slavery.

While Johnson had opposed emancipation early in his career, and had owned four slaves, he supported the Thirteenth Amendment because he saw the end of slavery as necessary to restore the Union. He also believed that ending the free labor of slavery would enable the middle and working classes to displace the rule of the South’s planter aristocracy, a group he hated. In his first message to Congress on December 4, 1865, he said, “The adoption of the [Thirteenth] Amendment reunites us beyond all power of disruption; it heals the wound that is still imperfectly closed: it removes slavery, the element which has so long perplexed and divided the country…” All of the former Confederate states were ready to reenter the Union by the end of the year.

Members of Congress believed the legislative branch should guide Reconstruction. Among the actions Congress took to assert its power were extension of the Freedmen’s Bureau, the Civil Rights Act of 1866, and several Reconstruction Acts. In the struggle between presidential authority and Congressional power, Johnson vetoed all of these bills. Congress quickly overrode his vetoes.

Congress hoped to make protection of blacks’ civil rights permanent through the Fourteenth Amendment to the Constitution. The Fourteenth Amendment was the first constitutional amendment to place limits on state governments. It defined citizenship and required that “no state shall make or enforce any law” that denied due process and equal protection of the laws. States that denied blacks the right to vote would have their representation in Congress reduced proportionally. Ex-Confederate leaders would not be able to hold office.

The Fourteenth Amendment was a significant revision to the constitutional principle of federalism. The amendment dramatically limited the powers of states in an unprecedented way. Seceded states would not be admitted back to the Union unless they ratified it.

Johnson objected to the Fourteenth Amendment for several reasons. He argued that it was improper to amend the Constitution when Southern states were not represented in Congress. In addition, he believed that each state should be able to determine who had the right to vote. There is no constitutional role for a President in the amendment process, but Johnson sent Congress a special message explaining his disapproval of the amendment. Over the next few months he advised Southern legislatures to reject it.

Tennessee ratified the Fourteenth Amendment. It was readmitted to the Union in 1866. When the Republicans gained strength in congressional elections that year, the relationship between President and Congress became even more strained. The new Congress added more conditions that the Southern states had to meet in order to rejoin the Union. Under federal supervision as military districts, states slowly fulfilled the requirements. By 1868, seven more states had been readmitted.

Johnson and Congress continually clashed over Reconstruction. Congress eventually impeached him, though the vote fell one short of the two-thirds majority required to remove him from office.

Johnson saw a limited role for the federal government. He accepted the end of slavery but sought to “restore” the South to the Union while preserving states’ powers. The Republicans hoped to “reconstruct” the South in a manner that would both punish the Confederates and assure Republican political power by protecting the rights of blacks. Their conflict set the stage for an impeachment trial of the President, and reflected social and legal tensions that continue into the twenty-first century.