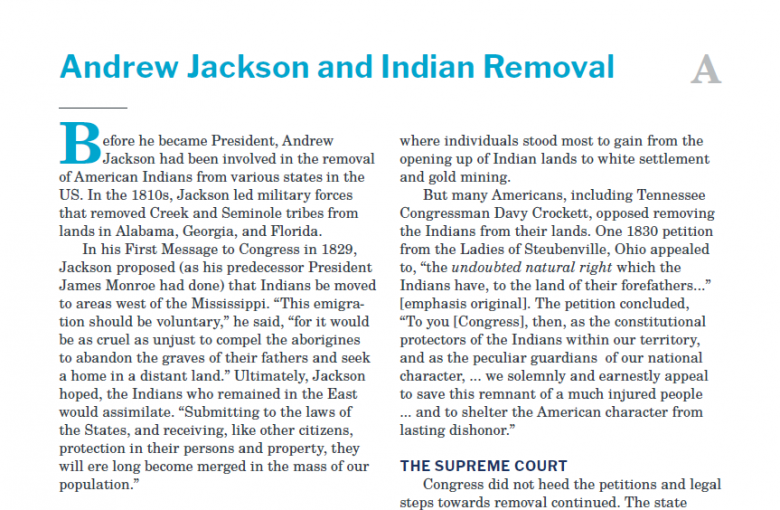 Before he became President, Andrew Jackson had been involved in the removal of American Indians from various states in the US. In the 1810s, Jackson led military forces that removed Creek and Seminole tribes from lands in Alabama, Georgia, and Florida.

In his First Message to Congress in 1829, Jackson proposed (as his predecessor President James Monroe had done) that Indians be moved to areas west of the Mississippi. “This emigration should be voluntary,” he said, “for it would be as cruel as unjust to compel the aborigines to abandon the graves of their fathers and seek a home in a distant land.” Ultimately, Jackson hoped, the Indians who remained in the East would assimilate. “Submitting to the laws of the States, and receiving, like other citizens, protection in their persons and property, they will ere long become merged in the mass of our population.”

Jackson pushed the Indian Removal Act through Congress, and signed it into law once both Houses approved it in 1830. This law authorized the President to negotiate treaties with Indian tribes, and to buy their land east of the Mississippi River in exchange for western lands outside of US territory. In his Second Message to Congress, Jackson explained what he believed would be the benefits of “speedy removal”: States would be able to advance “in population, wealth, and power,” and the Indian tribes would be freed from state power and able to “pursue happiness in their own way …. perhaps … becom[ing] an interesting, civilized, and Christian community.”

Indian Removal was popular among white Americans. It was particularly popular in the South, where individuals stood most to gain from the opening up of Indian lands to white settlement and gold mining.

But many Americans, including Tennessee Congressman Davy Crockett, opposed removing the Indians from their lands. One 1830 petition from the Ladies of Steubenville, Ohio appealed to, “the undoubted natural right which the Indians have, to the land of their forefathers…” [emphasis original]. The petition concluded, “To you [Congress], then, as the constitutional protectors of the Indians within our territory, and as the peculiar guardians of our national character, … we solemnly and earnestly appeal to save this remnant of a much injured people … and to shelter the American character from lasting dishonor.”

Congress did not heed the petitions and legal steps towards removal continued. The state of Georgia passed a series of laws designed to persuade the Cherokee to give up their lands and leave. Some of these re-drew the boundaries of Cherokee lands; banned whites from entering their lands without a permit; and forbade the Cherokee from digging for gold.

Seven white missionaries living on Cherokee land appealed their case to the Supreme Court. In Worcester v. Georgia (1831), the Court declared that Georgia could not regulate activity on the Cherokee lands. Chief Justice John Marshall wrote, “The Cherokee nation, then, is a distinct community occupying its own territory in which the laws of Georgia can have no force. The whole intercourse between the United States and this nation is, by our Constitution and laws, vested in the government of the United States.”

The state of Georgia ignored the decision and continued regulatory activity on Cherokee lands. When he heard of the ruling, Jackson is reported to have said, “John Marshall has made his decision, now let him enforce it!” He took no action against Georgia to enforce the ruling. Though the stage was set for a possible confrontation between Georgia and the federal government, or one between the national judiciary and executive branches, no such confrontation took place.

In another Supreme Court case, Cherokee Nation v. Georgia (1831), the Court expressly denied that the Cherokee were a “foreign nation” as referred to in the Constitution. “They may more correctly, perhaps, be denominated domestic dependent nations… Their relations to the United States resemble that of a ward to his guardian. They look to our Government for protection, rely upon its kindness and its power, appeal to it for relief to their wants, and address the President as their Great Father.” Therefore, the ruling held, they had no right to sue in federal court to prevent their removal from tribal lands.

At the time, most Americans did not believe that the US would ever extend beyond the Mississippi. Many truly believed that American Indians would benefit from self-government away from American settlers. Although there was some protest of Indian Removal, especially in the North, Jackson’s policies were popular. He was overwhelmingly reelected in 1832.

Chief Ross argued that the Treaty was a fraud and urged the US Senate not to ratify the treaty. However, it was approved and President Jackson signed it into law.

The Treaty provided a two-year period for Cherokee families to leave voluntarily, and gave them money for the journey. In the summer of 1838 the deadline passed. Jackson’s successor, President Martin Van Buren, ordered the US Army to proceed with forced removal. During the winter of 1838-1839, 14,000 Cherokee men, women, and children were forced to march from their homes to lands in present-day Oklahoma. Four thousand people died. Historians have called the Trail of Tears, as it has come to be known, one of the most disgraceful and dishonorable chapters in American history.