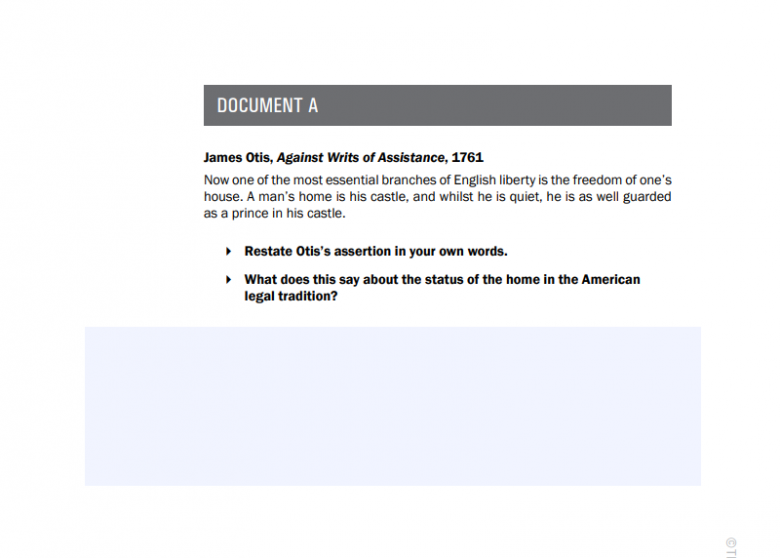 James Otis, Against Writs of Assistance, 1761

Now one of the most essential branches of English liberty is the freedom of one’s house. A man’s home is his castle, and whilst he is quiet, he is as well guarded as a prince in his castle.

Amendment I: Congress shall make no law respecting an establishment of religion, or prohibiting the free exercise thereof; or abridging the freedom of speech, or of the press; or the right of the people peaceably to assemble, and to petition the government for a redress of grievances.

Amendment III: No soldier shall, in time of peace be quartered in any house, without the consent of the owner, nor in time of war, but in a manner to be prescribed by law.

Amendment IV: The right of the people to be secure in their persons, houses, papers, and effects, against unreasonable searches and seizures, shall not be violated, and no warrants shall issue, but upon probable cause, supported by oath or affirmation, and particularly describing the place to be searched, and the persons or things to be seized.

Amendment V: No person …shall be compelled in any criminal case to be a witness against himself.…

Amendment IX: The enumeration in the Constitution, of certain rights, shall not be construed to deny or disparage others retained by the people.

No state shall … deprive any person of life, liberty, or property, without due process of law.

Any person who uses any drug, medicinal article or instrument for the purpose of preventing conception shall be fined not less than fifty dollars or imprisoned not less than sixty days nor more than one year or be both fined and imprisoned.…

Any person who assists, abets, counsels, causes, hires or commands another to commit any offense may be prosecuted and punished as if he were the principal offender.

[T]he Act of 1922 [requiring all parents to send their children to public schools] unreasonably interferes with the liberty of parents and guardians to direct the upbringing and education of children under their control. As often heretofore pointed out, rights guaranteed by the Constitution may not be abridged by legislation which has no reasonable relation to some purpose within the competency of the state.

“Margaret Sanger Has Her Mouth Covered,” 1929 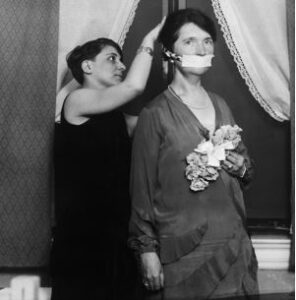 [The scope of the Due Process Clause only includes rights which] have been found to be implicit in the concept of ordered liberty, and thus, through the Fourteenth Amendment, become valid as against the states … [and which are] the very essence of a scheme of ordered liberty.

[T]he full scope of the liberty guaranteed by the Due Process Clause [of the Fourteenth Amendment] cannot be found in or limited by the precise terms of the specific guarantees elsewhere provided in the Constitution. This “liberty” is not a series of isolated points pricked out in terms of the taking of property; the freedom of speech, press, and religion; the right to keep and bear arms; the freedom from unreasonable searches and seizures; and so on. It is a rational continuum which, broadly speaking, includes a freedom from all substantial arbitrary impositions and purposeless restraints.… 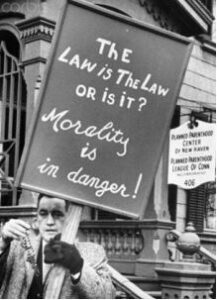 [S]pecific guarantees in the Bill of Rights have penumbras, formed by emanations from those guarantees that help give them life and substance. Various guarantees create zones of privacy. The right of association contained in the penumbra of the First Amendment is one. …The Third Amendment in its prohibition against the quartering of soldiers “in any house” in time of peace without the consent of the owner is another facet of that privacy. The Fourth Amendment explicitly affirms the “right of the people to be secure in their persons, houses, papers, and effects, against unreasonable searches and seizures.” The Fifth Amendment in its Self-Incrimination Clause enables the citizen to create a zone of privacy which government may not force him to surrender to his detriment. The Ninth Amendment provides: “The enumeration in the Constitution, of certain rights, shall not be construed to deny or disparage others retained by the people.”

The Fourth and Fifth Amendments were described … as protection against all governmental invasions “of the sanctity of a man’s home and the privacies of life.”

We have had many controversies over these penumbral rights of “privacy and repose.” These cases bear witness that the right of privacy which presses for recognition here is a legitimate one.

The present case, then, concerns a relationship lying within the zone of privacy created by several fundamental constitutional guarantees. And it concerns a law which, in forbidding the use of contraceptives rather than regulating their manufacture or sale, seeks to achieve its goals by means having a maximum destructive impact upon that relationship. Such a law cannot stand in light of the familiar principle, so often applied by this Court, that a “governmental purpose to control or prevent activities constitutionally subject to state regulation may not be achieved by means which sweep unnecessarily broadly and thereby invade the area of protected freedoms.”

Would we allow the police to search the sacred precincts of marital bedrooms for telltale signs of the use of contraceptives? The very idea is repulsive to the notions of privacy surrounding the marriage relationship.

We deal with a right of privacy older than the Bill of Rights – older than our political parties, older than our school system. Marriage is a coming together for better or for worse, hopefully enduring, and intimate to the degree of being sacred….

Since 1791 [the Ninth Amendment] has been a basic part of the Constitution which we are sworn to uphold. To hold that a right so basic and fundamental and so deep-rooted in our society as the right of privacy in marriage may be infringed because that right is not guaranteed in so many words by the first eight amendments to the Constitution is to ignore the Ninth Amendment and to give it no effect whatsoever.

Since 1879 Connecticut has had on its books a law which forbids the use of contraceptives by anyone. I think this is an uncommonly silly law. As a practical matter, the law is obviously unenforceable, except in the oblique context of the present case. As a philosophical matter, I believe the use of contraceptives in the relationship of marriage should be left to personal and private choice, based upon each individual’s moral, ethical, and religious beliefs. As a matter of social policy, I think professional counsel about methods of birth control should be available to all, so that each individual’s choice can be meaningfully made. But we are not asked in this case to say whether we think this law is unwise, or even asinine. We are asked to hold that it violates the United States Constitution. And that I cannot do. 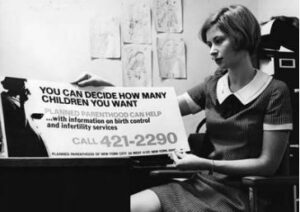 KEY QUESTION: Support or refute the Supreme Court’s ruling in Griswold v. Connecticut (1965), that the Constitution protects a right to privacy within marriage that includes the decision to use artificial birth control.