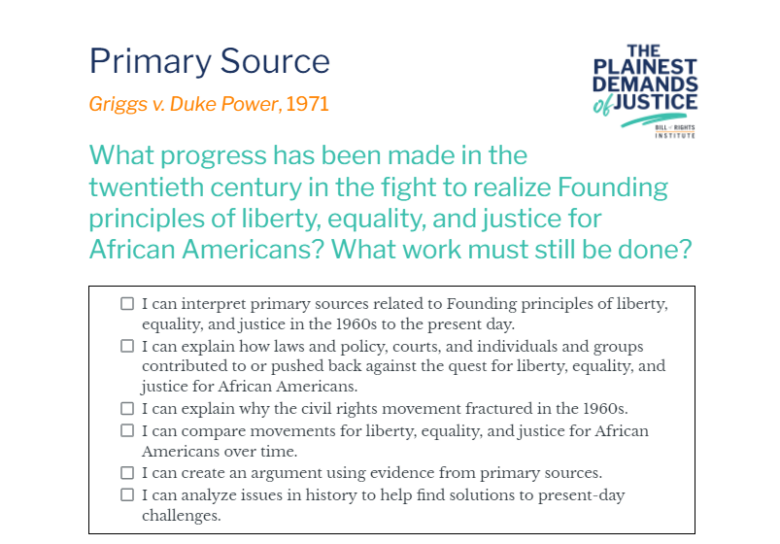 Duke Power, a power plant located in Eden, North Carolina, was accused of discriminating against African Americans by requiring employees to have a high school diploma and pass general aptitude tests before advancing or transferring within the company. Because of Jim Crow laws, many African Americans in North Carolina had received a poor education and did not complete high school.

Willie Griggs and other employees sued Duke Power for violating the Civil Rights Act of 1964. The workers argued that the tests and diploma requirement were a way for the company to discriminate against African Americans. Duke countered that the requirements were meant to increase the overall quality of the workplace, not to discriminate on the basis of race. Both the lower courts ruled in favor of Duke Power. The unanimous decision of the Supreme Court was written by Chief Justice Burger.

We granted the writ in this case to resolve the question whether an employer is prohibited by the Civil Rights Act of 1964, Title VII, from requiring a high school education or passing of a standardized general intelligence test as a condition of employment in or transfer to jobs when (a) neither standard is shown to be significantly related to successful job performance, (b) both requirements operate to disqualify Negroes at a substantially higher rate than white applicants, and (c) the jobs in question formerly had been filled only by white employees as part of a longstanding practice of giving preference to whites.

The objective of Congress in the enactment of Title VII [of the Civil Rights Act of 1964] is plain from the language of the statute. It was to achieve equality of employment opportunities and remove barriers that have operated in the past to favor an identifiable group of white employees over other employees. Under the Act, practices, procedures, or tests neutral on their face, and even neutral in terms of intent, cannot be maintained if they operate to “freeze” the status quo of prior discriminatory employment practices.

Nothing in the Act precludes the use of testing or measuring procedures; obviously they are useful. What Congress has forbidden is giving these devices and mechanisms controlling force unless they are demonstrably a reasonable measure of job performance. . . . What Congress has commanded is that any tests used must measure the person for the job, and not the person in the abstract.

The judgment of the Court of Appeals is, as to that portion of the judgment appealed from, reversed.