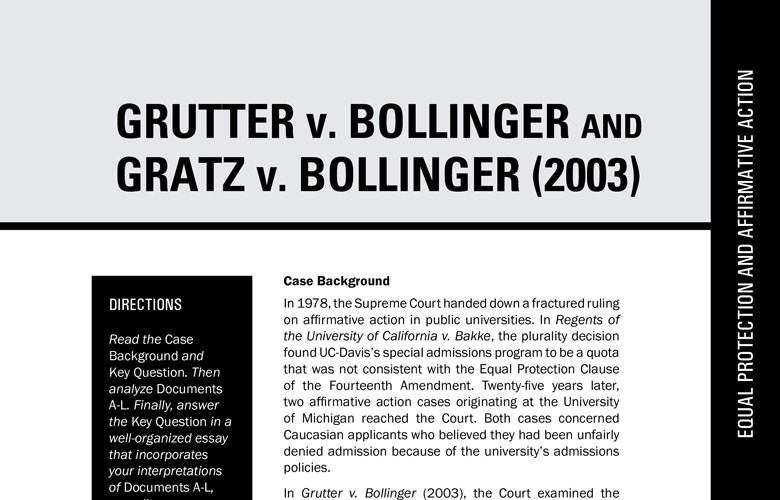 Read the Case Background and Key Question. Then analyze Documents A-L. Finally, answer the Key Question in a well-organized essay that incorporates your interpretations of Documents A-L, as well as your own knowledge of history.

In 1978, the Supreme Court handed down a fractured ruling on affirmative action in public universities. In Regents of the University of California v. Bakke, the plurality decision found UC-Davis’s special admissions program to be a quota that was not consistent with the Equal Protection Clause of the Fourteenth Amendment. Twenty-five years later, two affirmative action cases originating at the University of Michigan reached the Court. Both cases concerned Caucasian applicants who believed they had been unfairly denied admission because of the university’s admissions policies.

In Grutter v. Bollinger (2003), the Court examined the university’s Law School program, which sought to admit a “critical mass” of minority students. The second case, Gratz v. Bollinger, concerned the admissions policy of the University’s Literature, Science and Arts School (LSA). This admissions program automatically awarded 20 points out of the 100 necessary for acceptance to members of minority groups. The legal reasoning for affirmative action in the two Michigan cases was partially different from the reasoning in Bakke. Affirmative action began as a way of compensating groups for unjust discrimination they had suffered. By 2003, the University of Michigan based its reasoning on promoting diversity.