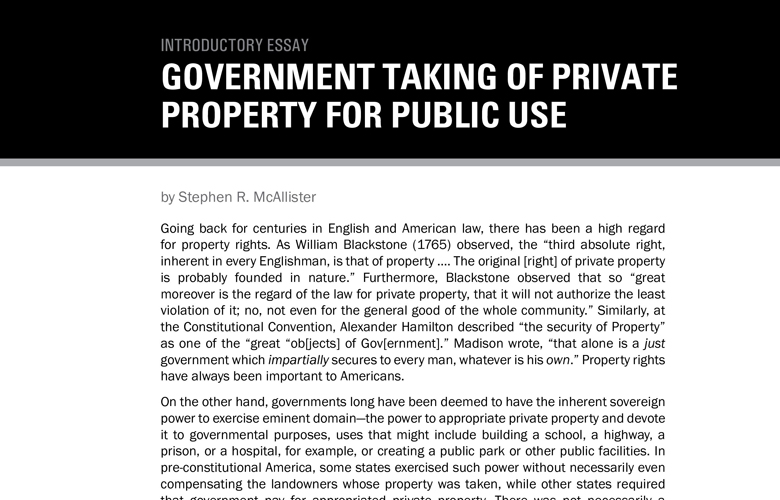 Going back for centuries in English and American law, there has been a high regard for property rights. As William Blackstone (1765) observed, the “third absolute right, inherent in every Englishman, is that of property …. The original [right] of private property is probably founded in nature.” Furthermore, Blackstone observed that so “great moreover is the regard of the law for private property, that it will not authorize the least violation of it; no, not even for the general good of the whole community.” Similarly, at the Constitutional Convention, Alexander Hamilton described “the security of Property” as one of the “great “ob[jects] of Gov[ernment].” Madison wrote, “that alone is a just government which impartially secures to every man, whatever is his own.” Property rights have always been important to Americans.

On the other hand, governments long have been deemed to have the inherent sovereign power to exercise eminent domain—the power to appropriate private property and devote it to governmental purposes, uses that might include building a school, a highway, a prison, or a hospital, for example, or creating a public park or other public facilities. In pre-constitutional America, some states exercised such power without necessarily even compensating the landowners whose property was taken, while other states required that government pay for appropriated private property. There was not necessarily a consensus in America on these questions prior to the ratification of the Constitution and Bill of Rights.

Governments long have been deemed to have the inherent sovereign power to exercise eminent domain.

This unit focuses on two legal issues that have arisen under the Takings Clause, both of which have proven difficult to resolve and sources of public controversy. The question that the first two cases in the unit address is: When, short of government physically occupying or seizing private property, does government regulation of private property amount to a “taking” that implicates the Fifth Amendment’s protections? Commonly referred to as a “regulatory taking” claim, rather than actual physical occupation by the government – the latter of which is treated as a per se taking – answering the question of when the regulation of private property amounts to a “taking” for constitutional purposes is much more difficult than might at first be apparent. As discussed below, the Supreme Court has wrestled with that question for almost 100 years, and has not been able to provide a clear answer or a single test.

Nineteenth century decisions of the Supreme Court took the view that the Takings Clause applied only to a “direct appropriation” of private property, Legal Tender Cases (1871), or at a minimum the functional equivalent of dispossessing a private owner of the property, Transp. Co. v. Chicago (1879). Twentieth century cases continued to recognize that basis for a taking. For example, in United States v. Causby (1946), the Court found a taking that required just compensation when the federal government operated a military airbase next to a farm, with the result that the constant aviation activity significantly interfered with the farmer’s ability to raise chickens (the chickens kept killing themselves by flying into walls when the airplane noise scared them!) and even to live on the property. Another modern example is Loretto v. Teleprompter Manhattan CATV Corp. (1982), in which the Court found a per se taking when the government authorized television cable lines to be run across the rooftops of privately-owned buildings, even though the intrusion was minimal and caused no real interference with use of the properties. The Court emphasized that actual physical occupation of land on a permanent basis by the government, 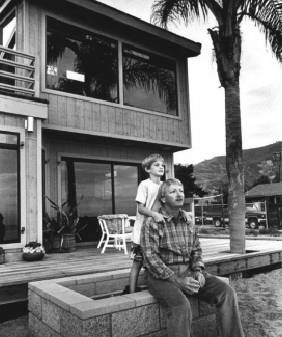 Patrick Nollan and his son in front of their house around the time his case was litigated. Courtesy of Pacific Legal Foundation.

In early cases, the Supreme Court also recognized that governments may regulate the use of private property without being required to pay compensation for a “taking” if the regulation was designed to prevent a serious public harm, such as a use of the property that could cause harm to other citizens, Mugler v. Kansas (1887). A critical turning point under the Takings Clause was the Supreme Court’s decision in Pennsylvania Coal Co. v. Mahon (1922), a case involving a claim by a coal company that government had taken the company’s property by requiring the company to leave pillars of coal in its underground mines in order to lessen the risk that neighboring lands might subside or be adversely affected by nearby coal mines. In Mahon, Justice Holmes argued that government could not have unlimited power to redefine the legal rights of private property owners or else the Takings Clause could be rendered meaningless. Instead, Justice Holmes articulated the now firmly entrenched constitutional principle that “While property may be regulated to a certain extent, if the regulation goes too far it will be recognized as a taking.”

For the past 90 years, the Supreme Court has wrestled with the question of when government regulation of private land has gone “too far.” An important decision in this line of cases is Penn Central Transp. Co. v. New York City (1978), in which the Supreme Court upheld a New York City ordinance that limited the development or alteration of historically significant buildings. When the owners of Penn Central station sought to build a massive multistory building on top of the station and were denied permission by New York they sued, arguing that restricting their ability to develop their property and obtain a return on their investment was a “taking.” The Supreme Court rejected the claim, concluding that in spite of the limitation on development the owners of Penn Central still could use the property in many valuable ways. The Penn Central decision is often noted for the proposition that the Court has no “set formula” for determining when the Mahon line of regulation that “goes too far” has been crossed. Instead, the Court typically has applied an “essentially ad hoc, factual” inquiry.

“While property may be regulated to a certain extent, if the regulation goes too far it will be recognized as a taking.”

Two cases in this unit, Nollan v. California Coastal Comm’n (1987) and Lucas v. South Carolina Coastal Council (1992), illustrate the concept of a “regulatory taking,” and the principles the Supreme Court applies in such cases. In each case, you will see that the government had plausible and legitimate reasons for regulating coastlines, which are necessarily a limited and valuable resource in this country. At the same time, the government regulation had potentially severe effects on the rights and expectations of the citizens who owned and purchased private properties along ocean coastlines.

The second question the unit addresses follows the first: If there is a “taking” for purposes of the Fifth Amendment, is the government devoting the private property to a “public use”? There is no sliding scale under the Fifth Amendment that would, for example, allow government to expand the purposes for which it takes property if government pays more than just compensation. Rather, no matter how much government is willing to pay, the Takings Clause precludes the government from utilizing its power of eminent domain if the taking is not for a “public use.” Thus, the definition of “public use” is an important constitutional question.

In Calder v. Bull (1798), Justice Samuel Chase wrote that it “is against all reason and justice, for a people to entrust a Legislature with” the power to enact “a law that takes property from A. and gives it to B.” For a long time, the “public use” limitation was understood to require that the government actually use the property it was taking, for example to build a road, a school, a hospital, a prison, or other government facilities. No one would seriously question that such purposes are within the meaning of “public use” as used in the Takings Clause.

But what if government takes private property because that property is run down, impoverished, deteriorating, or blighted and the government plans to redevelop the property to more valuable “private” uses? In other words, what if government seeks to transfer lower value properties to private developers who will construct new buildings, perhaps drawing in new business and new residents, as well as increasing the government’s property tax revenues as a consequence of the property becoming more valuable? Ultimately, this question has proven difficult and controversial for the Supreme Court.

The Court first addressed these issues in Berman v. Parker (1954), a case in which the Court upheld a redevelopment plan targeting a blighted area of Washington, D.C. where most of the housing was beyond repair. Part of the plan included the building of new streets, schools and public facilities, but the plan also provided that much of the property would be leased or sold to private parties for redevelopment. The Court unanimously held that the plan involved a “public use” because the plan, as a whole, served public purposes. Then, in Hawaii Housing Authority v. Midkiff (1984), the Court unanimously upheld a Hawaii statute that (with just compensation) redistributed private property among private owners in order to reduce the concentration of land ownership in Hawaii. The Court concluded that the redistribution served a public purpose.

There is no longer unanimity on this question in the Supreme Court, as the third case in this unit demonstrates. In Kelo v. City of New London (2005), a sharply divided Supreme Court concluded that redeveloping a “distressed” municipal neighborhood was a “public use” that justified a city in taking private property and transferring that property to others for redevelopment. Kelo involved a debate between the Justices about the meaning of “public use,” with the majority equating that term with “public purpose,” as did Berman and Midkiff. The dissenters, in sharp contrast, argued that “public use” means just that – the government must “use” the property. Thus, transferring property to other private owners such as developers was not a “public use.” 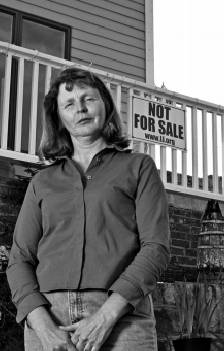 Susette Kelo in front of her little pink house, which was saved and moved to a new location in New London. Photo courtesy of the Institute for Justice.

Kelo provoked strong, negative responses from more than 40 states. Some responses have been statutory, with state legislatures enacting laws to limit the grounds on which government can exercise its power of eminent domain. Other responses have been judicial, with state supreme courts interpreting their state constitutions to adopt a narrower definition of “public use” than the definition the Supreme Court endorsed in Kelo, Berman and Midkiff. The result is that many states provide greater protection to private property owners than the Constitution requires. Notably, as Kelo and the public reaction to the decision make clear, property rights are just as important to Americans today as they were at the Founding.