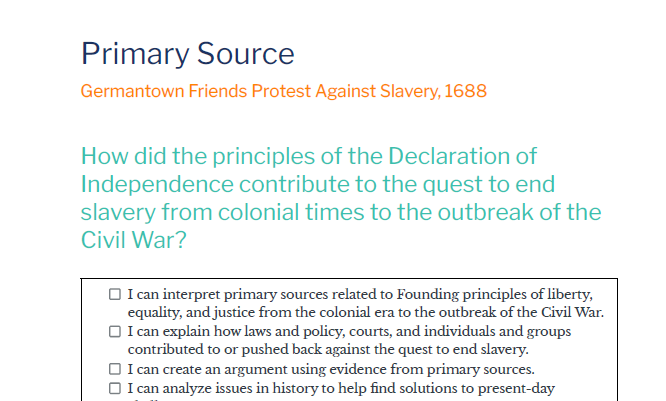 Pennsylvania was established by William Penn in 1681 to provide a refuge for persecuted groups such as the Religious Society of Friends, or Quakers, as they were commonly known. Many Quakers became opponents of slavery because they believed in the equality of all men and women. In 1688, a young German Quaker of the Germantown Friends drafted an anti-slavery petition to be discussed at any upcoming Quaker meeting in a nearby town. The petition was signed by three others living in Germantown (now part of Philadelphia). In his argument against the evils of slavery, the author referenced the Bible to support the natural liberty of all humans.

These are the reasons why we are against the traffic of men-body, as follows. Is there any that would be done or handled at this manner? viz. [that is to say], to be sold or made a slave for all the time of his life? Now, though they are black, we can not conceive there is more liberty to have them slaves, as it is to have other white ones. There is a saying, that we shall do to all men like as we will be done ourselves; making no difference of what generation, descent or color they are. And those who steal or rob men, and those who buy or purchase them, are they not all alike? Being now this is not done in the manner we would be done at therefore we contradict and are against this traffic of men-body [slave trade]. And we who profess that it is not lawful to steal, must, likewise, avoid to purchase such things as are stolen, but rather help to stop this robbing and stealing if possible. And such men ought to be delivered out of the hands of the robbers, and set free as well as in Europe.