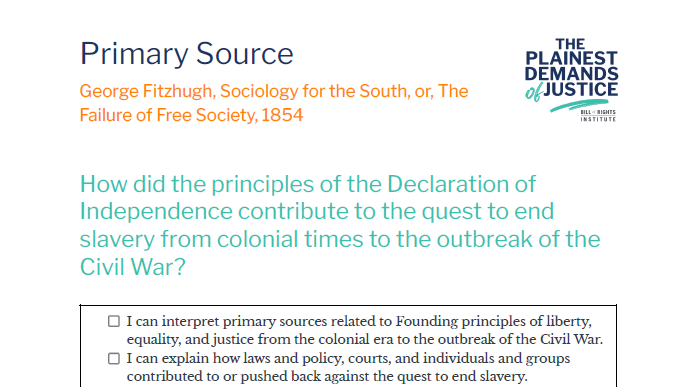 Seventeen years after John C. Calhoun referred to slavery as “a positive good,” the Virginian George Fitzhugh defended slavery by comparing it with the free labor system of the North. Fitzhugh contrasted what he believed was the paternalistic benevolence of slavery and southern culture favorably with that of free laborers working for low wages in dangerous northern factories.

Sociology for the South, or, The Failure of Free Society

. . . There is no rivalry, no competition to get employment among slaves, as among free laborers. Nor is there a war between master and slave. The master’s interest prevents his reducing the slave’s allowance or wages in infancy or sickness, for he might lose the slave by so doing. His feeling for his slave never permits him to stint him in old age. The slaves are all well fed, well clad, have plenty of fuel, and are happy. They have no dread of the future – no fear of want. A state of dependence is the only condition in which reciprocal affection can exist among human beings – the only situation in which the war of competition ceases, and peace, amity and good will arise. A state of independence always begets more or less of jealous rivalry and hostility. A man loves his children because they are weak, helpless and dependent; . . . slaves are always dependent, never the rivals of their master. Hence… we never saw one who did not like his slaves, and rarely a slave who was not devoted to his master . . . The institution of slavery gives full development and full play to the affections. Free society chills, stints and eradicates them. In a homely way the farm will support all, and we are not in a hurry to send our children into the world, to push their way and make their fortunes. . . .We are better husbands, better fathers, better friends, and better neighbors than our Northern brethren. . . .