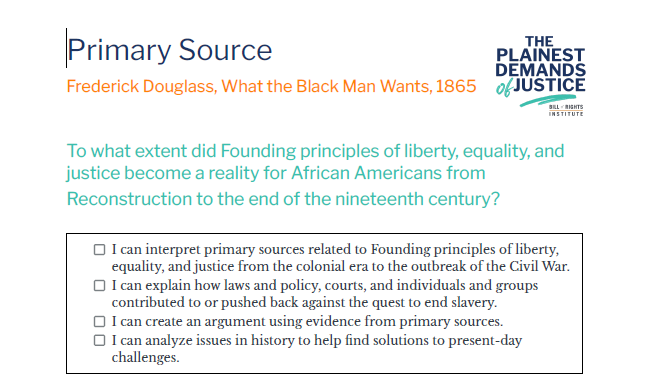 After the passage of the Thirteenth Amendment, which banned slavery forever in the United States, abolitionists rejoiced that permanent emancipation had finally been achieved after decades of struggle. In May 1865, William Lloyd Garrison and his followers wanted to disband the American Anti-Slavery Society, but were outvoted by a large group who wanted to continue the fight for Black civil rights. Black abolitionist Frederick Douglass argued that suffrage was the “keystone to the arch of human liberty,” and the “one idea” upon which all civil rights and political consent for just and equal laws rested. Douglass advocated for voting rights for all adults but saw the extension of the vote to Black men as a provisional step in the design to secure votes for women. He gave the following speech at the Annual Meeting of the Massachusetts Anti-Slavery Society shortly before the end of the Civil War.

It may be asked, “Why do you want it? Some men have got along very well without it. Women have not this right.” Shall we justify one wrong by another? This is the sufficient answer. Shall we at this moment justify the deprivation of the Negro of the right to vote, because some one else is deprived of that privilege? I hold that women, as well as men, have the right to vote, and my heart and voice go with the movement to extend suffrage to woman; but that question rests upon another basis than which our right rests. We may be asked, I say, why we want it. I will tell you why we want it. We want it because it is our right, first of all. No class of men can, without insulting their own nature, be content with any deprivation of their rights. We want it again, as a means for educating our race. . . . By depriving us of suffrage, you affirm our incapacity to form an intelligent judgment respecting public men and public measures; you declare before the world that we are unfit to exercise the elective franchise [the right to vote], and by this means lead us to undervalue ourselves, to put a low estimate upon ourselves, and to feel that we have no possibilities like other men.

What I ask for the Negro is not benevolence [kindness], not pity, not sympathy, but simply justice.