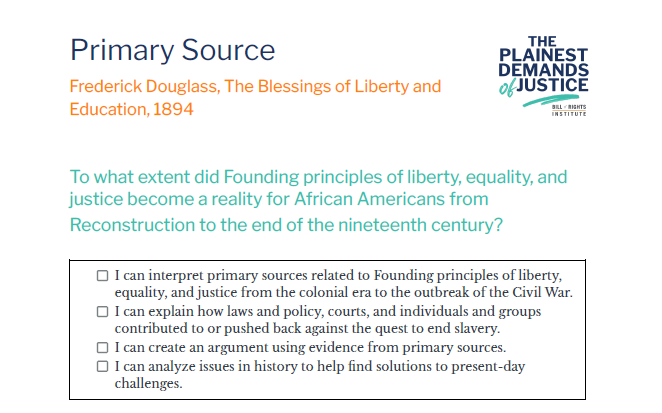 Near the end of his life, Frederick Douglass grappled with the fact that Black Americans were economically unequal and lacked the same opportunities for social mobility as white Americans. Douglass believed that individuals could rise with equal opportunity, education, hard work, and good character. However, he also believed that the legacy of slavery impeded equal opportunity for Black Americans and argued that the federal government should provide aid for education. Douglass gave the following speech at a dedication of a school for African Americans in Manassas, Virginia. In it, he shared his continued belief in the Founding principle of liberty, equality, and justice.

Frederick Douglass, The Blessings of Liberty and Education, 1894

It is sometimes said that we have done enough for the negro; that we have given him his liberty and we should now let him do for himself. This sounds well, but that is all. I do not undervalue freedom from chattel slavery. It was a great and glorious triumph of justice and humanity. . . . But let us look at this emancipation and see where it left the negro, and we shall see how far it falls short of the plainest demands of justice and of what we owe the negro. . . .

I have no hesitation in telling you that I think the colored people and their friends make a great mistake in saying so much of race and color. I know no such basis for the claims of justice . . . I do now and always have attached more importance to manhood than to mere kinship or identity with any variety of the human family. RACE, in the popular sense, is narrow; humanity is broad. The one is special; the other is universal. The one is transient; the other permanent. . . . Man is broad enough and high enough as a platform for you and me and all of us. The colored people of this country should advance to the high position of the Constitution of the country. The Constitution makes no distinction on account of race or color, and they should make none.

I would place myself, and I would place you, my young friends, upon grounds vastly higher and broader than any founded upon race or color. Neither law, learning, nor religion, is addressed to any man’s color or race. Science, education, the Word of God, and all the virtues known among men, are recommended to us, not as races, but as men . . . It was not the race or the color of the negro that won for him the battle of liberty. That great battle was won, not because the victim of slavery was a negro, mulatto, or an Afro-American, but because the victim of slavery was a man and a brother to all other men, a child of God, and could claim with all mankind a common Father, and therefore should be recognized as an accountable being, a subject of government, and entitled to justice, liberty and equality before the law, and every where else. Man saw that he had a right to liberty, to education, and to an equal chance with all other men in the common race of life and in the pursuit of happiness.

Hence, at the risk of being deficient in the quality of love and loyalty to race and color, I confess that in my advocacy of the colored man’s cause, whether in the name of education or freedom, I have had more to say of manhood and of what is comprehended in manhood and in womanhood, than of the mere accident of race and color; and, if this is disloyalty to race and color, I am guilty . . . that to be black or white is neither a proper source of pride or of shame. I go further, and declare that no man’s devotion to the cause of justice, liberty, and humanity, is to be weighed, measured and determined by his color or race.

You want to know whether the hour is one of hope or despair. . . . I think the situation is serious, but it is not hopeless. On the contrary, there are many encouraging signs in the moral skies. I have seen many dark hours and yet have never despaired of the colored man’s future. . . . The light of education is shedding its beams more brightly.