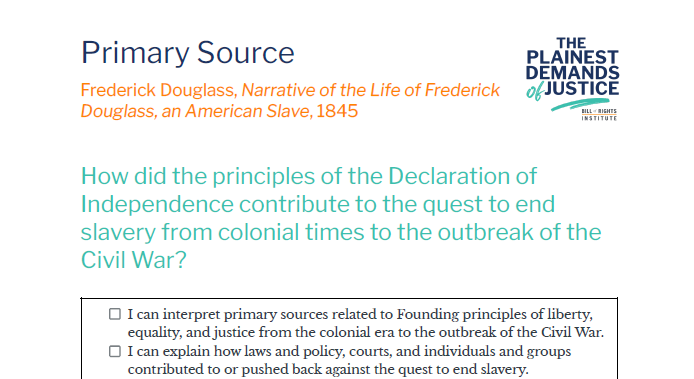 Slave narratives, autobiographical accounts of enslaved Africans, served the cause of abolition by visualizing the experience of slavery in a way easily understood by those far removed from plantation life. The best known of the slave narratives was that of the abolitionist Frederick Douglass. This narrative, published in 1845, was the first of three autobiographies Douglass wrote. In this passage, he describes a turning point in his life after a violent fight with a “slavebreaker” named Mr. Covey.

Narrative of the Life of Frederick Douglass, an American Slave, 1845

Mr. Covey succeeded in breaking me. I was broken in body, soul, and spirit. My natural elasticity was crushed, my intellect languished, the disposition to read departed, the cheerful spark that lingered about my eye died; the dark night of slavery closed in upon me; and behold a man transformed into a brute! . . .

Mr. Covey entered the stable with a long rope; and just as I was half out of the loft, he caught hold of my legs, and was about tying me. As soon as I found what he was up to, I gave a sudden spring, and as I did so, he holding to my legs, I was brought sprawling on the stable floor. Mr. Covey seemed now to think he had me, and could do what he pleased; but at this moment—from whence came the spirit I don’t know—I resolved to fight; and, suiting my action to the resolution, I seized Covey hard by the throat; and as I did so, I rose. He held on to me, and I to him.. . . .

We were at it for nearly two hours. Covey at length let me go, puffing and blowing at a great rate, saying that if I had not resisted, he would not have whipped me half so much. The truth was, that he had not whipped me at all. I considered him as getting entirely the worst end of the bargain; for he had drawn no blood from me, but I had from him. The whole six months afterwards, that I spent with Mr. Covey, he never laid the weight of his finger upon me in anger. He would occasionally say, he didn’t want to get hold of me again. “No,” thought I, “you need not; for you will come off worse than you did before.”

This battle with Mr. Covey was the turning-point in my career as a slave. It rekindled the few expiring embers of freedom, and revived within me a sense of my own manhood. It recalled the departed self-confidence, and inspired me again with a determination to be free. . . . My long-crushed spirit rose, cowardice departed, bold defiance took its place; and I now resolved that, however long I might remain a slave in form, the day had passed forever when I could be a slave in fact. I did not hesitate to let it be known of me, that the white man who expected to succeed in whipping, must also succeed in killing me.