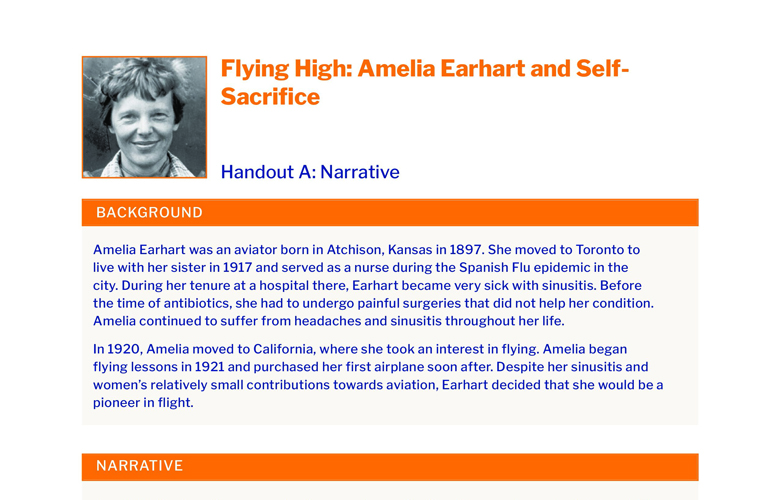 Amelia Earhart was an aviator born in Atchison, Kansas in 1897. She moved to Toronto to live with her sister in 1917 and served as a nurse during the Spanish Flu epidemic in the city. During her tenure at a hospital there, Earhart became very sick with sinusitis. Before the time of antibiotics, she had to undergo painful surgeries that did not help her condition. Amelia continued to suffer from headaches and sinusitis throughout her life.

In 1920, Amelia moved to California, where she took an interest in flying. Amelia began flying lessons in 1921 and purchased her first airplane soon after. Despite her sinusitis and women’s relatively small contributions towards aviation, Earhart decided that she would be a pioneer in flight.

Amelia Earhart was known as a tomboy growing up. She loved to run, play, and get dirty outside with her younger sister. Despite many setbacks in her life, she continued to be adventurous and tenacious. Amelia’s father was a successful claims officer at a railroad company, but when his alcohol problems were discovered, he was forced to retire. The family had to auction off their home and some of their belongings. In 1915, Mrs. Earhart moved her daughters to Chicago, where Amelia took an interest in science. Amelia graduated from high school and then served as a nurse in Toronto before moving to California.

In 1920, Amelia’s adventurous spirit was gratified when she took her first plane ride at a Long Beach, California air show. She was hooked! She saved her money for flying lessons, cut her hair short like other female aviators, and purchased a leather jacket to wear when flying. She also bought her own plane called “The Canary” due to its bright yellow paint. Even before she officially received her pilot’s license, Amelia became the first female pilot to fly a plane to 14,000 feet altitude. At the time, flying was still a new technology, and every pilot understood that they could be seriously injured or even die in a plane accident.

Soon after her great feat, Amelia learned that her family was once again struggling for money. She decided to sacrifice her love for flying and sold her plane. However, she could not stay away from aviation. Earhart joined the American Aeronautical Society in Boston and became the first female to travel across the Atlantic on a plane—she was only a passenger on the trip, but with it, she became a household name.

After her cross-Atlantic flight, Amelia married publisher George Putnam. The new couple worked together to develop a plan to have Amelia conduct a trans-Atlantic flight on her own, much like renowned pilot Charles Lindbergh had done a few years before. In May 1932, Amelia took off from Newfoundland, but she faced some mechanical problems toward the end of the trip and was forced to land in Northern Ireland instead of in Paris like Lindbergh. Despite the setback, Amelia received the National Geographic Society’s Gold Medal from President Herbert Hoover, the Distinguished Flying Cross from the United States Congress, and the Cross of the Knight of the Legion of Honor from France.

Earhart continued to set records for speed and distance, including flying solo from California to Hawaii. It was then time to make the next leap in aviation history—Amelia decided she wanted to circumnavigate Earth in her plane. Unlike others who had taken this trip, Earhart wanted to go around the equator, which would make the journey longer. She hired a crew of three men to be her navigators and technical advisors on the flight.

On March 17, 1937, the crew made their first attempt flying from Oakland, California to Hawaii. From there, they planned to head to Australia, India, Africa, and back to North America from the east. Unfortunately, the plane was severely damaged when they tried to take off from Hawaii. Some said a tire blew, while others believed that Amelia had made an error that caused her to lose control.

Amelia was undaunted. She and her husband worked diligently to raise the money for another attempt. Two of her crew members were unable to continue with the journey, so Amelia and her navigator, Fred Noonan, set off on the next effort. Due to changes in weather patterns, Earhart and Noonan had to change their plans and fly east around the globe rather than west. On June 1, 1937, the pair left from Miami, Florida to start their expedition across the world.

From Miami, Amelia and Fred flew to Central America, South America, Africa, and New Guinea. In New Guinea, Amelia became very ill with dysentery, and while she recovered, the plane was made ready for the cross-Pacific flight. Fuel, parachutes, and other essentials were packed in case of any difficulties that may occur.

The plan was to fly from New Guinea to Howland Island, which is located halfway between Australia and Hawaii. Earhart and Noonan made plans to find the small island nestled among the Pacific’s waves. They would use celestial navigation, maps, compasses, the sun, and radio communications with a Coast Guard ship anchored at Howland Island to guide their way. However, problems started even before they left. The pair decided to leave behind radios to make room for more fuel. The maps they had been using were inaccurate and showed Howland Island in the wrong location. Also, navigation by the stars or sun was difficult due to overcast skies.

When they reached the area where they believed the island to be located, Amelia and Fred experienced faulty communication with the Coast Guard ship that was supposed to help them navigate to the island. They were on different radio frequencies and were not using the same time zone. At this point, fuel was running low. The last communication with the plane occurred at 8:43 a.m. on July 3, 1937. Neither Amelia Earhart, Fred Noonan, nor the plane they were flying were seen or heard from again.

The United States Coast Guard and Navy were called in to conduct a $4 million-dollar search over the subsequent weeks. Amelia’s husband financed additional searches to no avail, and Amelia was declared dead in 1939. There are many theories about the disappearance of Amelia and Fred, but none have been substantiated.

Despite the dangers of flying in the early twentieth century, Amelia Earhart was willing to risk her life to go on adventurous journeys across the globe. She knew the possible dangers of her flights, but she believed that by facing the dangers she could help to improve and solidify women’s roles in science, aviation, and other fields. Throughout her life, she followed her passion and strove to distinguish herself as an aviator.