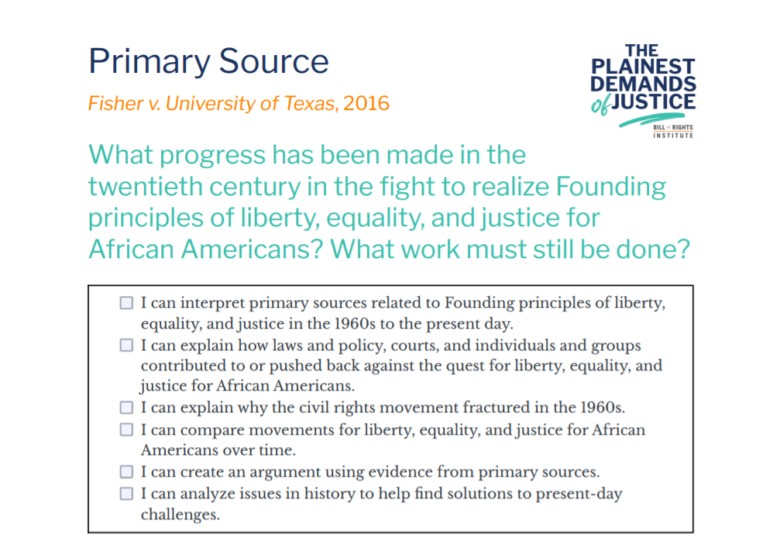 In Fisher v. University of Texas, the court once again took up the question of affirmative action. Abigail Fisher, a white female, was denied entrance to the university, filed suit against it and related defendants, and claimed that its use of race as a consideration in admission decisions violated the Equal Protection Clause of the Fourteenth Amendment. The university argued that its use of race was a narrowly tailored means of pursuing greater diversity. In a 4–3 decision, the court ruled that the use of race as a factor in the holistic review of applicants at a certain point in the admissions process served a compelling state interest and was therefore constitutional.

Justice Kennedy delivered the opinion of the court.

The University of Texas at Austin (or University) relies upon a complex system of admissions that has undergone significant evolution over the past two decades. Until 1996, the University made its admissions decisions primarily based on a measure called “Academic Index” (or AI), which it calculated by combining an applicant’s SAT score and academic performance in high school. In assessing applicants, preference was given to racial minorities . . . .

In striking this sensitive balance, public universities, like the States themselves, can serve as “laboratories for experimentation.” The University of Texas at Austin has a special opportunity to learn and to teach. The University now has at its disposal valuable data about the manner in which different approaches to admissions may foster diversity or instead dilute it. The University must continue to use this data to scrutinize the fairness of its admissions program; to assess whether changing demographics have undermined the need for a race-conscious policy; and to identify the effects, both positive and negative, of the affirmative-action measures it deems necessary.