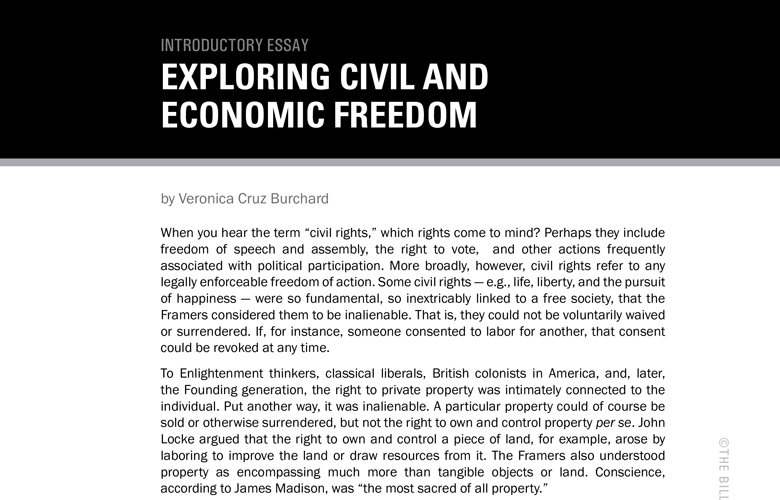 When you hear the term “civil rights,” which rights come to mind? Perhaps they include freedom of speech and assembly, the right to vote, and other actions frequently associated with political participation. More broadly, however, civil rights refer to any legally enforceable freedom of action. Some civil rights—e.g., life, liberty, and the pursuit of happiness—were so fundamental, so inextricably linked to a free society, that the Framers considered them to be inalienable. That is, they could not be voluntarily waived or surrendered. If, for instance, someone consented to labor for another, that consent could be revoked at any time.

To Enlightenment thinkers, classical liberals, British colonists in America, and, later, the Founding generation, the right to private property was intimately connected to the individual. Put another way, it was inalienable. A particular property could of course be sold or otherwise surrendered, but not the right to own and control property per se. John Locke argued that the right to own and control a piece of land, for example, arose by laboring to improve the land or draw resources from it. The Framers also understood property as encompassing much more than tangible objects or land. Conscience, according to James Madison, was “the most sacred of all property.”

Property and its owners, then, were bound together as intimately as individuals and their expressive activities—our freedom of speech, our right to march in protest, our right to cast ballots for our preferred policies and candidates. Our property—our beliefs, our opinions, our faculties, our things—is part of who we are. The ability to freely pursue property in all its forms was considered an essential freedom. It was at the heart of the pursuit of happiness.

While we may define “happiness” today in terms of contentment or even entertainment, to 18th century Americans the idea meant much more. Happiness encompassed the ability to take care of oneself and one’s family, to build wealth and enjoy the fruits of one’s labor. It was attained by living in liberty and by practicing virtue. Understanding the term as the Founders did is key to our understanding of the Declaration’s pronouncement that governments are instituted to protect our inalienable rights to “life, liberty, and the pursuit of happiness.”

Debate Over a Bill of Rights

The Constitution was written with several ends in mind. Listed in the Preamble, they had the multi-generational goal of ensuring “the blessings of liberty to ourselves and our posterity.” The now-familiar constitutional principles such as separation of powers, checks and balances, and our federal system served to limit and divide power in order to prevent tyranny and frustrate excessive government control over individual liberties.

With this purpose and structure in place, the Constitution submitted to the states for approval in 1787 did not contain a bill of rights. The Federalists, who supported the Constitution as written, argued that bills of rights were needed only against kings who wielded unlimited power, but they weren’t necessary for a free, popular government of enumerated powers. As Alexander Hamilton wrote in Federalist 84, “[W]hy declare that things shall not be done which there is no power to do?”

Federalists went even further. Hamilton and Madison argued that the addition of a bill of rights was not only unnecessary, but could even be dangerous. Rights were sacred spaces around sovereign individuals into which government could not justly intrude. Carving out certain secured rights might cause people to think that, but for those few exceptions, other rights were not secured. In short, a bill of rights at the end of the Constitution might result in a massive increase in government power that would turn the very idea of limited government on its head.

Madison’s Promise and the Ninth Amendment

Several states sent lists of proposed amendments to Congress. With the Constitution still in doubt, Madison promised that Congress would take up a bill of rights after ratification. In the summer of 1789, he kept his promise and introduced draft amendments in the House. Mindful of his own warning against identifying a limited list of rights, Madison included what would ultimately become the Ninth Amendment: “The enumeration in the Constitution, of certain rights, shall not be construed to deny or disparage others retained by the people.”

The Ninth Amendment would be a signal that while government powers were few and definite, the rights of naturally-free individuals were indefinite and numerous, even innumerable.

Though maligned in modern times by the late Supreme Court nominee Robert Bork as an “inkblot,” the amendment served in the Founding era, and was intended to serve for all time, as a reminder that the list of individual rights and due process protections in the Bill of Rights was not exhaustive. Madison wrote later in 1792, “As a man is said to have a right to his property, he may be equally said to have a property in his rights.”

The Supreme Court and Liberty

Congress approved twelve amendments and sent them to the states for ratification. Of those 12, the states ratified ten, which became the Bill of Rights in 1791. Because the limits on government applied only at the federal level and the scope of federal power was relatively small, federal lawmaking faced few constitutional challenges for several decades. The states, however, were not subject to the federal Bill of Rights and condoned numerous violations—slavery being the most egregious.

Not until the 14th Amendment, ratified 77 years later in 1868, were the states prevented from making or enforcing “any law which shall abridge the privileges or immunities of citizens of the United States; … deprive any person of life, liberty, or property, without due process of law; [or] deny to any person within its jurisdiction the equal protection of the laws.”

But which rights would be protected from unjust abrogation by state governments? Through a series of cases involving rights ranging from freedom of religion to protection against cruel and unusual punishment, the Supreme Court identified the rights that would be “incorporated,” i.e., applied to limit state power. Generally, the Court asked whether claimed rights were “fundamental,” which depended in turn on whether they were “implicit in the concept of ordered liberty” or “rooted in the traditions and conscience of our people.” Not all rights qualified, and that meant some rights would be less vigorously protected than others.

In cases like Meyer v. Nebraska (1923) and Pierce v. Society of Sisters (1925) the right to liberty was interpreted broadly. Under the 14th Amendment’s Due Process Clause, the Court protected the right to educate one’s children in a private school (Pierce) and the right to teach young children a foreign language (Meyer). Further, the Court held in Meyer, if government wanted to bring about an outcome in society, no matter how noble, it could not go about reaching that goal via unconstitutional means. “That the State may do much, go very far, indeed, in order to improve the quality of its citizens, physically, mentally and morally, is clear; but the individual has certain fundamental rights which must be respected…a desirable end cannot be promoted by prohibited means.”

In Lochner v. New York (1905), the Court struck down a state law limiting the number of hours bakers could work. The Court held that a law of this scope was outside of the legislature’s constitutional power, and that citizens’ liberty included the right to earn an honest living, as well as the right for employers and employees to enter into contracts. This case began what is now called the “Lochner Era” during which the Court interpreted the Due Process Clause of the Fourteenth Amendment as protecting economic rights to the same degree as other personal rights. For this reason, and because the Court’s rulings came into direct conflict with Congress’s attempts to intervene in the marketplace and redistribute wealth, many regard Lochner Era rulings as examples of judicial activism.

The New Deal and the Switch in Time that Saved Nine

After several economic regulations advanced by President Franklin D. Roosevelt’s administration were struck down by the Court’s conservative bloc, Roosevelt proposed the Judicial Procedures Reform Bill of 1937, giving the President the power to appoint a new justice to the high Court for each current justice over the age of 70-1/2. This would have resulted in six new justices at that time. In what is now called “the switch in time that saved nine,” Justice Owen Roberts, who often sided with the conservatives, voted to uphold a Washington state minimum wage law for women. That case, West Coast Hotel v. Parrish (1937) marked the end of the Lochner Era. The new Court majority held that “deprivation of liberty to contract is forbidden by the Constitution if without due process of law, but restraint or regulation of this liberty, if reasonable in relation to its subject and if adopted for the protection of the community against evils menacing the health, safety, morals and welfare of the people, is due process.”

While the Supreme Court had previously treated individual economic freedom as fundamental to “ordered liberty” under the Due Process Clause, after 1937 these rights were to be subordinated. Moreover, another part of the 14th Amendment, the Privileges or Immunities clause, offered no further protection. Decades earlier in the Slaughterhouse Cases (1873), the Court had limited the scope of “privileges or immunities” to activities such as petitioning government, access to navigable waters, and the writ of habeas corpus. Economic rights were not included.

In U.S. v. Carolene Products Company (1938), the Court held that Congress could ban “filled milk” as a health hazard (a charge for which there was no evidence, but which protected large corporate milk producers from smaller competitors selling a lower-cost product). “Filled milk” refers to skim milk to which some form of fat other than milk fat has been added. Often vegetable oil was used. The result resembled cream, but was less expensive. Carolene might have been just another case upholding Congress’s power to regulate economic activity, but a single footnote supplied a rationale for elevating some rights over others.

In Footnote 4, the Court established a hierarchy of rights. In the top tier, entitled to the highest level of protection, are “fundamental” rights such as some of those secured by the first ten amendments to the Constitution, access to key political processes such as voting, and equal treatment of “discrete and insular minorities.” Government restrictions on those rights are rigorously scrutinized to determine their necessity and effectiveness. To be upheld, a restriction must be narrowly tailored to serve a compelling government interest. By contrast, in the bottom tier, are “non-fundamental” economic liberties such as the right to own property and earn an honest living. Government regulation of economic liberties is subject only to a “rational basis” test: The regulation is presumed to be constitutional; the burden is on the citizen to prove it is not; and the regulation will be upheld if it is reasonably related to a legitimate government purpose.

The history of the Court’s treatment of various rights suggests that certain types of activities—the ones we think of today as implicating “civil rights”—receive the greatest constitutional protection. The question whether other rights just as fundamental to our nature have been “den[ied] or disparage[d]” should be the subject of searching inquiry.