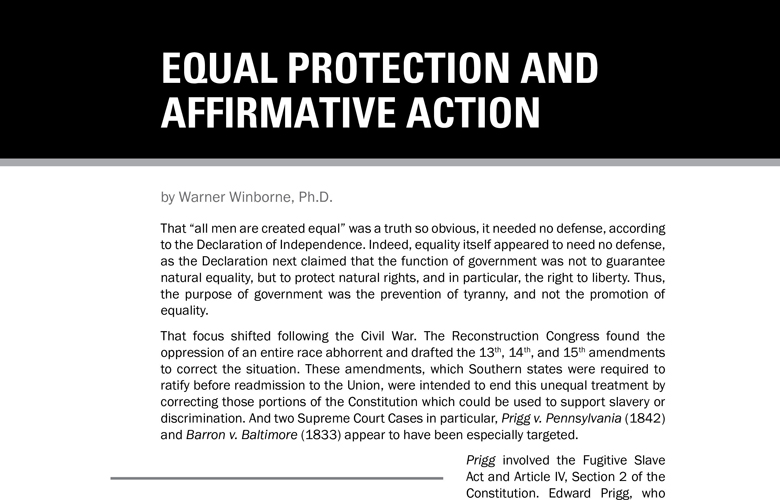 That “all men are created equal” was a truth so obvious, it needed no defense, according to the Declaration of Independence. Indeed, equality itself appeared to need no defense, as the Declaration next claimed that the function of government was not to guarantee natural equality, but to protect natural rights, and in particular, the right to liberty. Thus, the purpose of government was the prevention of tyranny, and not the promotion of equality.

That focus shifted following the Civil War. The Reconstruction Congress found the oppression of an entire race abhorrent and drafted the 13th, 14th, and 15th amendments to correct the situation. These amendments, which Southern states were required to ratify before readmission to the Union, were intended to end this unequal treatment by correcting those portions of the Constitution which could be used to support slavery or discrimination. And two Supreme Court Cases in particular, Prigg v. Pennsylvania (1842) and Barron v. Baltimore (1833) appear to have been especially targeted.

Prigg involved the Fugitive Slave Act and Article IV, Section 2 of the Constitution. Edward Prigg, who captured and returned a fugitive slave to her owner, was arrested and charged with kidnapping. The Court ruled that Article IV, Section 2, the “service or labour” clause, required states to assist in returning fugitive slaves to their owners. But several of the Justices went further, reading in the clause a positive affirmation of the property right of the slave owner to the slave.

According to the Declaration of Independence, the function of government was not to guarantee natural equality, but to protect natural rights. That focus shifted following the Civil War.

Of similar trouble to the Reconstruction Congress was Barron v. Baltimore, which involved not issues of equality, but property (as arguably did Prigg). In Barron, Mr. Barron lost his property and his livelihood because of the actions of the City of Baltimore. He claimed that this constituted a “taking” in violation of his rights guaranteed in the 5th Amendment. The Court agreed that Baltimore’s act amounted to a “taking” but argued that the guarantees contained in the Bill of Rights applied only to national action, not action by the states.

These two cases find their ultimate expression in Dred Scott (1856), the case that affirmed the property rights of slave owners, denied the claims to citizenship and equality of the Negro race, and voided the Missouri Compromise. Although it is grounded in some measure by a most curious understanding of race relations at the Founding, following on the heels of Prigg and Barron, and to some degree bound by stare decisis, the Court defends slavery and denies that the civil liberties enshrined in the Bill of Rights extend to the citizens of the states. That is, following Prigg, slaves are property, not persons, and following Barron, the states are free to deny constitutionally-guaranteed civil rights and civil liberties. It is this which the Civil War Amendments in general and the 14th Amendment in particular, attempted to change. The result is the requirement that the states extend to all citizens of the United States, the “equal protection of the laws.”

But this is perhaps easier said than done. The Founders either took human equality for granted, or believed that government need not enforce equality. But with the adoption of the 14th Amendment which requires the equal protection of the laws, it was the task of government, especially the Court, to determine just what “equal protection of the laws” required. Unsurprisingly, the Court interpreted the Equal Protection Clause as a group of lawyers might; what was protected, they said, was legal and political equality, not social or economic equality.

In Plessy v. Ferguson (1896), the Court determined that separate accommodations for the races are constitutionally permissible. The Equal Protection Clause does not require the intermingling of the races, merely their equal treatment under the law. Indeed, the Court suggested that legislation requiring integration was likely to fail, and that racism could only be eradicated by the slow and informal process of voluntary social interaction. The Court found the claim that segregation imposes a stigma on the excluded race without merit, as such a stigma is the result of that race’s assumptions regarding the purpose of the segregation. 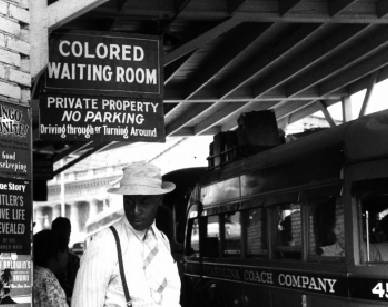 But it was not until 1954 that the Equal Protection Clause was extended beyond the legal and political realms to social and economic activity. In Brown v. Board of Education, the Court found persuasive the claim raised in Plessy that segregation necessarily stigmatized the excluded race, and that therefore, separate conditions could never be equal. A unanimous Court ordered the end of de jure segregation in education, finding, “We conclude that in the field of public education the doctrine of ‘separate but equal’ has no place. Separate educational facilities are inherently unequal. Therefore, we hold that the plaintiffs and others similarly situated for whom the actions have been brought are, by reason of the segregation complained of, deprived of the equal protection of the laws guaranteed by the Fourteenth Amendment.”

In its interpretation of the Equal Protection Clause, the Court developed a doctrine of “suspect classifications” which, if involved in the policy at issue, would trigger “strict scrutiny.” In University of California Regents v. Bakke, Justice Powell, writing for a divided Court, employed the doctrine of suspect classifications to find a policy setting aside seats for minority students violated the Equal Protection Clause. He noted that suspect classifications had not been reserved only for those in minority positions. “Nor has this Court held that discreteness and insularity constitute necessary preconditions to a holding that a particular classification is invidious. …These characteristics may be relevant in deciding whether or not to add new types of classifications to the list of “suspect” categories or whether a particular classification survives close examination. Racial and ethnic classifications, however, are subject to stringent examination without regard to these additional characteristics.” Thus, the Equal Protection Clause protects against reverse discrimination as well as discrimination against minorities. Nevertheless, Justice Powell also concluded that although racial quotas could not be established, race could be considered as a factor in admissions since a diverse student body was a compelling interest.

Dr. Warner Winborne is Assistant Professor of Political Science at Hampden-Sydney College in Virginia, where his particular areas of interest include Aristotle, Adam Smith, and Thomas Hobbes. The Executive Director for the Center for the Study of the Constitution, he specializes in the Fourth, Ninth, and Fourteenth Amendments. He has presented papers at the Midwest Political Science Association’s annual conferences, chaired a roundtable discussion of Lani Guinier’s and Gerald Torres’ The Miner’s Canary at the American Political Science Association conference, and is the author of Modernization and Modernity: Thomas Hobbes, Adam Smith and Political Development.