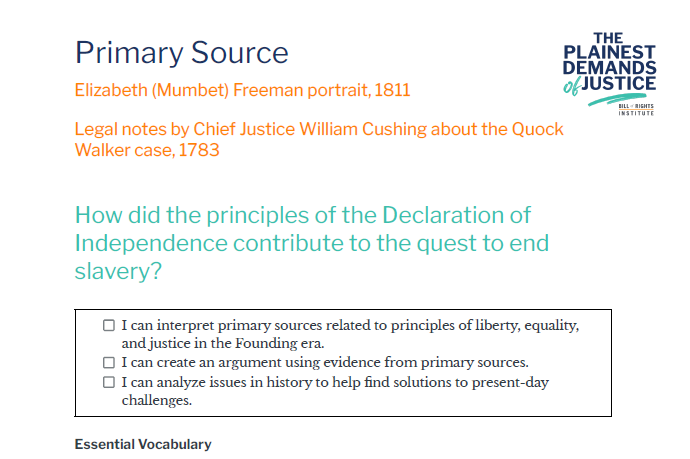 Enslaved individuals were inspired by the talk of independence and natural rights circulating throughout the colonies in 1776. Several used the language of these principles to sue for their own freedom, such as Elizabeth (Mumbet) Freeman and Quock Walker. Sources written by Freeman and Walker themselves are lost to history, so historians must use other clues to consider the implications of their decisions to sue for freedom.

As is the case for many born into a life of slavery, we know little about their early lives. In 1746, Freeman became the property of a wealthy Sheffield, Massachusetts, resident named John Ashley. With the help of a local abolitionist, Freeman brought her case to court and was granted her freedom and 30 shillings in damages in 1781. She then became a paid domestic servant for the Sedgewick family. Before her death in 1829, she was able to purchase a small home of her own. This miniature portrait of Freeman was done by a member of the Sedgewick family. Miniature portraits were very small and meant to keep the subject’s likeness, typically a loved one, nearby.

Like Freeman, Quock Walker used the courts to challenge his status as a slave. The document below comes from the notes of Chief Justice William Cushing who heard Walker’s case in the Massachusetts Supreme Court. 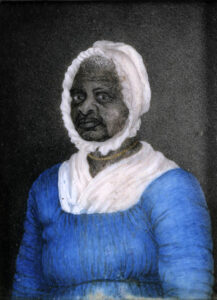 … our Constitution of Govmt, by which the people of this Commonwealth have solemnly bound themselves, Sets out with declaring that all men are born free & equal — & that. Every subject is entitled to Liberty, & to have it guarded by the Laws, as well as Life & property — & in short is totally repugnant [offensive] to the Idea of being born Slaves. This being the Case I think the Idea of Slavery is inconsistent with our own conduct & Constitution & there can be no such thing as perpetual servitude of a rational Creature …