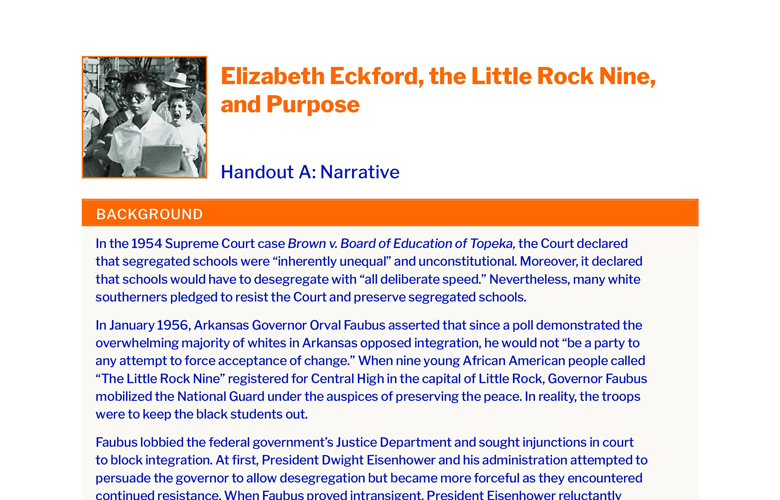 In January 1956, Arkansas Governor Orval Faubus asserted that since a poll demonstrated the overwhelming majority of whites in Arkansas opposed integration, he would not “be a party to any attempt to force acceptance of change.” When nine young African American people called “The Little Rock Nine” registered for Central High in the capital of Little Rock, Governor Faubus mobilized the National Guard under the auspices of preserving the peace. In reality, the troops were to keep the black students out.

Faubus lobbied the federal government’s Justice Department and sought injunctions in court to block integration. At first, President Dwight Eisenhower and his administration attempted to persuade the governor to allow desegregation but became more forceful as they encountered continued resistance. When Faubus proved intransigent, President Eisenhower reluctantly federalized the state’s National Guard and sent in troops to protect the Little Rock Nine.

Eight of the nine black students finished the year. Faubus closed the Little Rock public schools the following year to prevent continued integration. Nevertheless, the schools re-opened in 1959 and were integrated. Faubus could not stop the quest for equality and justice. The strength of purpose in the characters of young people like Elizabeth Eckford, who would not be diverted in their stand to earn the right to an equal education, ultimately prevailed.

The morning of September 3, 1957, was an extremely tense time for fifteen-year-old Elizabeth Eckford. The first day of school should have been an exciting moment for the young woman, who was picking out her favorite dress to wear and hoping that she might make friends at her new school. However, Eckford was one of the Little Rock Nine, a small group of black students who had volunteered to integrate Central High School in Little Rock, Arkansas. She anxiously awaited with the other African-American students and their families to hear if they would be allowed to go to school. Finally, they complied with the school boards wish that they stay away and try the next day. Eckford would have a fretful night of sleep as whites who opposed integration drove by her home at night honking horns and yelling racial slurs. One of the Little Rock Nine had had a rock thrown through her window a few nights before with a note that read, “Stone this time. Dynamite next.”

The following day, Daisy Bates, the president of the Arkansas state chapter of the NAACP− who was helping the families in their struggle−made several telephone calls to the families. She had arranged for the children to meet the police at a pre-arranged location and ride the police cars safely to school. The only problem was the Eckford family did not have a phone and was forgotten.

Eckford wore a pretty black-and-white pressed dress as she had breakfast and gathered her things for school. Her parents, however, listened to the controversy on the television news and grew increasingly nervous about their daughter’s safety. Elizabeth tried to reassure and calm them. She then went to the public bus stop and headed to Central High.

When Eckford arrived at Central High School, she saw a wild scene of a mob of whites filling the surrounding streets and grounds. She was alone and nervous as she passed the angry,
shouting whites. Eckford knew her purpose and pressed on, placing her faith in the presence of
the Arkansas National Guard that she assumed was there to protect her. As she walked toward the main entrance she encountered the guards who, instead of protecting her, blocked her way and pointed to another entrance. The crowd followed and menaced her, calling her names. She became increasingly terrified and then shocked when more guards blocked her way—this time
with bayonets. Confused and afraid, she walked quickly away from the school, unsure of where
she was going. She became even more frightened when someone in the crowd screamed “Lynch her! Lynch her!” Meanwhile, Daisy Bates heard of Elizabeth’s plight on the car radio and sped toward the school.

Elizabeth tried to find a friendly face in the crowd, and instead an old woman spit in her face. The mob continued to call her names and warned her to “get out of here.” A person yelled, “Drag her over to a tree!” raising the specter of a lynching. With her knees shaking, Elizabeth sought refuge on a bus stop bench. A New York Times reporter tried to comfort her and bolster her courage by raising her chin with his finger and encouraging her, “Don’t let them see you cry.” A kind white woman tried to usher her into a drug store to call a cab, but a member of the crowd reached in and slammed the door in their faces. Finally, the pair spotted a bus, darted to it, and quickly climbed aboard. Elizabeth Eckford had endured a horrific test of her courage and purpose. It remained to be seen whether she would have the strength of will to return to school after such an ordeal.

After tense weeks of negotiations between national and state authorities, the Little Rock Nine
returned to school, but nervous school officials, fearing violence, immediately forced them to
go home. Indeed, that day, several newspaper reporters were assaulted, including one who was
knocked unconscious by a brick. On September 24, President Dwight Eisenhower federalized the Arkansas National Guard, placing it under his direct authority. He also dispatched more than a
thousand troops of the 101st Airborne to protect the Little Rock Nine.

The three boys and six girls finally attended school with the feeling of security needed to spend the day learning alongside white students. The federal troops drove them to school in armed jeeps and worked with local police to drive off the mob. They also provided a personal bodyguard for Elizabeth and the other eight students. Several white students came around and treated the new students with more respect than anticipated. With relative peace restored, the troops left a week later, though the name-calling, tripping, shoving, and threats persisted.

Only a few weeks later, Elizabeth’s strength flagged, and she wanted to quit. She went to the Vice Principal Elizabeth Huckaby’s office with tears falling down her cheeks and her handkerchief balled up in a wet mess. “I want to go home,” she explained, and told of several incidents she suffered. Huckaby helped calm Elizabeth down and strengthened her resolve to bear up under the strain. They walked back to history class, and Elizabeth had a renewed sense of purpose in the crisis.

She and the Little Rock Nine would be continually challenged by racial taunts. One of the members of the group, Minniejean Brown, cracked under the pressure. Taught not to respond because it would damage their cause, Minniejean dumped a bowl of chili on an annoying white student’s head and was promptly suspended. When victimized by a racial slur, she responded in
kind and was finally expelled. Some white students carried cards that proudly read, “One down,
eight to go.”

Elizabeth completed the year, as did Ernest Green, who was the lone graduating member of the remaining Little Rock Nine. He received his diploma without any applause from the white audience, but had achieved a great accomplishment. Though the Little Rock public schools were closed to prevent integration in 1958, they were re-opened in 1959 as integrated schools. Elizabeth Eckford and the Little Rock Nine had started their quest for an equal education and were pushed to the edge of human endurance. Nonetheless, she and the others were strong in their purpose, and their example helped desegregate schools in their city, state, and country.