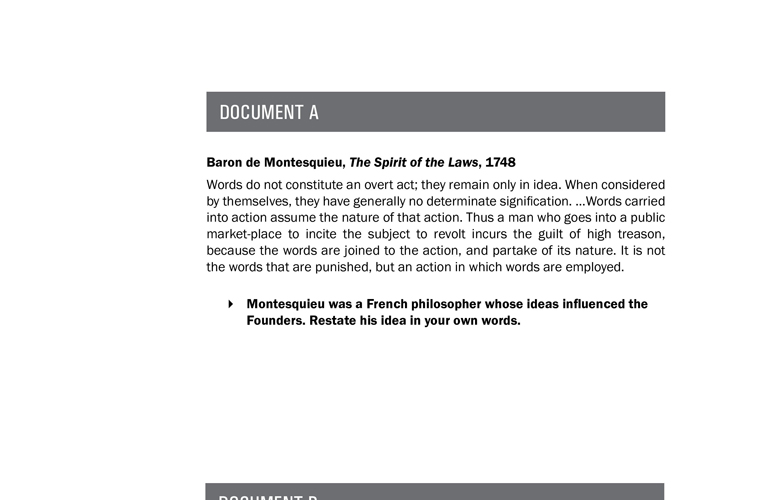 Baron de Montesquieu, The Spirit of the Laws, 1748

Words do not constitute an overt act; they remain only in idea. When considered by themselves, they have generally no determinate signification. …Words carried into action assume the nature of that action. Thus a man who goes into a public market-place to incite the subject to revolt incurs the guilt of high treason, because the words are joined to the action, and partake of its nature. It is not the words that are punished, but an action in which words are employed.

Congress shall make no law … abridging the freedom of speech, or of the press; or the right of the people peaceably to assemble, and to petition the government for a redress of grievances.

If there be any among us who would wish to dissolve this Union or to change its republican form, let them stand undisturbed as monuments of the safety with which error of opinion may be tolerated where reason is left free to combat it.

HATS off!
Along the street there comes
A blare of bugles, a ruffle of drums,
A flash of color beneath the sky:
Hats off!
The flag is passing by!

Blue and crimson and white it shines,
Over the steel-tipped, ordered lines.
Hats off!
The colors before us fly;
But more than the flag is passing by.

Sea-fights and land-fights, grim and great,
Fought to make and to save the State:
Weary marches and sinking ships;
Cheers of victory on dying lips;

Sign of a nation, great and strong
To ward her people from foreign wrong:
Pride and glory and honor,—all
Live in the colors to stand or fall….

[T]he ultimate good desired is better reached by free trade in ideas … the best test of truth is the power of the thought to get itself accepted in the competition of the market…. 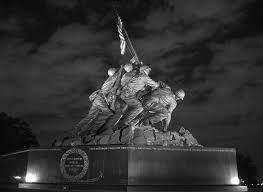 It is … a historical fact that flags, including ours, have played an important and useful role in human affairs. One need not explain fully a phenomenon to recognize its existence and in this case to concede that the flag is an important symbol of nationhood and unity, created by the Nation and endowed with certain attributes…The flag is a national property, and the Nation may regulate those who would make, imitate, sell, possess, or use it.

Note: At his Texas trial, Gregory Johnson made the following statement.

The American flag was burned as Ronald Reagan was being re-nominated as President. And a more powerful statement of symbolic speech, whether you agree with it or not, couldn’t have been made at that time.

The First Amendment literally forbids the abridgment only of “speech,” but we have long recognized that its protection does not end at the spoken or written word.…

The government generally has a freer hand in restricting expressive conduct than it has in restricting the written or spoken word. It may not, however, proscribe particular conduct because it has expressive elements….

Johnson was not … prosecuted for the expression of just any idea; he was prosecuted for his expression of dissatisfaction with the policies of this country, expression situated at the core of our First Amendment values. …If he had burned the flag as a means of disposing of it because it was dirty or torn, he would not have been convicted of flag desecration under this Texas law. …The Texas law is thus not aimed at protecting the physical integrity of the flag in all circumstances, but is designed instead to protect it only against impairments that would cause serious offense to others.

If there is a bedrock principle underlying the First Amendment, it is that the government may not prohibit the expression of an idea simply because society finds the idea itself offensive or disagreeable.…

To conclude that the government may permit designated symbols to be used to communicate only a limited set of messages would be to enter territory having no discernible or defensible boundaries. Could the government, on this theory, prohibit the burning of state flags? Of copies of the Presidential seal? Of the Constitution? In evaluating these choices under the First Amendment, how would we decide which symbols were sufficiently special to warrant this unique status? To do so, we would be forced to consult our own political preferences, and impose them on the citizenry, in the very way that the First Amendment forbids us to do.

[I]t may equally well be said that the public burning of the American flag by Johnson was no essential part of any exposition of ideas … his act … conveyed nothing that could not have been conveyed and was not conveyed just as forcefully in a dozen different ways….

The Texas statute deprived Johnson of only one rather inarticulate symbolic form of protest—a form of protest that was profoundly offensive to many—and left him with a full panoply of other symbols and every conceivable form of verbal expression to express his deep disapproval of national policy. Thus, in no way can it be said that Texas is punishing him because his hearers—or any other group of people—were profoundly opposed to the message that he sought to convey.…

It was Johnson’s use of this particular symbol, and not the idea that he sought to convey by it or by his many other expressions, for which he was punished. …Surely one of the high purposes of a democratic society is to legislate against conduct that is regarded as evil and profoundly offensive to the majority of people—whether it be murder, embezzlement, pollution, or flag burning. 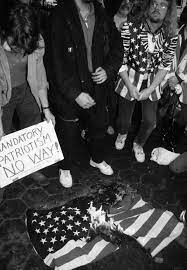 “JUST GUNSMOKE—FOR A MOMENT I THOUGHT SOMEBODY SOMEWHERE MIGHT BE BURNING A FLAG,” 2000 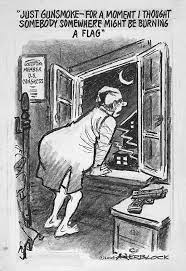 A 2000 Herblock Cartoon, copyright by The Herb Block Foundation 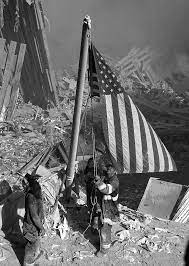 KEY QUESTION: Argue whether or not burning the American flag is so offensive as to be outside the legitimate marketplace of ideas.