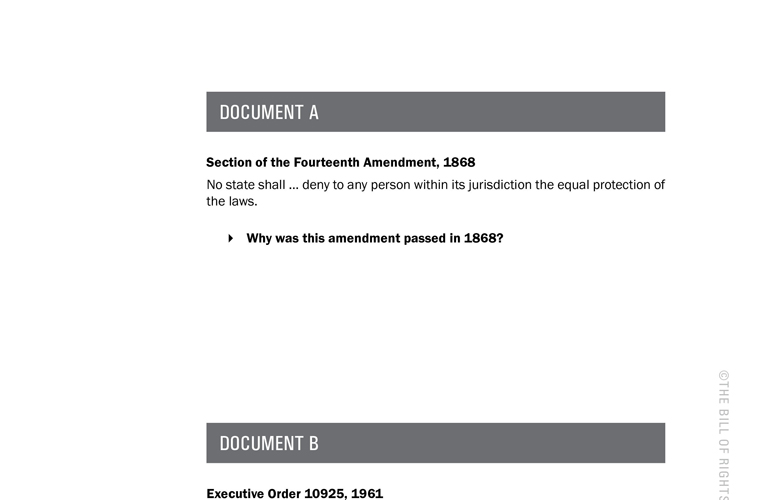 [Federal government contractors] will not discriminate against any employee or applicant for employment because of race, creed, color, or national origin. The contractor will take affirmative action to ensure that applicants are employed, and that employees are treated during employment, without regard to their race, creed, color, or national origin. 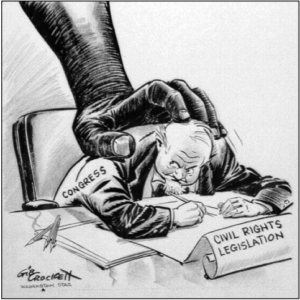 Title VI of the Civil Rights Act of 1964

No person in the United States shall, on the ground of race, color, or national origin, be excluded from participation in, be denied the benefits of, or be subjected to discrimination under any program or activity receiving Federal financial assistance.

You do not wipe away the scars of centuries by saying: “Now, you are free to go where you want, do as you desire, and choose the leaders you please.” You do not take a man who for years has been hobbled by chains, liberate him, bring him to the starting line of a race, saying, “You are free to compete with all the others,” and still justly believe you have been completely fair. …This is the next and more profound stage of the battle for civil rights. We seek not just freedom but opportunity—not just legal equity but human ability—not just equality as a right and a theory, but equality as a fact and as a result. 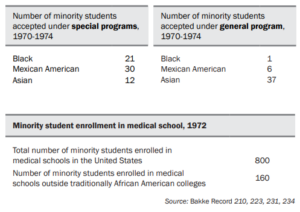 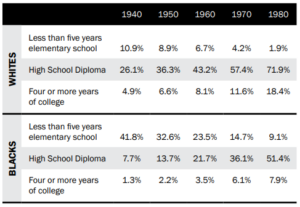 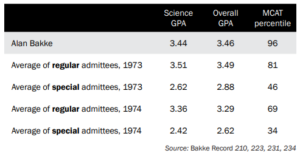 Note: By 1971, Alan Bakke had served four years as a United States Marine, including one tour in Vietnam. He had also completed a Master’s Degree in mechanical engineering, was a father of two, and was 32 years old. When he decided to apply to medical school, he wrote to more than ten medical schools, including UC-Davis, asking about their policy on considering applicants’ ages.

When an applicant is over thirty, his age is a serious factor which must be considered. …The Committee believes that an older applicant must be unusually highly qualified if he is to be seriously considered.…

Colvin [representing Bakke]: Race is an improper classification in this system… we believe it to be unconstitutional.

Justice Burger: Why? Because it is rigidly limited to sixteen [spots set aside in each class for minorities]?

Colvin: No, because the concept of race itself as a classification becomes in our history and in our understanding an unjust and improper basis on which to judge people.

Justice Marshall: Would it be constitutional if it was one [space that was set aside for minority students]?

Colvin: No. Whether it is one, one hundred, two—

Justice Marshall: You are talking about your client [Bakke’s] rights. Don’t these underprivileged people have rights?

Colvin: They certainly have the right to compete—

Marshall: So the numbers are just unimportant?

Colvin: The numbers are unimportant. It is the principle of keeping a man out because of his race that is important.

Note: This memo was circulated while the Justices were considering the case.

The decision in this case depends on whether you consider the action of [UCD Medical School] as admitting certain students or excluding certain other students.

Plurality Decision (5-4), Regents of the University of California v. Bakke, 1978

The guarantees of the Fourteenth Amendment extend to all persons. Its language is explicit. …The guarantee of equal protection cannot mean one thing when applied to one individual and something else when applied to a person of another color. If both are not accorded the same protection, then it is not equal. …Preferring members of any one group for no reason other than race or ethnic origin is discrimination for its own sake….

Hence, the purpose of helping certain groups whom the faculty of the Davis Medical School perceived as victims of “societal discrimination” does not justify a classification that imposes disadvantages upon persons like [Bakke], who bear no responsibility for whatever harm the beneficiaries of the special admissions program are thought to have suffered….

[A] diverse student body … clearly is a constitutionally permissible goal for an institution of higher education. …Ethnic diversity, however, is only one element in a range of factors a university properly may consider in attaining the goal of a heterogeneous student body….

In summary, it is evident that the Davis special admissions program involves the use of an explicit racial classification never before countenanced by this Court. It tells applicants who are not Negro, Asian, or Chicano that they are totally excluded from a specific percentage of the seats in an entering class. No matter how strong their qualifications, quantitative and extracurricular, including their own potential for contribution to educational diversity, they are never afforded the chance to compete with applicants from the preferred groups for the special admissions seats.

In enjoining petitioner [UC-Davis] from ever considering the race of any applicant, however, the courts below failed to recognize that the State has a substantial interest that legitimately may be served by a properly devised admissions program involving the competitive consideration of race and ethnic origin. For this reason, so much of the California court’s judgment as enjoins petitioner from any consideration of the race of any applicant must be reversed.

I agree with the judgment of the Court only insofar as it permits a university to consider the race of an applicant in making admissions decisions. I do not agree that petitioner’s admissions program violates the Constitution. For it must be remembered that, during most of the past 200 years, the Constitution, as interpreted by this Court, did not prohibit the most ingenious and pervasive forms of discrimination against the Negro. Now, when a State acts to remedy the effects of that legacy of discrimination, I cannot believe that this same Constitution stands as a barrier….

The position of the Negro today in America is the tragic but inevitable consequence of centuries of unequal treatment. Measured by any benchmark of comfort or achievement, meaningful equality remains a distant dream for the Negro….

It is because of a legacy of unequal treatment that we now must permit the institutions of this society to give consideration to race in making decisions about who will hold the positions of influence, affluence, and prestige in America. For far too long, the doors to those positions have been shut to Negroes. If we are ever to become a fully integrated society, one in which the color of a person’s skin will not determine the opportunities available to him or her, we must be willing to take steps to open those doors….

KEY QUESTION: Appraise the claim that the University of California at Davis special admissions program resulted in unconstitutional reverse discrimination.