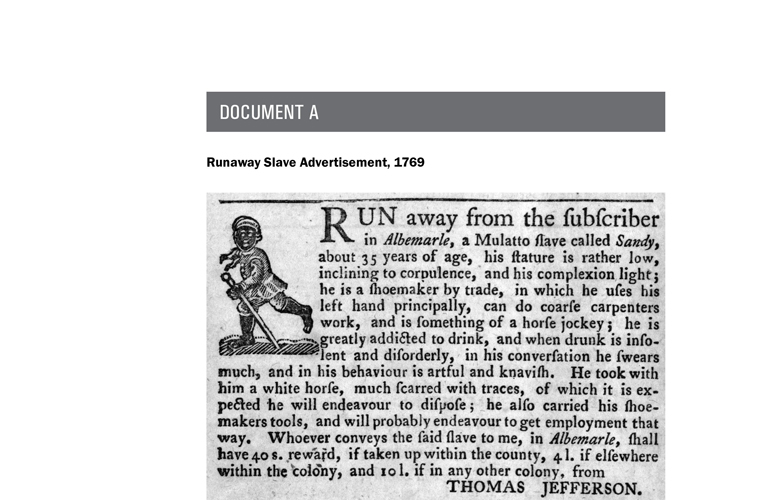 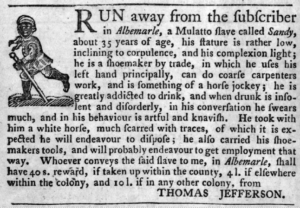 Transcript from the above advertisement:

Run away from the subscriber in Ablemare, a Mulatto slave called Sandy, about 35 years of age, his stature is rather low, inclining to corpulence, and his complexion light; he is a shoemaker by trade, in which he uses his left hand principally, can do course carpenters work, and is something of a horse jockey; he is greatly addicted to drink, and when drunk is insolent and disorderly, in his conversation he swears much, and in his behaviour is artful and knavish. He took with him a white horse, much scarred with traces, of which it is expected he will endeavour to dispose; he also carried his shoemakers tools, and will probably endeavour to get employment that way. Whoever conveys the said slave to me, in Abermarle, shall have 40 s. reward, if taken up within the county, 4 l. if elsewhere within the colony, and 10 l. if in any other colony, from THOMAS JEFFERSON.

The Declaration of Independence, 1776

We hold these truths to be self-evident, that all men are created equal, that they are endowed by their Creator with certain unalienable Rights, that among these are Life, Liberty and the pursuit of Happiness. — That to secure these rights, Governments are instituted among Men, deriving their just powers from the consent of the governed.…

Note: This section of Thomas Jefferson’s original draft Declaration of Independence was deleted by the Continental Congress.

He [the British King] has waged cruel war against human nature itself, violating its most sacred rights of life and liberty in the persons of a distant people who never offended him, captivating & carrying them into slavery in another hemisphere, or to incur miserable death in their transportation thither…Determined to keep open a market where MEN should be bought & sold, he has prostituted his negative for suppressing every legislative attempt to prohibit or to restrain this execrable commerce.

Preamble to the United States Constitution, 1789

We the people of the United States, in order to form a more perfect union, establish justice, insure domestic tranquility, provide for the common defense, promote the general welfare, and secure the blessings of liberty to ourselves and our posterity, do ordain and establish this Constitution for the United States of America.

The migration or importation of such persons as any of the states now existing shall think proper to admit, shall not be prohibited by the Congress prior to the year one thousand eight hundred and eight, but a tax or duty may be imposed on such importation, not exceeding ten dollars for each person.…

The citizens of each state shall be entitled to all privileges and immunities of citizens in the several states.…

[I]n all that territory ceded by France to the United States, under the name of Louisiana, which lies north of thirty-six degrees and thirty minutes north latitude, not included within the limits of the state, contemplated by this act, slavery and involuntary servitude, otherwise than in the punishment of crimes, whereof the parties shall have been duly convicted, shall be, and is hereby, forever prohibited: Provided always, That any person escaping into the same, from whom labour or service is lawfully claimed, in any state or territory of the United States, such fugitive may be lawfully reclaimed and conveyed to the person claiming his or her labour or service as aforesaid. 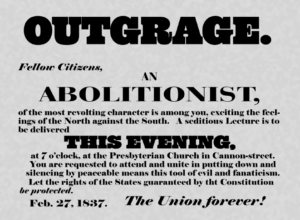 Transcript from the above handbill:

OUTRAGE. Fellow Citizens, an Abolitionist, of the most revolting character is among you, exciting the feelings of the North against the South. A seditious Lecture is to be delivered THIS EVENING, at 7 o’clock, at the Presbyterian Church in Cannon-street. You are requested to attend and unite in putting down and silencing by peaceable means this tool of evil and fanaticism. Let the rights of the States guaranteed by tht Constitution be protected. Feb. 27, 1837. The Union forever!

The language of the Declaration of Independence is … conclusive: … ‘We hold these truths to be self-evident: that all men are created equal.’ …[I]t is too clear for dispute, that the enslaved African race were not intended to be included, and formed no part of the people who framed and adopted this declaration. … They perfectly understood the meaning of the language they used, and how it would be understood by others; and they knew that it would not in any part of the civilized world be supposed to embrace the negro race, which, by common consent, had been excluded from civilized Governments and the family of nations, and doomed to slavery….

The brief preamble [to the Constitution] … declares that it is formed by the people of the United States; that is to say, by those who were members of the different political communities in the several States; and its great object is declared to be to secure the blessings of liberty to themselves and their posterity. It speaks in general terms of the people of the United States, and of citizens of the several States, when it is providing for the exercise of the powers granted or the privileges secured to the citizen. It does not define what description of persons are intended to be included under these terms, or who shall be regarded as a citizen and one of the people.…

[T]here are two clauses in the Constitution which point directly and specifically to the negro race as a separate class of persons, and show clearly that they were not regarded as a portion of the people or citizens of the Government then formed.

[T]he right of property in a slave is distinctly and expressly affirmed in the Constitution. The right to traffic in it, like an ordinary article of merchandise and property, was guaranteed to the citizens of the United States, in every State that might desire it, for twenty years. And the Government in express terms is pledged to protect it in all future time, if the slave escapes from his owner. This is done in plain words—too plain to be misunderstood. And no word can be found in the Constitution which gives Congress a greater power over slave property, or which entitles property of that kind to less protection than property of any other description. The only power conferred is the power coupled with the duty of guarding and protecting the owner in his rights.

[The] question is whether any person of African descent, whose ancestors were sold as slaves in the United States, can be a citizen of the United States. If any such person can be a citizen, this plaintiff has the right to the judgment of the court that he is so, for no cause is shown by the plea why he is not so, except his descent and the slavery of his ancestors….

Of this there can be no doubt. At the time of the ratification of the Articles of Confederation, all free native-born inhabitants of the States of New Hampshire, Massachusetts, New York, New Jersey, and North Carolina, though descended from African slaves, were not only citizens of those States, but such of them as had the other necessary qualifications possessed the franchise of electors, on equal terms with other citizens….

Did the Constitution of the United States deprive them or their descendants of citizenship?

That Constitution was ordained and established by the people of the United States, through the action, in each State, or those persons who were qualified by its laws to act thereon in behalf of themselves and all other citizens of that State. In some of the States, as we have seen, colored persons were among those qualified by law to act on this subject. These colored persons were not only included in the body of “the people of the United States” by whom the Constitution was ordained and established, but, in at least five of the States, they had the power to act, and doubtless did act, by their suffrages, upon the question of its adoption. It would be strange if we were to find in that instrument anything which deprived of their citizenship any part of the people of the United States who were among those by whom it was established.

I have a quarrel with those who fling the Supreme Law of this land between the slave and freedom. …[The Constitution says] “We, the people”—not we, the white people—not we, the citizens, or the legal voters—not we, the privileged class, and excluding all other classes but we, the people; not we, the horses and cattle, but we the people—the men and women, the human inhabitants of the United States, do ordain and establish this Constitution.

I ask, then, any man to read the Constitution, and tell me where, if he can, in what particular that instrument affords the slightest sanction of slavery?

These all strike at the root of slavery, and any one of them, but faith-fully carried out, would put an end to slavery in every State in the American Union.

Chief Justice Taney, in delivering the opinion of the majority of the Court, insists at great length that Negroes were no part of the people who made, or for whom was made, the Declaration of Independence, or the Constitution of the United States. …[T]he Chief Justice does not directly assert, but plainly assumes, as a fact, that the public estimate of the black man is more favorable now than it was in the days of the Revolution. This assumption is a mistake. …In those days, our Declaration of Independence was held sacred by all, and thought to include all; but now, to aid in making the bondage of the Negro universal and eternal, it is assailed, and sneered at, and construed, and hawked at, and torn, till, if its framers could rise from their graves, they could not at all recognize it. …I had thought the Declaration contemplated the progressive improvement in the condition of all men everywhere; but no, it merely “was adopted for the purpose of justifying the colonists in the eyes of the civilized world in withdrawing their allegiance from the British crown, and dissolving their connection with the mother country.” Why, that object having been effected some eighty years ago, the Declaration is of no practical use now—mere rubbish—old wadding left to rot on the battle-field after the victory is won.

And now I appeal to all—are you really willing that the Declaration shall be thus frittered away?—thus left no more at most, than an interesting memorial of the dead past? …shorn of its vitality, and practical value; and left without the germ or even the suggestion of the individual rights of man in it? 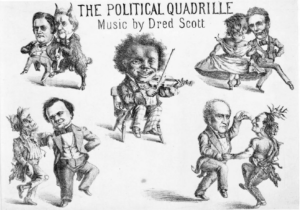 DIRECTIONS: Answer the Key Question in a well-organized essay that incorporates your interpretations of Documents A-M, as well as your own knowledge of history

KEY QUESTION: Analyze how the two sides in the Dred Scott decision interpreted the same Founding documents and came to such different conclusions?