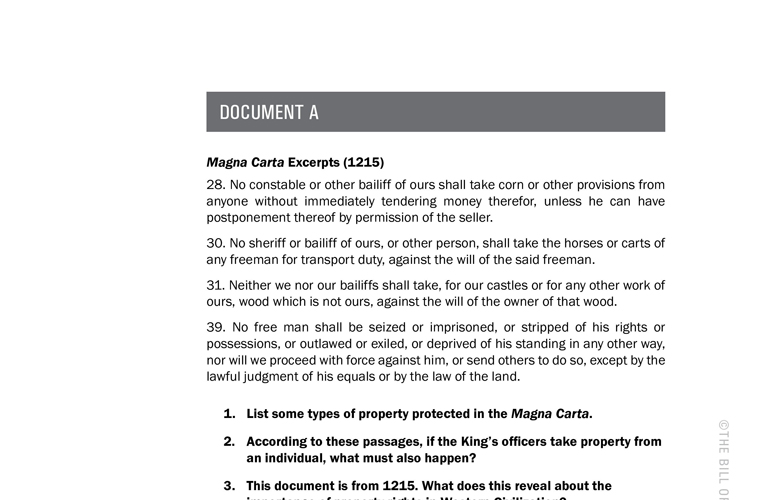 28. No constable or other bailiff of ours shall take corn or other provisions from anyone without immediately tendering money therefor, unless he can have postponement thereof by permission of the seller.

30. No sheriff or bailiff of ours, or other person, shall take the horses or carts of any freeman for transport duty, against the will of the said freeman.

31. Neither we nor our bailiffs shall take, for our castles or for any other work of ours, wood which is not ours, against the will of the owner of that wood.

39. No free man shall be seized or imprisoned, or stripped of his rights or possessions, or outlawed or exiled, or deprived of his standing in any other way, nor will we proceed with force against him, or send others to do so, except by the lawful judgment of his equals or by the law of the land.

The people have a right to hold and enjoy their property according to known standing laws, and which cannot be taken from them without their consent, or the consent of their representatives; and whenever taken in the pressing urgencies of government, they are to receive a reasonable compensation for it…

No person shall … be deprived of life, liberty, or property, without due process of law; nor shall private property be taken for public use, without just compensation.

Government hardly could go on if to some extent values incident to property could not be diminished without paying for every such change in the general law. … One fact for consideration in determining such limits is the extent of the diminution [loss of property value resulting from the law]. When it reaches a certain magnitude, in most if not in all cases there must be an exercise of eminent domain and compensation to sustain the act.

The general rule at least is that while property may be regulated to a certain extent, if regulation goes too far it will be recognized as a taking. … A strong public desire to improve the public condition is not enough to warrant achieving the desire by a shorter cut than the constitutional way of paying for the change.

We have said that the airspace is a public highway. Yet it is obvious that, if the landowner is to have full enjoyment of the land, he must have exclusive control of the immediate reaches of the enveloping atmosphere. Otherwise buildings could not be erected, trees could not be planted and even fences could not be run.…

The landowner owns at least as much of the space above the ground as he can occupy or use in connection with the land … the fact the he does not occupy it in a physical sense—by the erection of buildings and the like—is not material… We would not doubt that, if the United States erected an elevated railway over respondents’ land at the precise altitude where its planes now fly, there would be a partial taking, even though none of the supports of the structure rested on the land. The reason is that there would be an intrusion so immediate and direct as to subtract from the owner’s full enjoyment of the property and to limit his exploitation of it.…

[It has been] establish[ed] that there was a diminution in value of the property, and that the frequent, low-level flights were the direct and immediate cause. We agree with the Court of Claims that a servitude [taking] has been imposed upon the land.

A use restriction on real property may constitute a “taking” if not reasonably necessary to the effectuation of a substantial public purpose, or perhaps if it has an unduly harsh impact upon the owner’s use of the property….

The [Landmarks Preservation Law] embodies a comprehensive plan to preserve structures of historic or aesthetic interest wherever they might be found in the city….

The [Landmarks Preservation Law] does not interfere in any way with the present uses of the Terminal. Its designation as a landmark not only permits, but contemplates, that appellants may continue to use the property precisely as it has been used for the past 65 years: as a railroad terminal containing office space and concessions. …More importantly, on this record, we must regard the New York City law as permitting Penn Central not only to profit from the Terminal but also to obtain a “reasonable return” on its investment.

We conclude that the application of New York City’s Landmarks Law has not effected a “taking” of appellants’ property. The restrictions imposed are substantially related to the promotion of the general welfare, and not only permit reasonable beneficial use of the landmark site, but also afford appellants opportunities further to enhance not only the Terminal site proper but also other properties.

The record is clear that the proposed office building was in full compliance with all New York zoning laws and height limitations. …Although appellants’ architectural plan would have preserved the facade of the Terminal, the Landmarks Preservation Commission has refused to approve the construction….

The Fifth Amendment provides in part: “nor shall private property be taken for public use, without just compensation.” In a very literal sense, the actions of [New York] violated this constitutional prohibition. Before the city of New York declared Grand Central Terminal to be a landmark, Penn Central could have used its “air rights” over the Terminal to build a multistory office building, at an apparent value of several million dollars per year. Today, the Terminal cannot be modified in any form, including the erection of additional stories, without the permission of the Landmark Preservation Commission, a permission which appellants, despite good faith attempts, have so far been unable to obtain.…

Over 50 years ago, [the Court’s opinion in Pennsylvania Coal Co. v. Mahon] warned that the courts were “in danger of forgetting that a strong public desire to improve the public condition is not enough to warrant achieving the desire by a shorter cut than the constitutional way of paying for the change.” The Court’s opinion in this case demonstrates that the danger thus foreseen has not abated.

The importance of the beach and dune system in protecting life and property from storms, providing significant economic revenue through tourism, providing habitat for important plants and animals, and providing a healthy environment for recreation and improved quality of life of all citizens…

In 1986, petitioner Lucas bought two residential lots on a South Carolina barrier island, intending to build single family homes such as those on the immediately adjacent parcels. At that time, Lucas’s lots were not subject to the State’s coastal zone building permit requirements. In 1988, however, the state legislature enacted the Beachfront Management Act, which barred Lucas from erecting any permanent habitable structures on his parcels. He filed suit against respondent state agency, contending that, even though the Act may have been a lawful exercise of the State’s police power, the ban on construction deprived him of all “economically viable use” of his property and therefore effected a “taking” under the Fifth and Fourteenth Amendments that required the payment of just compensation.

Where the State seeks to sustain regulation that deprives land of all economically beneficial use, we think it may resist [paying the owner] compensation only if the … proscribed use interests were not part of his title to begin with.

In the case of land … we think the notion pressed by the South Carolina Coastal Council that title is somehow held subject to the “implied limitation” that the State may subsequently eliminate all economically valuable use is inconsistent with the historical compact recorded in the Takings Clause that has become part of our constitutional culture.

Petitioner Lucas is a contractor, manager, and part owner of the Wild Dune development on the Isle of Palms. He has lived there since 1978. In December 1986, he purchased two of the last four pieces of vacant property in the development. The area is notoriously unstable. In roughly half of the last 40 years, all or part of petitioner’s property was part of the beach or flooded twice daily by the ebb and flow of the tide. …Between 1981 and 1983, the Isle of Palms issued 12 emergency orders for sandbagging to protect property in the Wild Dune development.…

The South Carolina Supreme Court found that the Beachfront Management Act did not take petitioner’s property without compensation. The decision rested on two premises that until today were unassailable — that the State has the power to prevent any use of property it finds to be harmful to its citizens, and that a state statute is entitled to a presumption of constitutionality….

I find no evidence in the record supporting the trial court’s conclusion that the damage to the lots by virtue of the restrictions was “total.”

…In this case, apparently, the State now has the burden of showing the regulation is not a taking. The Court offers no justification for its sudden hostility toward state legislators, and I doubt that it could.… 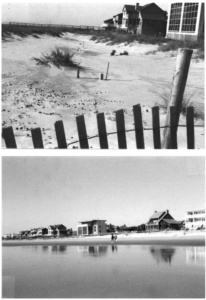 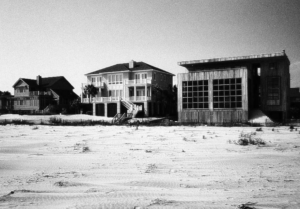 KEY QUESTION: How much should government be able to regulate property before it becomes a “taking” requiring just compensation?