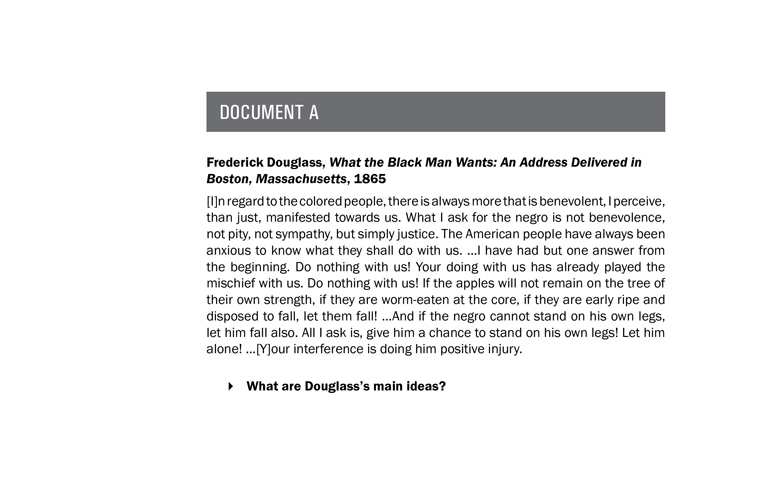 Frederick Douglass, What the Black Man Wants: An Address Delivered in Boston, Massachusetts, 1865

[I]n regard to the colored people, there is always more that is benevolent, I perceive, than just, manifested towards us. What I ask for the negro is not benevolence, not pity, not sympathy, but simply justice. The American people have always been anxious to know what they shall do with us. …I have had but one answer from the beginning. Do nothing with us! Your doing with us has already played the mischief with us. Do nothing with us! If the apples will not remain on the tree of their own strength, if they are worm-eaten at the core, if they are early ripe and disposed to fall, let them fall! …And if the negro cannot stand on his own legs, let him fall also. All I ask is, give him a chance to stand on his own legs! Let him alone! …[Y]our interference is doing him positive injury.

Opinion of Thurgood Marshall, Regents of the University of California v. Bakke, 1978

T[he history of the exclusion of Negro children from white public schools is too well known and recent to require repeating here. That Negroes were deliberately excluded from public graduate and professional schools—and thereby denied the opportunity to become doctors, lawyers, engineers, and the like is also well established.…

The position of the Negro today in America is the tragic but inevitable consequence of centuries of unequal treatment. Measured by any benchmark of comfort or achievement, meaningful equality remains a distant dream for the Negro….

For Negro adults, the unemployment rate is twice that of whites. …Although Negroes represent 11.5% of the population, they are only 1.2% of the lawyers and judges, 2% of the physicians, 2.3% of the dentists, 1.1% of the engineers and 2.6% of the college and university professors….

In light of the sorry history of discrimination and its devastating impact on the lives of Negroes, bringing the Negro into the mainstream of American life should be a state interest of the highest order. To fail to do so is to ensure that America will forever remain a divided society.

Neither [the Fourteenth Amendment’s] history nor our past cases lend any support to the conclusion that a university may not remedy the cumulative effects of society’s discrimination by giving consideration to race in an effort to increase the number and percentage of Negro doctors.

[The Law School seeks to] admit a group of students who individually and collectively are among the most capable … with substantial promise for success in law school… and a strong likelihood of succeeding in the practice of law and contributing in diverse ways to the well-being of others … [and] to enroll a critical mass of minority students.

[The Law School seeks to achieve] a mix of students with varying backgrounds and experiences who will respect and learn from each other and to achieve that diversity which has the potential to enrich everyone’s education and thus make a law school class stronger than the sum of its parts.

[T]he Law School seeks to “enroll a critical mass of minority students.” The Law School’s interest is not simply “to assure within its student body some specified percentage of a particular group merely because of its race or ethnic origin.” That would amount to outright racial balancing, which is patently unconstitutional….

The current Dean of the Law School … did not quantify “critical mass” in terms of numbers or percentages. He indicated that critical mass means numbers such that underrepresented minority students do not feel isolated or like spokespersons for their race. …The Law School’s concept of critical mass is defined by reference to the educational benefits that diversity is designed to produce….

We find that the Law School’s admissions program bears the hallmarks of a narrowly tailored plan….[T]ruly individualized consideration demands that race be used in a flexible, non-mechanical way. It follows from this mandate that universities cannot establish quotas for members of certain racial groups … Universities can, however, consider race or ethnicity more flexibly as a “plus” factor in the context of individualized consideration of each and every applicant….

When using race as a “plus” factor in university admissions, a university’s admissions program must remain flexible enough to ensure that each applicant is evaluated as an individual and not in a way that makes an applicant’s race or ethnicity the defining feature of his or her application….

Here, the Law School engages in a highly individualized, holistic review of each applicant’s file, giving serious consideration to all the ways an applicant might contribute to a diverse educational environment.… There is no policy … of automatic acceptance or rejection based on any single “soft” variable. Unlike the program at issue in Gratz v. Bollinger, the Law School awards no mechanical, predetermined diversity “bonuses” based on race or ethnicity….

The Law School has offered no explanation for its actual admissions practices and, unexplained, we are bound to conclude that the Law School has managed its admissions program, not to achieve a “critical mass,” but to extend offers of admission to members of selected minority groups in proportion to their statistical representation in the applicant pool. But this is precisely the type of racial balancing that the Court itself calls “patently unconstitutional.”…

Note: The following charts are taken from Rehnquist’s opinion. 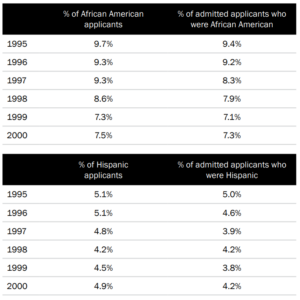 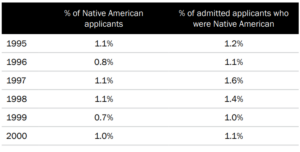 The University of Michigan Law School’s mystical “critical mass” justification for its discrimination by race challenges even the most gullible mind. The admissions statistics show it to be a sham to cover a scheme of racially proportionate admissions.

Frederick Douglass, speaking to a group of abolitionists almost 140 years ago, delivered a message lost on today’s majority. …Like Douglass, I believe blacks can achieve in every avenue of American life without the meddling of university administrators.

The Law School, of its own choosing, and for its own purposes, maintains an exclusionary admissions system that it knows produces racially disproportionate results. Racial discrimination is not a permissible solution to the self-inflicted wounds of this elitist admissions policy….

I agree with the Court’s holding that racial discrimination in higher education admissions will be illegal in 25 years. …I respectfully dissent from the remainder of the Court’s opinion and the judgment, however, because I believe that the Law School’s current use of race violates the Equal Protection Clause and that the Constitution means the same thing today as it will in 300 months.

The [LSA] considers a number of factors in making admissions decisions, including high school grades, standardized test scores, high school quality, curriculum strength, geography, alumni relationships, leadership, and race. During [the period of this case], the University has considered African-Americans, Hispanics, and Native Americans to be “underrepresented minorities,” and it is undisputed that the University admits virtually every qualified applicant from these groups. The current guidelines use a selection method under which every applicant from an underrepresented racial or ethnic minority group is automatically awarded twenty points of the 100 needed to guarantee admission.

We find that the University’s policy, which automatically distributes 20 points, or one-fifth of the points needed to guarantee admission, to every single “underrepresented minority” applicant solely because of race, is not narrowly tailored to achieve the interest in educational diversity that respondents claim justifies their program.

Even if [a Caucasian student’s] “extraordinary artistic talent” rivaled that of Monet or Picasso, the applicant would receive, at most, five points under the LSA’s system. At the same time, every single underrepresented minority applicant … would automatically receive 20 points for submitting an application. Clearly, the LSA’s system does not offer applicants the individualized selection process.…

We conclude, therefore, that because the University’s use of race in its current freshman admissions policy is not narrowly tailored to achieve respondents’ asserted compelling interest in diversity, the admissions policy violates the Equal Protection Clause of the Fourteenth Amendment.

The very nature of a college’s permissible practice of awarding value to racial diversity means that race must be considered in a way that increases some applicants’ chances for admission. [I]t is hard to see what is inappropriate in assigning some stated value to a relevant characteristic, whether it be reasoning ability, writing style, running speed, or minority race….

It suffices for me … that there are no … set-asides and that consideration of an applicant’s whole spectrum of ability is no more ruled out by giving 20 points for race than by giving the same points for athletic ability or socioeconomic disadvantage. 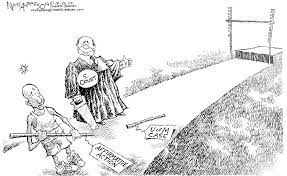 DIRECTIONS: Answer the Key Question in a well-organized essay that incorporates your interpretations of Documents A-L, as well as your own knowledge of history.

KEY QUESTION: Evaluate the Court’s reasoning in upholding Grutter while striking down Gratz.