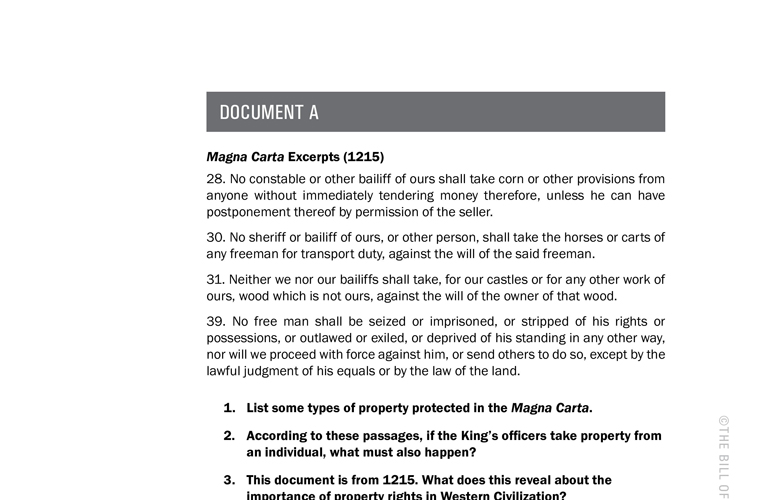 28. No constable or other bailiff of ours shall take corn or other provisions from anyone without immediately tendering money therefore, unless he can have postponement thereof by permission of the seller.

30. No sheriff or bailiff of ours, or other person, shall take the horses or carts of any freeman for transport duty, against the will of the said freeman.

31. Neither we nor our bailiffs shall take, for our castles or for any other work of ours, wood which is not ours, against the will of the owner of that wood.

39. No free man shall be seized or imprisoned, or stripped of his rights or possessions, or outlawed or exiled, or deprived of his standing in any other way, nor will we proceed with force against him, or send others to do so, except by the lawful judgment of his equals or by the law of the land.

Blackstone’s Commentaries on the Laws of England (1765)

So great … is the regard of the law for private property, that it will not authorize the least violation of it; no, not even for the general good of the whole community. If a new road … were to be made through the grounds of a private person, it might perhaps be extensively beneficial to the public; but the law permits no man, or set of men, to do this without the consent of the owner of the land.

No person shall … be deprived of life, liberty, or property, without due process of law; nor shall private property be taken for public use, without just compensation.

There are many cases in which the rights of property must be made subservient to the public welfare. The maxim of law is that a private mischief is to be endured rather than a public inconvenience. On this ground rest the rights of public necessity.

…It undoubtedly must rest in the wisdom of the legislature to determine when public uses [such as building a road through farmland] require the assumption of private property, and if they should take it for a purpose not of a public nature, as if the legislature should take the property of A., and give it to B., the law would be unconstitutional and void.

In this case, we hold that the “right to exclude,” so universally held to be a fundamental element of the property right, falls within this category of interests that the Government cannot take without compensation… Thus, if the Government wishes to make what was formerly Kuapa Pond into a public aquatic park after petitioners have proceeded as far as they have here, it may not, without invoking its eminent domain power and paying just compensation, require them to allow free access to the dredged pond while petitioners’ agreement with their customers calls for an annual $72 regular fee.

…We conclude that a permanent physical occupation authorized by government is a taking without regard to the public interests that it may serve.

Teleprompter’s cable installation on appellant’s building constitutes a taking under the traditional test. The installation involved a direct physical attachment of plates, boxes, wires, bolts, and screws to the building, completely occupying space immediately above and upon the roof and along the building’s exterior wall.

The Nollans’ Bungalow and New Home 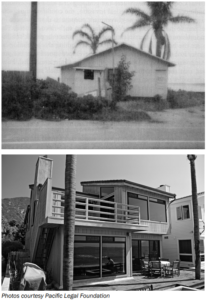 Had California simply required the Nollans to make an easement across their beachfront available to the public on a permanent basis in order to increase public access to the beach, rather than conditioning their permit to rebuild their house on their agreeing to do so, we have no doubt there would have been a taking.….

We have repeatedly held that, as to property reserved by its owner for private use, “the right to exclude [others is] one of the most essential sticks in the bundle of rights that are commonly characterized as property.”…

If the Commission attached to the permit some condition that would have protected the public’s ability to see the beach notwithstanding construction of the new house — for example, a height limitation, a width restriction, or a ban on fences … imposition of the condition would also be constitutional.…

The evident constitutional propriety disappears, however, if the condition substituted for the prohibition [granting access to people already on the beach] utterly fails to further the end advanced as the justification for the prohibition [protecting public view of the beach from the street]. When that essential nexus is eliminated, the situation [is completely different]. …In short, unless the permit condition serves the same governmental purpose as the development ban, the building restriction is not a valid regulation of land use, but an out-and-out plan of extortion.

[It is] the [Coastal] Commission’s belief that the public interest will be served by a continuous strip of publicly accessible beach along the coast. The Commission may well be right that it is a good idea, but that does not establish that the Nollans (and other coastal residents) alone can be compelled to contribute to its realization. Rather, California is free to advance its “comprehensive program,” if it wishes, by using its power of eminent domain for this “public purpose,”… but if it wants an easement across the Nollans’ property, it must pay for it.

The Court’s [ruling] … is based on the assumption that private landowners in this case possess a reasonable expectation regarding the use of their land that the public has attempted to disrupt. In fact, the situation is precisely the reverse: it is private landowners who are the interlopers. The public’s expectation of access considerably [pre-dates] any private development on the coast. Article X, § 4, of the California Constitution, adopted in 1879, declares:

“No individual, partnership, or corporation, claiming or possessing the frontage or tidal lands of a harbor, bay, inlet, estuary, or other navigable water in this State, shall be permitted to exclude the right of way to such water whenever it is required for any public purpose, nor to destroy or obstruct the free navigation of such water; and the Legislature shall enact such laws … so that access to the navigable waters of this State shall always be attainable for the people thereof.”

It is therefore private landowners who threaten the disruption of settled public expectations. Where a private landowner has had a reasonable expectation that his or her property will be used for exclusively private purposes, the disruption of this expectation dictates that the government pay if it wishes the property to be used for a public purpose. In this case, however, the State has sought to protect public expectations of access from disruption by private land use. The State’s exercise of its police power for this purpose deserves no less deference than any other measure designed to further the welfare of state citizens…

The result is that the Court invalidates regulation that represents a reasonable adjustment of the burdens and benefits of development along the California coast….

Without question, had the city simply required petitioner to dedicate a strip of land along Fanno Creek for public use, rather than conditioning the grant of her permit to redevelop her property on such a dedication, a taking would have occurred.

We think a term such as “rough proportionality” best encapsulates what we hold to be the requirement of the Fifth Amendment. No precise mathematical calculation is required, but the city must make some sort of individualized determination that the required dedication is related both in nature and extent to the impact of the proposed development.…

The city has never said why a public greenway, as opposed to a private one, was required in the interest of flood control.

The difference to petitioner, of course, is the loss of her ability to exclude others. As we have noted, this right to exclude others is “one of the most essential sticks in the bundle of rights that are commonly characterized as property.”

…We conclude that the findings upon which the city relies do not show the required reasonable relationship between the floodplain easement and the petitioner’s proposed new building….

[T]he city has not met its burden of demonstrating that the additional number of vehicle and bicycle trips generated by the petitioner’s development reasonably relate to the city’s requirement for a dedication of the pedestrian/bicycle pathway easement. The city simply found that the creation of the pathway “could offset some of the traffic demand … and lessen the increase in traffic congestion.”

In our changing world one thing is certain: uncertainty will characterize predictions about the impact of new urban developments on the risks of floods, earthquakes, traffic congestion, or environmental harms. When there is doubt concerning the magnitude of those impacts, the public interest in averting them must outweigh the private interest of the commercial entrepreneur. If the government can demonstrate that the conditions it has imposed in a land use permit are rational, impartial and conducive to fulfilling the aims of a valid land use plan, a strong presumption of validity should attach to those conditions. The burden of demonstrating that those conditions have unreasonably impaired the economic value of the proposed improvement belongs squarely on the shoulders of the party challenging the state action’s constitutionality. That allocation of burdens has served us well in the past. The Court has stumbled badly today by reversing it. I respectfully dissent.

KEY QUESTION: Why are property rights sometimes referred to as a “bundle of sticks”?