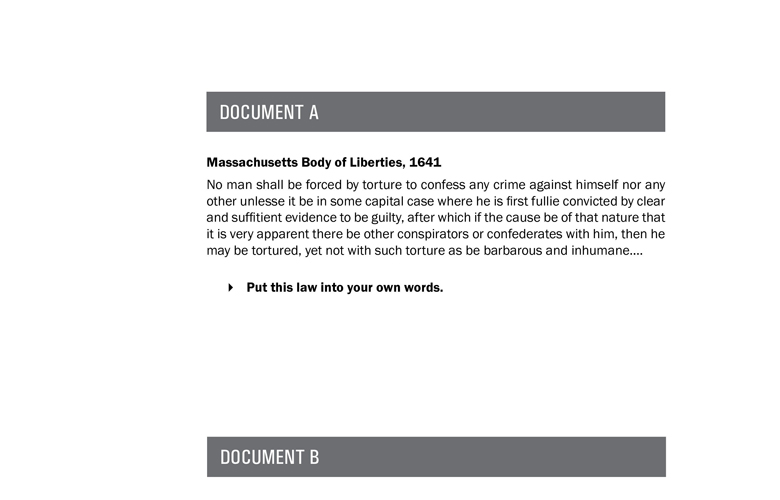 No man shall be forced by torture to confess any crime against himself nor any other unlesse it be in some capital case where he is first fullie convicted by clear and suffitient evidence to be guilty, after which if the cause be of that nature that it is very apparent there be other conspirators or confederates with him, then he may be tortured, yet not with such torture as be barbarous and inhumane.…

It is ordered by the authority of this court that no man shall be forced by torture to confess any crime against himself.

Note: Puritan Minister Cotton Mather gave these instructions to a judge before one of the Salem witch trials.

Now first a credible confession of the guilty wretches is one of the most hopefull wayes of coming at them. …I am farr from urging the Un-English method of torture … but whatever hath a tendency to put the witches into confusion is likely to bring unto confession. …Here Crosse & Swift Questions have their use.

Patrick Henry, Virginia Debates on Ratification of the Constitution, 1788

Congress may introduce the practice of … torturing to extort confessions of the crime. …They will tell you that they must have a criminal equity, and extort confessions by torture, in order to punish with still more relentless severity.…

Sections of the Fifth and Sixth Amendments, 1791

Amendment V: No person … shall be compelled in any criminal case to be a witness against himself, nor be deprived of life, liberty, or property, without due process of law…

Amendment VI: In all criminal prosecutions, the accused shall enjoy the right to a speedy and public trial, by an impartial jury … and to have the assistance of counsel for his defense.

…If at all practicable, the interrogation should take place in the investigator’s office or at least in a room of his own choice. The subject should be deprived of every psychological advantage.…

[The investigator] must interrogate steadily and without relent, leaving the subject no prospect of surcease. He must dominate his subject and overwhelm him with his inexorable will to obtain the truth. He should interrogate for a spell of several hours pausing only for the subject’s necessities in acknowledgment of the need to avoid a charge of duress that can be technically substantiated. In a serious case, the interrogation may continue for days, with the required intervals for food and sleep, but with no respite from the atmosphere of domination. It is possible in this way to induce the subject to talk without resorting to duress or coercion.…

It is obvious that such an interrogation environment is created for no purpose other than to subjugate the individual to the will of his examiner. This atmosphere carries its own badge of intimidation. To be sure, this is not physical intimidation, but it is equally destructive of human dignity….

An individual swept from familiar surroundings into police custody, surrounded by antagonistic forces, and subjected to the techniques of persuasion described above cannot be otherwise than under compulsion to speak.…

[T]here can be no doubt that the Fifth Amendment privilege is available outside of criminal court proceedings and serves to protect persons in all settings in which their freedom of action is curtailed in any significant way from being compelled to incriminate themselves.

We have concluded that without proper safeguards the process of in-custody interrogation of persons suspected or accused of crime contains inherently compelling pressures which work to undermine the individual’s will to resist and to compel him to speak where he would not otherwise do so freely. In order to combat these pressures and to permit a full opportunity to exercise the privilege against self-incrimination, the accused must be adequately and effectively apprised of his rights and the exercise of those rights must be fully honored. The Fifth Amendment privilege is so fundamental to our system of constitutional rule and the expedient of giving an adequate warning as to the availability of the privilege so simple, we will not pause to inquire in individual cases whether the defendant was aware of his rights without a warning being given.…

In dealing with statements obtained through interrogation, we do not purport to find all confessions inadmissible. Confessions remain a proper element in law enforcement. Any statement given freely and voluntarily without any compelling influences is, of course, admissible in evidence. …Volunteered statements of any kind are not barred by the Fifth Amendment and their admissibility is not affected by our holding today.

How does the Court define “compelling influences”? Why does the Court hold that it is unconstitutional for police to interrogate accused persons without informing them of their “Fifth Amendment privilege”?

An accused, arrested on probable cause, may blurt out a confession which will be admissible. …Yet, under the Court’s rule, if the police ask him a single question … his response, if there is one, has somehow been compelled, even if the accused has been clearly warned of his right to remain silent. Common sense informs us to the contrary.

[I]f the defendant may not answer without a warning a question such as “Where were you last night?” without having his answer be a compelled one, how can the Court ever accept his negative answer to the question of whether he wants to consult his retained counsel or counsel whom the court will appoint? And why, if counsel is present and the accused nevertheless confesses, or counsel tells the accused to tell the truth and that is what the accused does, is the situation any less coercive insofar as the accused is concerned?

All of this makes very little sense in terms of the compulsion which the Fifth Amendment proscribes….

The Court’s opinion, in my view, reveals no adequate basis for extending the Fifth Amendment’s privilege against self-incrimination to the police station. Far more important, it fails to show that the Court’s new rules are well supported, let alone compelled, by Fifth Amendment precedents. Instead, the new rules actually derive from quotation and analogy drawn from precedents under the Sixth Amendment, which should properly have no bearing on police interrogation….

[The majority holds that] pressure on the suspect must be eliminated, though it be only the subtle influence of the atmosphere and surroundings. The Fifth Amendment, however, has never been thought to forbid all pressure to incriminate one’s self in the situations covered by it….

Miranda’s oral and written confessions are now held inadmissible under the Court’s new rules. One is entitled to feel astonished that the Constitution can be read to produce this result. These confessions were obtained during brief, daytime questioning conducted by two officers and unmarked by any of the traditional indicia of coercion. They assured a conviction for a brutal and unsettling crime, for which the police had and quite possibly could obtain little evidence other than the victim’s identifications, evidence which is frequently unreliable. There was, in sum, a legitimate purpose, no perceptible unfairness, and certainly little risk of injustice in the interrogation. Yet the resulting confessions, and the responsible course of police practice they represent, are to be sacrificed to the Court’s own fine-spun conception of fairness which I seriously doubt is shared by many thinking citizens in this country…. 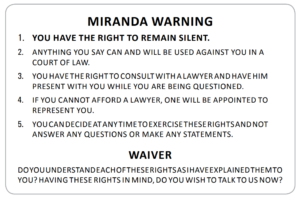 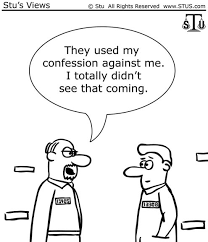 DIRECTIONS: Answer the Key Question in a well-organized essay that incorporates your interpretations of Documents A-K, as well as your own knowledge of history

KEY QUESTION: Evaluate the extent to which the ruling in Miranda is the fulfillment of the legal tradition of the promise against self-incrimination.