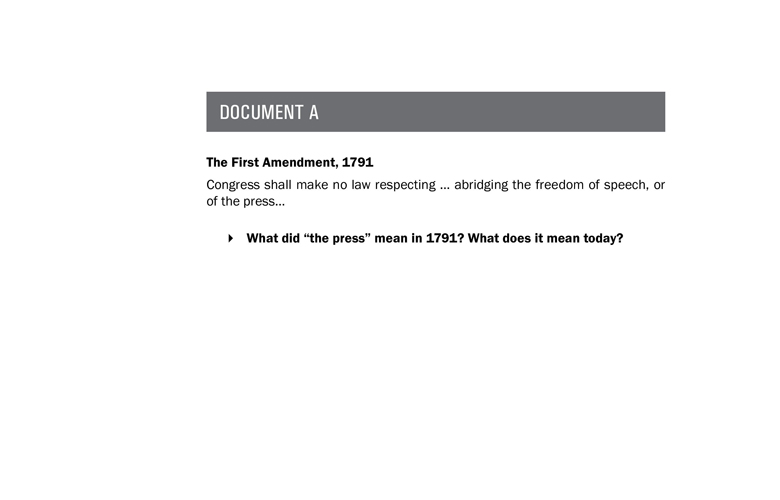 Congress shall make no law respecting … abridging the freedom of speech, or of the press…

Note: This case concerned students who had been suspended students for wearing black armbands to school in protest of the Vietnam War.

First Amendment rights, applied in light of the special characteristics of the school environment, are available to teachers and students. It can hardly be argued that either students or teachers shed their constitutional rights to freedom of speech or expression at the schoolhouse gate….

In order for the State in the person of school officials to justify prohibition of a particular expression of opinion, it must be able to show that its action was caused by something more than a mere desire to avoid the discomfort and unpleasantness that always accompany an unpopular viewpoint. Certainly where there is no finding and no showing that engaging in the forbidden conduct would materially and substantially interfere with the requirements of appropriate discipline in the operation of the school the prohibition cannot be sustained.…

[T]he record fails to yield evidence that the school authorities had reason to anticipate that the wearing of the armbands would substantially interfere with the work of the school or impinge upon the rights of other students … [and] the school officials banned and sought to punish petitioners for a silent, passive expression of opinion, unaccompanied by any disorder or disturbance.…

Note: The principal had objections to the stories titled “Divorce’s impact on kids may have lifelong effect” and “Pressure describes it all for today’s teenagers.” 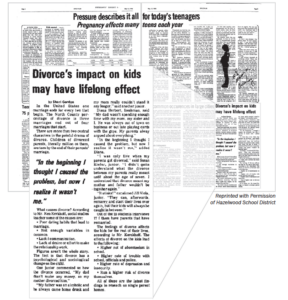 In the United States one marriage ends for every two that begin. The North County percentage of divorce is three marriages end out of four marriages that start.

There are more than two central characters in the painful drama of divorce. Children of divorced parents, literally millions of them, are torn by the end of their parents’ marriage.

“In the beginning I thought I caused the problem, but now I realize it wasn’t me”

What causes divorce? According to Mr. Ken Kerkhoff, social studies teacher some of the causes are:

Figures aren’t the whole story. The fact is that divorce has a psychological and sociological change on the child.

One junior commented on how the divorce occurred, “My dad didn’t make any money, so my mother divorced him.”

“My father was an alcoholic and he always came home drunk and my mom really couldn’t stand it any longer,” said another junior.

Diana Herbert, freshman, said “My dad wasn’t spending enough time with my mom, my sister, and I. He was always out of time on business or out late playing cards with the guys. My parents always argued about everything.”

“In the beginning I thought I caused the problem but now I realize it wasn’t me,” added Diana.

“I was only five when my parents got divorced,” said Susan Kiefer, junior. “I didn’t quite understand what the divorce between my parents really meant until about the age of seven. I understood that divorce meant my mother and father wouldn’t be together again.”

“It stinks!” exclaimed Jill Viola, junior. “They can, afterwards, remarry and start their lives over again, but their kids will always be caught in between.”

Out of the 25 students interviewed, 17 of them have parents that have remarried.

The feelings of divorce affects the kids for the rest of their lives, according to Mr. Kerckhoff. The effects of divorce on the kids lead to the following:

All of these are the latest findings in research on single parent homes.

Note: This case concerned a student who had been suspended for giving a student-government nomination speech filled with sexual innuendo.

This Court acknowledged in Tinker v. Des Moines that students do not “shed their constitutional rights to freedom of speech or expression at the schoolhouse gate.” …In upholding the students’ right to engage in a non-disruptive, passive expression of a political viewpoint in Tinker, this Court was careful to note that the case did “not concern speech or action that intrudes upon the work of the schools or the rights of other students.”

[The] fundamental values of habits and manners of civility essential to a democratic society must, of course, include tolerance of divergent political and religious views, even when the views expressed may be unpopular. But these “fundamental values” must also take into account consideration of the sensibilities of others, and, in the case of a school, the sensibilities of fellow students….

Note: Beginning in 1982, this statement appeared annually in the Spectrum.

Spectrum, as a student-press publication, accepts all rights implied by the First Amendment….

All … editorials appearing in this newspaper reflect the opinions of the Spectrum staff, which are not necessarily shared by the administrators or faculty of Hazelwood East.…

School-sponsored student publications will not restrict free expression or diverse viewpoints within the rules of responsible journalism.

MR. BAINE: [T]he principal could understand the school audience as well as anyone else in that some of the information in those articles might make it appear that because it was produced in a classroom exercise that the school in effect had condoned the activities of these children, of these young ladies who had gotten pregnant, for example.…

QUESTION: Even if the school would not appear as condoning it, the school was certainly providing the paper and the ink and the money to write the story, right, which was not the case in Tinker?

MR. BAINE: Well, that is true.

QUESTION: It was their own arm bands in Tinker, they brought them from home, the school did not provide them?

We deal first with the question whether Spectrum may appropriately be characterized as a forum for public expression. …School facilities may be deemed to be public forums only if school authorities have by policy or by practice opened those facilities for indiscriminate use by the general public or by some segment of the public, such as student organizations. If the facilities have instead been reserved for other intended purposes … then no public forum has been created. …The government does not create a public forum by inaction or by permitting limited discourse, but only by intentionally opening a nontraditional forum for public discourse….

School officials did not evince either by policy or by practice any intent to open the pages of Spectrum to indiscriminate use by its student reporters and editors, or by the student body generally. Instead, they reserved the forum for its intended purpose as a supervised learning experience for journalism students. Accordingly, school officials were entitled to regulate the contents of Spectrum in any reasonable manner.

Educators are entitled to exercise greater control over this second form of student expression to assure that participants learn whatever lessons the activity is designed to teach, that readers or listeners are not exposed to material that may be inappropriate for their level of maturity, and that the views of the individual speaker are not erroneously attributed to the school….

A school must be able to set high standards for the student speech that is disseminated under its auspices—standards that may be higher than those demanded by some newspaper publishers or theatrical producers in the “real” world—and may refuse to disseminate student speech that does not meet those standards. …A school must also retain the authority to refuse to sponsor student speech that might reasonably be perceived to advocate drug or alcohol use, irresponsible sex, or conduct otherwise inconsistent with the shared values of a civilized social order, or to associate the school with any position other than neutrality on matters of political controversy.

[W]e hold that educators do not offend the First Amendment by exercising editorial control over the style and content of student speech in school-sponsored expressive activities, so long as their actions are reasonably related to legitimate pedagogical concerns….

The school principal, without prior consultation or explanation, excised … articles … of the May 13, 1983, issue of Spectrum. He did so not because any of the articles would “materially and substantially interfere with the requirements of appropriate discipline,” but simply because he considered [them] “inappropriate, personal, sensitive, and unsuitable” for student consumption.

The Court offers no more than an obscure tangle of three excuses to afford educators “greater control” over school-sponsored speech than the Tinker test would permit: the public educator’s prerogative to control curriculum; the pedagogical interest in shielding the high school audience from objectionable viewpoints and sensitive topics; and the school’s need to dissociate itself from student expression. None of the excuses … supports the distinction that the Court draws. Tinker fully addresses the first concern; the second is illegitimate; and the third is readily achievable through less oppressive means….

Official censorship … in no way furthers the curricular purposes of a student newspaper unless one believes that the purpose of the school newspaper is to teach students that the press ought never report bad news, express unpopular views, or print a thought that might upset its sponsors….

Tinker teaches us that the state educator’s undeniable … mandate to inculcate moral and political values is not a general warrant to act as thought police, stifling discussion of all but state-approved topics.…

The case before us aptly illustrates how readily school officials (and courts) can camouflage viewpoint discrimination as the mere protection of students from sensitive topics….

Dissociative means short of censorship are available to the school. It could, for example, require the student activity to publish a disclaimer, such as the “Statement of Policy” that Spectrum published each school year … or it could simply issue its own response clarifying the official position on the matter and explaining why the student position is wrong. Yet, without so much as acknowledging the less oppressive alternatives, the Court approves of brutal censorship….

The young men and women of Hazelwood East expected a civics lesson, but not the one the Court teaches them today. I dissent.

The case had nothing to do with what is being taught in the curriculum; it had solely to do with what students were allowed to publish. …[T]he legacy of Hazelwood is that it helped to create a generation of young people who don’t have a clue what the First Amendment is about when they leave high school. Many students are taught that there is only freedom of expression when those in power agree with what you are saying.
–Mark Goodman, Executive Director of the Student Press Law Center

[T]his is an issue of the control of curriculum. I think that the Tinker case had been abused. The original basis for Tinker was good but some lower courts had expanded Tinker to the point where school officials would have had to permit the printing of anything students wrote. …There is a saying that ‘all education is local,’ and I think the Hazelwood case stands for that principle.
–Robert P. Baine Jr., Attorney for Hazelwood School District

Future of the First Amendment Study, 2005

DIRECTIONS: Answer the Key Question in a well-organized essay that incorporates your interpretations of Documents A-K, as well as your own knowledge of history.

KEY QUESTION: Argue whether or not the First Amendment should protect student speech in public school-sponsored newspapers.