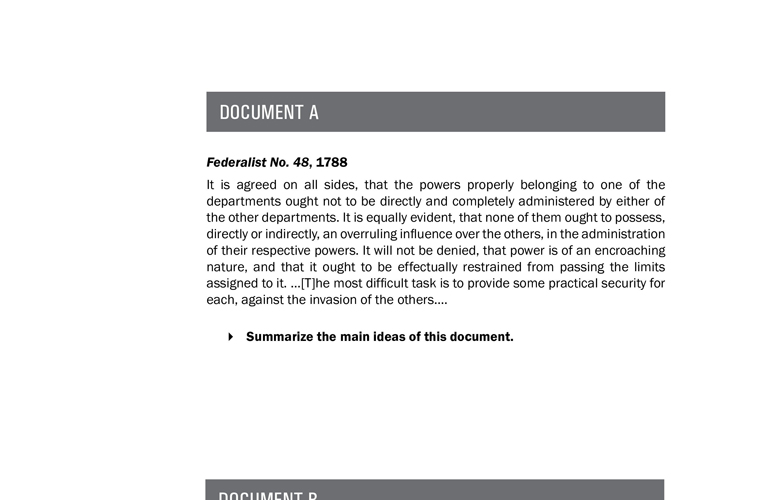 It is agreed on all sides, that the powers properly belonging to one of the departments ought not to be directly and completely administered by either of the other departments. It is equally evident, that none of them ought to possess, directly or indirectly, an overruling influence over the others, in the administration of their respective powers. It will not be denied, that power is of an encroaching nature, and that it ought to be effectually restrained from passing the limits assigned to it. …[T]he most difficult task is to provide some practical security for each, against the invasion of the others….

In order to lay a due foundation for that separate and distinct exercise of the different powers of government, which to a certain extent is admitted on all hands to be essential to the preservation of liberty, it is evident that each department should have a will of its own.

Energy in the Executive is a leading character in the definition of good government. It is essential to the protection of the community against foreign attacks; it is not less essential to the steady administration of the laws; to the protection of property against those irregular and high-handed combinations which sometimes interrupt the ordinary course of justice; to the security of liberty against the enterprises and assaults of ambition, of faction, and of anarchy….

In England, the king is a perpetual magistrate; and it is a maxim which has obtained for the sake of the public peace, that he is unaccountable for his administration, and his person sacred. …He is the absolute master of his own conduct in the exercise of his office, and may observe or disregard the counsel given to him at his sole discretion.

But in a republic … every magistrate ought to be personally responsible for his behavior in office.…

Note: This caricature was in response to President Andrew Jackson’s order to remove federal deposits from the Bank of the United States—an order he gave without approval from Congress. 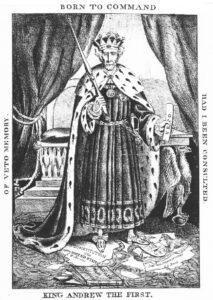 Resolution of the House of Representatives and Reply of the President, 1861

RESOLUTION: Resolved, That the President be requested immediately to communicate to this House, if in his judgment not incompatible with the public interest, the grounds, reason, and evidence upon which the police commissioners of Baltimore were arrested, and are now detained as prisoners at Fort McHenry.

To the House of Representatives:

In answer to the resolution of the House of Representatives of the 24th instant, asking the grounds, reason, and evidence upon which the police commissioners of Baltimore were arrested and are now detained as prisoners at Fort McHenry, I have to state that it is judged to be incompatible with the public interest at this time to furnish the information called for by the resolution.

Within [our] Constitutional framework each branch should cooperate fully with each other for the common good. However, throughout our history the President has withheld information whenever he found that what was sought was confidential or its disclosure would be incompatible with the pubic interest or jeopardize the safety of the Nation.

Because it is essential to efficient and effective administration that employees of the Executive Branch be in a position to be completely candid in advising with each other on official matters, and because it is not in the public interest that any of their conversations … be disclosed, you will instruct employees [that] they are not to testify [to Congress] to any such conversations.…

I direct this action so as to maintain the proper separation of powers between the Executive and Legislative Branches of the Government in accordance with my responsibilities and duties under the Constitution.… 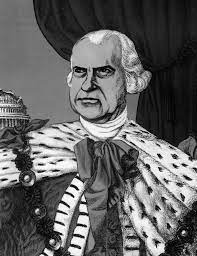 In the performance of assigned constitutional duties each branch of the Government must initially interpret the Constitution, and the interpretation of its powers by any branch is due great respect from the others. The President’s counsel, as we have noted, reads the Constitution as providing an absolute privilege of confidentiality for all Presidential communications.

In support of his claim of absolute privilege, the President’s counsel urges two grounds. …The first ground is the valid need for protection of communications between high Government officials and those who advise and assist them in the performance of their manifold duties; the importance of this confidentiality is too plain to require further discussion. Human experience teaches that those who expect public dissemination of their remarks may well temper candor with a concern for appearances and for their own interests to the detriment of the decision making process.

The second ground … rests on the doctrine of separation of powers. Here it is argued that the independence of the Executive Branch within its own sphere … insulates a President from a judicial subpoena in an ongoing criminal prosecution, and thereby protects confidential Presidential communications.

However, neither the doctrine of separation of powers, nor the need for confidentiality of high-level communications, without more, can sustain an absolute, unqualified Presidential privilege of immunity from judicial process under all circumstances. …Absent a claim of need to protect military, diplomatic, or sensitive national security secrets.…

[T]his presumptive privilege must be considered in light of our historic commitment to the rule of law. …The very integrity of the judicial system and public confidence in the system depend on full disclosure of all the facts, within the framework of the rules of evidence. To ensure that justice is done, it is imperative to the function of courts that compulsory process be available for the production of evidence needed either by the prosecution or by the defense.…

We conclude that when the ground for asserting privilege as to subpoenaed materials sought for use in a criminal trial is based only on the generalized interest in confidentiality, it cannot prevail over the fundamental demands of due process of law in the fair administration of criminal justice. The generalized assertion of privilege must yield to the demonstrated, specific need for evidence in a pending criminal trial. 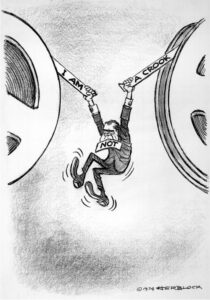 No caption: Drawing of Nixon between two tapes with “I AM NOT A CROOK” writing on tape.
A 1974 Herblock Cartoon, copyright by The Herb Block Foundation

Executive privilege is an extraordinary assertion of power not to be lightly invoked. Once executive privilege is asserted, coequal branches of the Government are set on a collision course. The Judiciary is forced into the difficult task of balancing the need for information in a judicial proceeding and the Executive’s Article II prerogatives. This inquiry places courts in the awkward position of evaluating the Executive’s claims of confidentiality and autonomy, and pushes to the fore difficult questions of separation of powers and checks and balances….

DIRECTIONS: Answer the Key Question in a well-organized essay that incorporates your interpretations of Documents A-J, as well as your own knowledge of history.

KEY QUESTION: Was the Constitution’s separation of powers intended to create an absolute executive privilege?