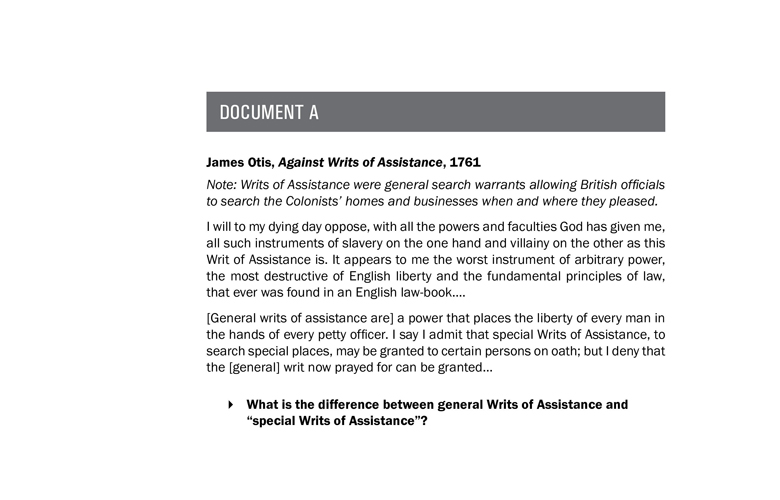 James Otis, Against Writs of Assistance, 1761

Note: Writs of Assistance were general search warrants allowing British officials to search the Colonists’ homes and businesses when and where they pleased.

I will to my dying day oppose, with all the powers and faculties God has given me, all such instruments of slavery on the one hand and villainy on the other as this Writ of Assistance is. It appears to me the worst instrument of arbitrary power, the most destructive of English liberty and the fundamental principles of law, that ever was found in an English law-book….

[General writs of assistance are] a power that places the liberty of every man in the hands of every petty officer. I say I admit that special Writs of Assistance, to search special places, may be granted to certain persons on oath; but I deny that the [general] writ now prayed for can be granted…

The right of the people to be secure in their persons, houses, papers, and effects, against unreasonable searches and seizures, shall not be violated, and no warrants shall issue, but upon probable cause, supported by oath or affirmation, and particularly describing the place to be searched, and the persons or things to be seized.

Section of The Fifth Amendment, 1791

No person shall be … compelled in any criminal case to be a witness against himself.

Excerpt from the Fourteenth Amendment, 1868

No state shall … deprive any person of life, liberty, or property, without due process of law.

Where letters and papers of the accused were taken from his premises by an official of the United States … without any search warrant and in violation of the constitutional rights of accused under the Fourth Amendment, and … they are used in evidence over his objections, prejudicial error is committed and the judgment [conviction] should be reversed.

[The Fourth Amendment] took its origin in the determination of the framers of the Amendments to the Federal Constitution to provide for that instrument a Bill of Rights, securing to the American people … those safeguards … to protect the people from unreasonable searches and seizures, such as were permitted under the general warrants … and seizures under the so-called writs of assistance, issued in the American colonies.

In Weeks v. United States, this Court held that in a federal prosecution the Fourth Amendment barred the use of evidence secured through an illegal search and seizure. This ruling was made for the first time in 1914. It was not derived from the explicit requirements of the Fourth Amendment.…

The exclusion of evidence is a remedy which directly serves only to protect those upon whose person or premises something incriminating has been found. We cannot, therefore, regard it as a departure from basic standards to remand such persons … to the remedies of private action and such protection as the internal discipline of the police, under the eyes of an alert public opinion, may afford.…

We hold, therefore, that in a prosecution in a State court for a State crime the Fourteenth Amendment does not forbid the admission of evidence obtained by an unreasonable search and seizure.

Since the Fourth Amendment’s right of privacy has been declared enforceable against the States through the Due Process Clause of the Fourteenth, it is enforceable against them by the same sanction of exclusion as is used against the Federal Government … in extending the substantive protections of due process to all constitutionally unreasonable searches—state or federal—it was logically and constitutionally necessary that the exclusion doctrine—an essential part of the right to privacy—be also insisted upon as an essential ingredient of the right.…

[O]ur holding that the exclusionary rule is an essential part of both the Fourth and Fourteenth Amendments is not only the logical dictate of prior cases, but it also makes very good sense. There is no war between the Constitution and common sense.

There are those who say … that under our constitutional exclusionary doctrine “[t]he criminal is to go free because the constable has blundered.” …[And] in some cases this will undoubtedly be the result. But…there is another consideration—the imperative of judicial integrity. …The criminal goes free, if he must, but it is the law that sets him free. Nothing can destroy a government more quickly than its failure to observe its own laws, or worse, its disregard of the charter of its own existence.

Our decision, founded on reason and truth, gives to the individual no more than that which the Constitution guarantees him, to the police officer no less than that to which honest law enforcement is entitled, and, to the courts, that judicial integrity so necessary in the true administration of justice.

I am still not persuaded that the Fourth Amendment, standing alone, would be enough to bar the introduction into evidence against an accused of papers and effects seized from him in violation of its commands. For the Fourth Amendment does not itself contain any provision expressly precluding the use of such evidence, and I am extremely doubtful that such a provision could properly be inferred from nothing more than the basic command against unreasonable searches and seizures. Reflection on the problem, however … has led me to conclude that when the Fourth Amendment’s ban against unreasonable searches and seizures is considered together with the Fifth Amendment’s ban against compelled self-incrimination, a constitutional basis emerges which not only justifies but actually requires the exclusionary rule.

In this posture of things, I think it fair to say that five members of this Court have simply “reached out” to overrule Wolf….

It seems to me that justice might well have been done in this case without overturning a decision on which the administration of criminal law in many of the States has long justifiably relied….

I would not impose upon the States this federal exclusionary remedy…. Our concern here is not with the desirability of that [exclusionary] rule but only with the question whether the States are Constitutionally free to follow it or not as they themselves determine….

“I Don’t Care That Your Conviction Was Overturned,” 2002 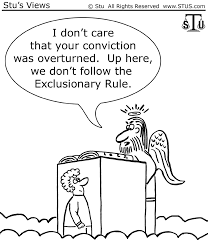 DIRECTIONS: Answer the Key Question in a well-organized essay that incorporates your interpretations of Documents A-J, as well as your own knowledge of history.