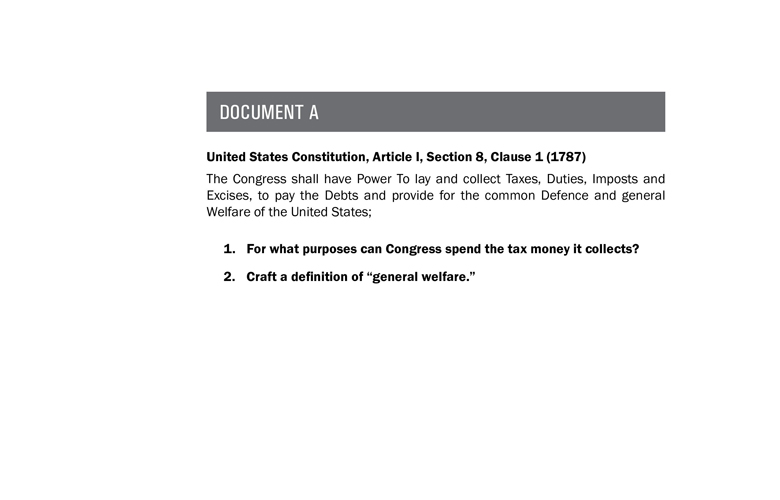 The Congress shall have Power To lay and collect Taxes, Duties, Imposts and Excises, to pay the Debts and provide for the common Defence and general Welfare of the United States;

I would ask … Are these terms [common defense and general welfare] definite, and will they be understood in the same manner, and to apply to the same cases by every one? No one will pretend they will. It will then be matter of opinion, what tends to the general welfare; and the Congress will be the only judges in the matter.

To provide for the general welfare, is an abstract proposition, which mankind differ in the explanation of … the most opposite measures may be pursued by different parties, and both may profess, that they have in view the general welfare; and both sides may be honest in their professions, or both may have sinister views.

It is absurd to say, that the power of Congress is limited by these general expressions, to ‘provide for the common defense and general welfare’…The government would always say, their measures were designed and calculated to promote the public good; and there being no judge between them and the people, the rulers themselves must, and would always, judge for themselves.

It has been urged and echoed, that the power to … ‘provide for the common defense and general welfare of the United States,’ amounts to an unlimited commission to exercise every power which may be alleged necessary for the common defense or general welfare. Had no other enumeration or definition of the powers of the Congress been found in the Constitution, than the general expressions just cited, the authors of the objection might have had some color [proof] for it…

But what color can the objection have, when a specification of the objects alluded to by these general terms immediately follows, and is not even separated by a longer pause than a semicolon?… For what purpose could the enumeration of particular powers be inserted, if these and all others were meant to be included in the preceding general power?

Nothing is more natural nor common than first to use a general phrase, and then to explain and qualify it by a recital of particulars. But the idea of an enumeration of particulars which neither explain nor qualify the general meaning, and can have no other effect that to confound and mislead, is an absurdity…

The powers delegated by the proposed Constitution to the federal government, are few and defined. Those which are to remain in the State governments are numerous and indefinite. The former will be exercised principally on external objects, as war, peace, negotiation, and foreign commerce; with which last the power of taxation will, for the most part, be connected. The powers reserved to the several States will extend to all the objects which, in the ordinary course of affairs, concern the lives, liberties, and properties of the people, and the internal order, improvement, and prosperity of the State.

The powers not delegated to the United States by the Constitution, nor prohibited by it to the States, are reserved to the States respectively, or to the people.

The [General Welfare] clause confers a power separate and distinct from those later enumerated, is not restricted in meaning by the grant of them, and Congress consequently has subsequent power to tax and to appropriate, limited only by the requirement that it shall be exercised to provide for the general welfare of the United States … the power of Congress to authorize expenditure of public moneys for public purposes is not limited by the direct grants of legislative power found in the Constitution. But [the spending power is] subject to limitations.

[However] … the Act [the Agricultural Adjustment Act] invades the reserved rights of the states. It is a statutory plan to regulate and control agricultural production – a matter beyond the powers delegated to the federal government. The tax, the appropriation of funds raised, and the direction for their disbursements are but parts of the plan. They are but means to an unconstitutional end.

The Government asserts that [the Act] is constitutionally sound because the end is accomplished by voluntary cooperation. The regulation is not, in fact, voluntary. …The amount offered [or withheld] is intended to be sufficient to exert pressure on him to agree to the proposed regulation. The power to confer or withhold unlimited benefits is the power to coerce or destroy. …At best, it is a scheme for purchasing with federal funds submission to federal regulation of a subject reserved to the states.

Congress has no power to enforce its commands on the farmer to the ends sought by the Agricultural Adjustment Act. It must follow that it may not indirectly accomplish those ends by taxing and spending to purchase compliance.

The Constitution empowers Congress to ‘lay and collect Taxes … and provide for the common Defense and general Welfare of the United States.’ Incident to this power, Congress may attach conditions on the receipt of federal funds. …The breadth of this power was made clear in United States v. Butler, …Thus, objectives not thought to be within Article I’s [enumerated powers] may nevertheless be attained through the use of the spending power and the conditional grant of federal funds.

The spending power is not unlimited, but is instead limited by several general restrictions …[1] the exercise of the spending power must be in pursuit of ‘the general welfare’…[2] if Congress desires to condition the States’ receipt of federal funds, it ‘must do so unambiguously, enabling States to exercise their choice knowingly, …[3] conditions [must be related]‘to the federal interest in particular national projects or programs’…[4, given that] other constitutional provisions [do not] provide an independent bar to the conditional grant of federal funds.

Congress found that the differing drinking ages in the States created particular incentives for young persons to combine their desire to drink with their ability to drive, and that this interstate problem required a national solution. The means it chose to address this dangerous situation [withholding 5% of highway funds available to States that refused to raise their drinking age to 21] were reasonably calculated to advance the general welfare. The conditions upon which States receive the funds, moreover, could not be more clearly stated by Congress. By enacting [the National Minimum Legal Drinking Age Act, 1984], Congress conditioned the receipt of federal funds in a way reasonably calculated to address this particular impediment to a purpose for which the funds are expended [a safe interstate highway system].

Our decisions have recognized that, in some circumstances, the financial inducement offered by Congress might be so coercive as to pass the point at which ‘pressure turns into compulsion.’ Here, however, Congress has directed only that a State desiring to establish a minimum drinking age lower than 21 lose a relatively small percentage [5%] of certain federal highway funds.

Here, Congress has offered relatively mild encouragement to the States to enact higher minimum drinking ages than they would otherwise choose. But the enactment of such laws remains the prerogative of the States not merely in theory, but in fact. Even if Congress might lack the power to impose a national minimum drinking age directly, we conclude that encouragement to state action [through the attachment of conditions to federal funds] is a valid use of the spending power.

…[T]he Court’s application of the requirement that the condition imposed be reasonably related to the purpose for which the funds are expended is cursory and unconvincing. In my view, establishment of a minimum drinking age of 21 is not sufficiently related to interstate highway construction to justify so conditioning funds for that purpose.

When Congress appropriates money to build a highway, it is entitled to insist that the highway be a safe one. But it is not entitled to insist as a condition of the use of highway funds that the State impose or change regulations in other areas of the State’s social and economic life because of attenuated [weak] or tangential relationship to highway use or safety. Indeed, if the rule were otherwise, the Congress could effectively regulate almost any area of a State’s social, political, or economic life on the theory that use of the interstate transportation system is somehow enhanced.

Rather than a condition determining how federal highway money shall be expended, it is a regulation determining who shall be able to drink liquor. As such, it is not justified by the spending power.

The immense size and power of the Government of the United States ought not obscure its fundamental character. It remains a Government of enumerated powers. Because [the National Minimum Legal Drinking Age Act, 1984] cannot be justified as an exercise of any power delegated to the Congress, it is not authorized by the Constitution. 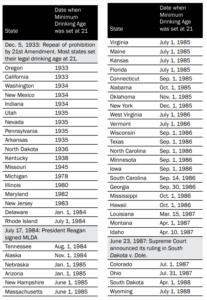 KEY QUESTION: Evaluate the extent to which each of these is consistent with the principle of federalism: