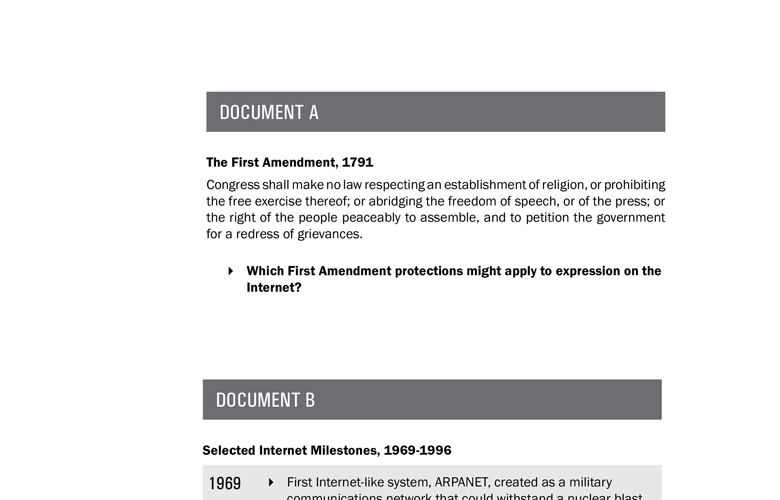 1969
First Internet-like system, ARPANET, created as a military communications network that could withstand a nuclear blast

1992
Approximately 50 Web sites on the Internet

§223(a)
Whoever … in interstate or foreign communications … by means of a telecommunications device knowingly … makes, creates, or solicits, and … initiates the transmission of any comment, request, suggestion, proposal, image, or other communication which is obscene or indecent, knowing that the recipient of the communication is under 18 years of age … shall be fined under Title 18, or imprisoned not more than two years, or both….

§223(d)
Whoever … in interstate or foreign communications knowingly … uses an interactive computer service to send to a specific person or persons under 18 years of age, or … uses any interactive computer service to display in a manner available to a person under 18 years of age, any comment, request, suggestion, proposal, image, or other communication that, in context, depicts or describes, in terms patently offensive as measured by contemporary community standards, sexual or excretory activities or organs, regardless of whether the user of such service placed the call or initiated the communication … shall be fined under Title 18, or imprisoned not more than two years, or both.

It is no exaggeration to conclude that the Internet has achieved, and continues to achieve, the most participatory marketplace of mass speech that this country—and indeed the world—has yet seen….

True it is that many find some of the speech on the Internet to be offensive … The absence of governmental regulation of Internet content has unquestionably produced a kind of chaos. …Just as the strength of the Internet is chaos, so the strength of our liberty depends upon the chaos and cacophony of the unfettered speech the First Amendment protects. 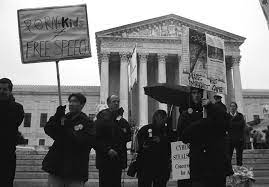 Note: Seth Waxman defended the constitutionality of the CDA.

QUESTION: I take it then that you would also defend the constitutionality of a statute which … prohibited indecent conversations on a public [park] with minors present—

MR. WAXMAN: It’s a harder case because a public park is a—it’s a free space. It’s an area where, unlike the Internet, speech is free, which–

QUESTION: You’re asking us to say that the Internet is not a public forum.

MR. WAXMAN: The Internet is … certainly is, like other public forums, subject to reasonable time, place, and manner restrictions…. If a park policeman finds somebody sitting on one of the benches on the National Mall making a speech with a bull horn or speaking in such a loud voice that it can be heard by others, and using patently offensive language, I don’t think there’s anything constitutionally impermissible with saying, sir, if you want to do that, there’s a specific place on the Mall for that.…

[T]he CDA is a content based blanket restriction on speech. …Given the vague contours of the coverage of the statute, it unquestionably silences some speakers whose messages would be entitled to constitutional protection.…

We are persuaded that the CDA lacks the precision that the First Amendment requires when a statute regulates the content of speech. In order to deny minors access to potentially harmful speech, the CDA effectively suppresses a large amount of speech that adults have a constitutional right to receive and to address to one another.…

It is true that we have repeatedly recognized the governmental interest in protecting children from harmful materials. …But that interest does not justify an unnecessarily broad suppression of speech addressed to adults. As we have explained, the Government may not “reduc[e] the adult population … to … only what is fit for children….

Under the CDA, a parent allowing her 17 year old to use the family computer to obtain information on the Internet that she, in her parental judgment, deems appropriate could face a lengthy prison term. Similarly, a parent who sent his 17 year old college freshman information on birth control via e-mail could be incarcerated even though neither he, his child, nor anyone in their home community, found the material “indecent” or “patently offensive,” if the college town’s community thought otherwise….

The Government … assumes that the unregulated availability of “indecent” and “patently offensive” material on the Internet is driving countless citizens away from the medium. …The dramatic expansion of this new marketplace of ideas contradicts the factual basis of this contention. The record demonstrates that the growth of the Internet has been and continues to be phenomenal. …The interest in encouraging freedom of expression in a democratic society outweighs any theoretical but unproven benefit of censorship.

[T]he Court has previously only considered laws that operated in the physical world, a world that with two characteristics that make it possible to create “adult zones.” …A minor can see an adult dance show only if he enters an establishment that provides such entertainment. And should he attempt to do so, the minor will not be able to conceal completely his identity (or, consequently, his age)….

The electronic world is fundamentally different. Because it is no more than the interconnection of electronic pathways, cyberspace allows speakers and listeners to mask their identities. Cyberspace undeniably reflects some form of geography; chat rooms and Web sites, for example, exist at fixed “locations” on the Internet. Since users can transmit and receive messages on the Internet without revealing anything about their identities or ages, however, it is not currently possible to exclude persons from accessing certain messages on the basis of their identity.

Until gateway technology is available throughout cyberspace, and it is not in 1997, a speaker cannot be reasonably assured that the speech he displays will reach only adults because it is impossible to confine speech to an “adult zone.” Thus, the only way for a speaker to avoid liability under the CDA is to refrain completely from using indecent speech. But this forced silence impinges on the First Amendment right of adults to make and obtain this speech.…

DIRECTIONS: Answer the Key Question in a well-organized essay that incorporates your interpretations of Documents A-H, as well as your own knowledge of history.

KEY QUESTION: Argue whether or not Congress should be able to ban “indecent” or “patently offensive” speech on the Internet.