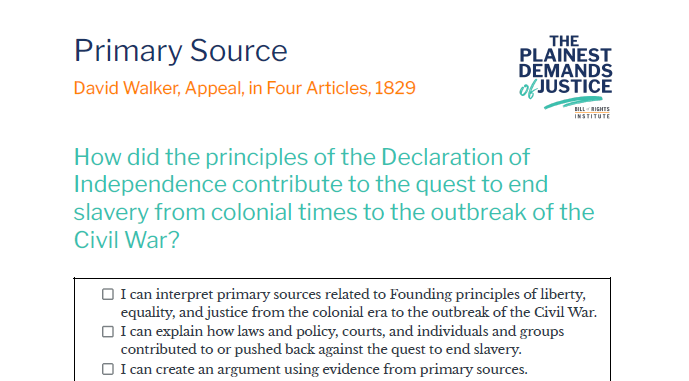 The son of an enslaved father and a free mother, David Walker published his pamphlet, Walker’s Appeal, in Four Articles; Together with a Preamble, to the Coloured Citizens of the World, but in Particular, and Very Expressly, to Those of the United States of America, in 1829. Although he was never enslaved, Walker witnessed the evils of slavery and racism during his childhood in North Carolina. After moving to Boston and setting up a clothing store, he found himself in the company of activists who shared his desire to end slavery. Before writing the pamphlet, Walker contributed regularly to Freedom’s Journal, the first African American newspaper published in the United States. Unlike gradual emancipationists, who believed the enslaved should be gradually freed, Walker urged enslaved people to rebel against their masters to bring about an immediate abolition of slavery. In his arguments, he made heavy use of biblical and historical references and cited the Declaration of Independence. The following passage comes from his concluding thoughts.

. . . Remember Americans, that we must and shall be free and enlightened as you are, will you wait until we shall, under God, obtain our liberty by the crushing arm of power? Will it not be dreadful for you? I speak Americans for your good. . . . Throw away your fears and prejudices then, and enlighten us and treat us like men, and we will like you more than we do now hate you . . . America is as much our country, as it is yours.–Treat us like men, and there is no danger but we will all live in peace and happiness together.