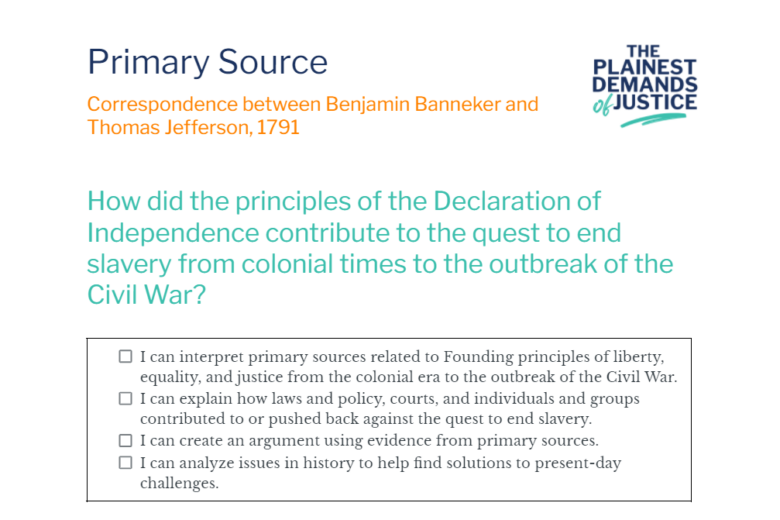 Benjamin Banneker was born free in Baltimore County, Maryland. He was largely self-taught and developed skills in mechanics, astronomy, and mathematics. He built an irrigation system for his family’s farm and successfully predicted lunar and solar eclipses. Banneker’s intelligence came to the attention of the Ellicott family, Quakers who grew prosperous by setting up grist mills in the Baltimore area. George Ellicott loaned books to Banneker and recommended that he work with his cousin, Andrew Ellicott, in surveying territory for the nation’s new capital city, the future Washington, DC. Banneker conceived of the idea of publishing an almanac of his astronomical calculations and was encouraged by leading Quaker abolitionists, who thought such a work would help combat the belief that blacks were intellectually inferior to whites by nature. (This view was put forth by Thomas Jefferson in his 1785 Notes on the States of Virginia.)

. . . I suppose it is a truth too well attested to you, to need a proof here, that we are a race of Beings who have long labored under the abuse and censure [criticism or disapproval] of the world, that we have long been looked upon with an eye of contempt, and that we have long been considered rather as brutish than human, and Scarcely capable of mental endowments [capabilities] . . .

This Sir, was a time in which you clearly saw into the injustice of a State of Slavery, and in which you had just apprehensions of the horrors of its condition, it was now Sir, that your abhorrence [feeling of hatred or disgust] thereof was so excited, that you publicly held forth this true and invaluable doctrine, which is worthy to be recorded and remembered in all Succeeding ages. “We hold these truths to be Self evident, that all men are created equal, and that they are endowed by their creator with certain unalienable rights, that among these are life, liberty, and the pursuit of happiness.

Here Sir, was a time in which your tender feelings for your selves had engaged you thus to declare, you were then impressed with proper ideas of the great valuation [value or worth] of liberty, and the free possession of those blessings to which you were entitled by nature; but Sir how pitiable is it to reflect, that although you were so fully convinced of the benevolence of the Father of mankind, and of his equal and impartial distribution of those rights and privileges which he had conferred [given] upon them, that you should at the Same time counteract his mercies, in detaining by fraud and violence so numerous a part of my brethren [friends] under groaning captivity and cruel oppression . . .

I thank you sincerely for your letter of the 19th. instant and for the Almanac it contained. Nobody wishes more than I do to see such proofs as you exhibit, that nature has given to our black brethren, talents equal to those of the other colours of men, & that the appearance of a want of them is owing merely to the degraded condition of their existence both in Africa & America. I can add with truth that no body wishes more ardently to see a good system commenced for raising the condition both of their body & mind to what it ought to be, as fast as the imbecility [degraded state] of their present existence, and other circumstance which cannot be neglected, will admit. I have taken the liberty of sending your almanac to Monsieur de Condorcet, Secretary of the Academy of sciences at Paris [opponent of slavery and member of the French Academy of Sciences], and member of the Philanthropic society because I considered it as a document to which your whole colour had a right for their justification against the doubts which have been entertained of them. I am with great esteem, Sir, Your most obedt. humble servt. Th. Jefferson