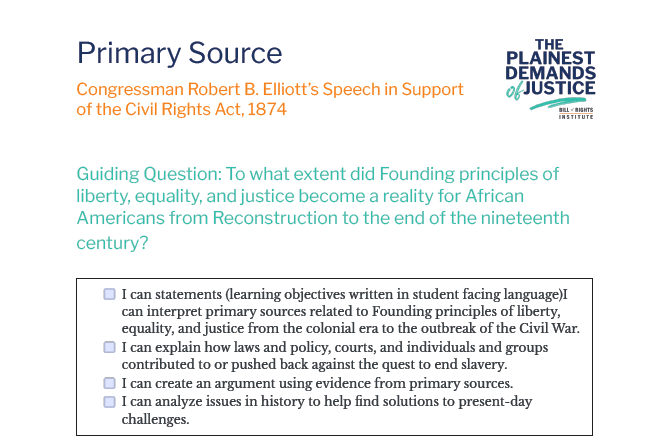 Well educated and a gifted speaker, Robert B. Elliott rose to prominence in the Republican party following the Civil War. He served two terms in the U.S. House of Representatives for South Carolina in the 42nd (1871–1873) and the 43rd Congresses (1873–1875). While serving, Elliot spoke unwaveringly for Black civil rights and against Klan violence. His speech below was given to argue for a civil rights bill for African Americans. Elliott continued to protest the lack of civil and political rights for African Americans in the South until his death in 1884.

Congressman Robert B. Elliott’s Speech in Support of the Civil Rights Act, 1874

. . . To arrest its [slavery’s] growth and save the nation we have passed through the harrowing [distressing] operation of intestine war . . . absolutely necessary to extirpate [destroy] the disease which threatened with the life of the nation the overthrow of civil and political liberty on this continent. In that dire extremity the members of the race which I have the honor in part to represent—the race which pleads for justice at your hands today, forgetful of their inhuman and brutalizing servitude at the South, their degradation and ostracism [excluded from a group] at the North—flew willingly and gallantly [in a brave or heroic manner] to the support of the national Government. Their sufferings, assistance, privations [lack of the usual necessities], and trials in the swamps and in the ricefields, their valor on the land and on the sea, is a part of the ever-glorious record which makes up the history of a nation preserved, and might, should I urge the claim, incline you to respect and guarantee their rights and privileges as citizens of our common Republic.

. . . The passage of this bill will determine the civil status, not only of the negro, but of any other class of citizens who may feel themselves discriminated against. It will form the cap-stone [crowning achievement] of that temple of liberty, begun on this continent under discouraging circumstances, carried on in spite of the sneers of monarchists and the cavils [unnecessary objections] of pretended friends of freedom, until at last it stands in all its beautiful symmetry and proportions, a building the grandest which the world has ever seen, realizing the most sanguine [optimistic] expectations and the highest hopes of those who, in the name of equal, impartial, and universal liberty, laid the foundation stones.